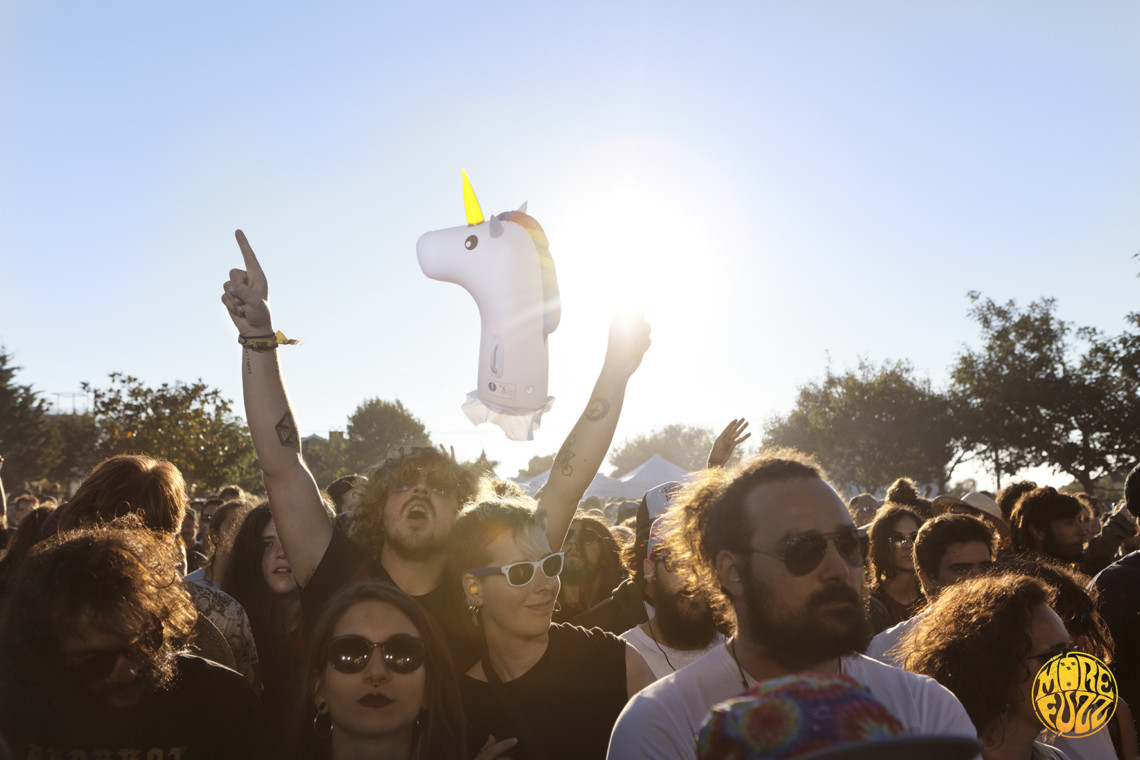 AAAAAHHH August, that month of the year you know you will have a very good time for a couple of days in a small town in the north of Portugal bathed by a gorgeous beach.

This year I was fortunate enough to be back at this amazing festival with a stupidly godly line up one day earlier to check the opening acts at Paredão 476 and Ruivo’s Bar, and that got to be one of the best decisions I’ve made this year!

The Warm-up parties started mid-afternoon at Paredão 476 with the Portuguese Stoner Doom group Heavy Cross of Flowers, and I have to say, they caught my attention super hard, a stomping groove pounding away any leftover of salt on my face, a rumbling bass that exorcized the smoke that I had on my lungs and a powerful guitar duo topped with some harsh and strong vocals, be aware they have an EP almost out at bandcamp!

After a neck workout, Sombra enters the stage, the fellow Iberian band from Oviedo provided a psychedelic rock with major progressive and stoner vibes, a perfect set up to behold the falling of the sun from the sky.

Some hours forward and from the darkness of the night appears Pledge a Portuguese band heavily rooted on hardcore, too bad the guys had so many technical difficulties and had to wait to play for 1 hour, but the crowd responded well and got to be one of the craziest and wild audiences of the festival, with people constantly participating in pedagogical activities like crowd surfing inside the bar, stage diving from the speakers and climbing to the plastic ceiling.

To wrap up the warm-up night the final band was also from Spain, Acid Mess another project by the bass player and guitarist of Sombra that played on previous editions took us on a trip through colours and planets with a soundtrack of a warm psychedelic rock.

The sun is shining, the wind is blowing and a colourful mass of fuzz addicted slumbered into the pool stage, to be welcomed by the talented Portuguese band Solar Corona their infectious grooves, bass-driven riffs whirlwinded us into multidimensional time travels through cosmic radiation. Unfortunately, Solar Corona doesn’t have a lot of music put out, but I bet there is a lot of people looking forward to being fed soon.

Next up Desert Smoke enters the stage, a group of guys that met on last years edition and set a goal to play on this year Sonic Blast, they have been made some live shows throughout the year, even opened up to Ancestors on the beginning of the year.
The bass carried us through desertic landscapes while the guitars produce sonic fractals that unleash the minds of the listener through higher realms.

By the very few songs that I catch of Atavismo it seems to have a very Spanish influenced rock sound, it sounded fun and good to enjoy some dives in the pool!

AH! The love of every Portuguese psych rock fan Astrodome, their mature eclectic sound filled my anticipation of seeing them live for the first time, these guys have the IT factor, I don´t know what it is but they have it, I will not be surprised if I see these guys playing with major names all over the globe!

To finish up this psychedelic gourmet course what could be better for dessert?T the amazingly talented instrumental trio from Northern Irelan, presented us with a delicious exotic jazz jam perfect with some last dive on the pool.

As soon I hear the chords of Thunderhoof I climbed that hill like I was running for my life, and TO DEEEEEEEEEEEEEEEEEEEEEATH it was! Crushing tones, gain all the way up and the freakin’ vocals were on point! Probably worked better at night, but well…

Super excited to see these guys, and they delivered it! A cosmic and spiritual voyage through black holes and supernovas, too bad their gig was during the daytime, because they brought sick visuals and I can just imagine what would be that like! One of my favs most definitely!

I didn´t catch up Nebula because I’ve seen them in Bristol Psych fest (review here), but they delivered their desert rock sound and played the classics for the enjoyment of the crowd.

Big heavyweights on the line up this year, and I was stoked, I can scratch that from my bucket list! Causa Sui live, YES! Their sound is hard to describe but their intelligent compositions and atmospheric passages proved that they are at the top of their game, and if you ask 100 people which gig was the favourite one was probably 70 ou 60 of them will say Causa Sui, that’s how good it was!

Another candidate to heavyweight champion was the German trio, that delivered a very heavy repertoire, on the contrary of the latest release “One With the World” that had more of that “Shavasana” incorporated, one of the best performance of the festival for sure!

Out of nowhere the German duo came out of the blue and hammered the final nail on the coffin, very aggressive sound on the likes of Nails, a punkish attitude and probably the sentence of the entire festival and I quote (clears throat): “I know this is a hippie festival but tonight is Friday night and it’s the night to start drinking and start fighting!” Well, mister, the process of drinking beverages will continue but we will not participate in violent duties over here, because we are hippies…

End of DAY ONE the party will go on at Ruivo’s Bar with a DJ-set, I prefer to go back to the tent and jam with the family. Man I’ve missed this festival, this almost family environment that goes on, the bands hanging out with the fans, the electric energy in the air is palpable!

I almost feel wrong not to talk about bands from the pool stage but there is so much stuff I want to write about that I have to cut short… Anyway, the day was highlighted by The Wizards, Talea Jacta, Greengo, Ruff Majik and Purple Hill Witch with their fuzzy Sabbath doomesque sound with occult lyrics and head bouncing grooves carried the last of the survivors of the pool domain.

Mr. Evileye : Sonicblast might have awesome headliners, you can also discover the next generation during the day at pool stage ! Talea Jacta is Joao Pais Filipe ( also in Paisiel ) behind the drum and Pedro Pestana ( also in 10000russos ) for the space guitar. It was their 10th gig and they didn’t play for very long because of the tight schedule but I want to say it was the perfect music for starting the day under the sun ! An interesting beat that keep your head clear behind Pedro’s loops for sending us a rhythmic spatial music ! One more thing, these guys are not anybody because they had the chance to jam more than two hours with Electric Moon one month ago so let pray the psychedelic’s gods to get something out of them !

And it started as probably my best night in a long time.

Kicking it off with Naxatras, their positive vibes echoed throughout the venue, and I probably never danced so much at a rock concert before, you can’t simply deny it, Naxatras makes music to dance and to smile with the sunset still warming your slightly sweaty skin, unfortunately couldn’t meet the guys just to say how much I love their music and to simply meet the people behind this masterpiece.

Very energetic, they blew up the house, the legendary band put up a show and the crowd responded well, this was the perfect gig to sit next to the stage and recharge some energy with some food.

YES! My favorite gig of the entire festival, with a set list filled with their greatest musical accomplishments they proved to many people that they are not just another Stoner Rock band, they have a dominant presence on stage and their music is able to get all the people to sing at the top of their lungs their lyrics, one of the gigs that I had the most fun right in the middle of the crowd.

Kadavar picked up where they left off last year, they were supposed to headline last year’s edition but couldn’t because of the birth of a “Kadavarian”, this year they managed to come back and blew up the entire place down, the 70’s krautrock mixed with heavy and thunderous riffs filled the small town of Moledo and sent us all to oblivion with a very diverse setlist.

These guys are one of those bands you know…amazingly talented 3 piece, hard-hitting Mario conducted this psychedelic orchestra in a stellar way, Isaiah probably born with a guitar in his hands can lead all kind of tempos and sing at the same time, and Mike is a very focused bass player that keeps everything in the pocket all the time, they managed to play two songs from the new album “Black Heaven” and even jam around “Communication Breakdown” by Led Zepellin.

An amazing show that is in the top five this year for sure!

To finish this year’s SonicBlast, the Portuguese fuzz rockers The Black Wizards were in charge of sending us home with their 70’s classic rock vibe, they are slowly becoming one of the most captivating Portuguese bands, with tours all over Europe this year, a new album, they are on a run.

The lead guitarist and singer, Joana, that sometimes almost sounds like Janis Joplin (chills) launched a store with 70’s inspired clothes and accessories if you interested check this out, FuzzyEye !

Congrats The Black Wizards, it’s always a pleasure to see you live!

And we are at the end…again…Great memories to bring back home, new friends, new music to listen to, and the agonizing pain of waiting for another year to be present at SonicBlast again.

I just want to thank for the amazing work of the organization, all the staff, the locals of Moledo, the bands for the amazing experience of being apart of this event, also want to thank Mr.Fuzz for make this possible once again, Mr.EvilEye for the pics, and all of my friends that came with me this year, Plutão always a pleasure to carry your small planet ass again, Eduardo hope you had a great time arrive sooner next year please you Bristolian bastard, Sergio, Fábio, Nuno, Pedro, Valdo (thank me later ahahaha), and Diogo it was a bummer that we couldn’t met and sing Pink Floyd songs all day long!

Mr. Evileye : Same thoughts as Mr.Innkeeper I really want to thank everyone here as Ricardo, Thelma, Iago and all those wonderful people who made that real and awesome for that second edition for me ! Thanks to Mr.Fuzz and Mr.innkeeper to put those fuzzy words with my photos, hope you enjoy this review as we enjoy being at this festival and maybe see you next year !