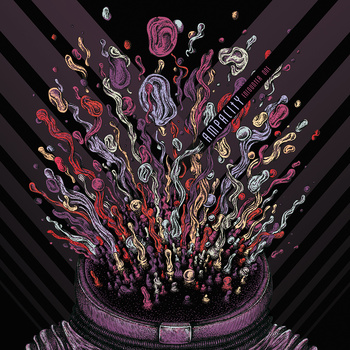 Let's blow your brain up, man !

Hello fellas ! What a good day, isn’t it? Feel that fresh air fondling your face, people turning into layers and the sun more and more absent. Well, winter is coming but the songs still remains the same as they said ! The next band I wanted to share with you is called Ampacity. I discover that band in a time where I could find anything new for me to listen to.. I felt like Youtube has betrayed me somehow… But as you all know Youtube’s sidebar is everybody’s best friend ! And the first thing that impressed me about this band is the artwork around their universe !

As I clicked on their song “El ultima Hombre“, I found myself in front of a astronaut ! We know that figure through classical Sleep’s artwork, or even The Cosmic Dead, which is here to tell you that you’ll fly while listening to their songs ! But when I took a closed look at theirs, I begun to recognize pieces of ears, and brains all over the place. And that’s where I discover one of the best instrumental bands of the year.

You’ll hear some few vocals on their 20min long master-piece “Masters of Earth“, but i like to put bands in boxes so for me this is a pure instrumental band ! (joking)

I consider Ampacity to be one of the few instrumental bands where I never missed any vocals at ALL ! Who ever wanted the mighty John Garcia to stay for a next round with Karma to Burn ? In space, no one will hear you scream right ? Those guys will make you forget that a singer can be in one of those bands. You will witness here what I call a real musical symbiosis. Every member of that band is totally aware of what the others are playing. They are all playing together to give you the best psychedelic trip you’ll ever had ! It is so good to be able to feel their true symbiosis through their songs, this is what music is all about ! Songs like “El Ultima Hombre” can easily be compared to what I consider to be one of the best Causa Sui’s songs, “Summer Sessions Part1&2“. They are all working for the song in its entire piece, as a journey, a trip to nowhere. The couple of songs you’ll find on Youtube will easily put the scene of your future nights. Their sweet intros will take you to the next level, even into a big sleep that you’ll never forget.

So I kept on listening to them and I quickly heard Earthless’ guitar sounds while “El Ultima Hombre” was filling up my room ! I ironically said to my self : “Allright, here we go again, come on let’s give me my daily dose of never-ending guitars solos !” But I was fucking wrong ! Ampacity is not like that at all, they have more similarities with bands like My Sleeping Karma, this is more about setting an atmosphere rather than feeling like Jimi Hendrix never died ! Ampacity came up with the good recipe than define the band as a great instrumental band. This is massively melancholic, powerful and tripping ! Those guys have to make it to next year’s DunaJam ! Can you begin to picture it ? Feet in the sand, head in the smoke and your ears stuck on Ampacity’s melody playing on sand 😉 That could totally do it ! But this should definitely be played at dawn !

I don’t know why but I recommend you to listening to it at night, like the first time you ever listen to Ummagumma. I’m not trying to say that this is as good as Pink Floyd but this how I pictured it. So if you feel like it, put your headphones on, get your warmest coat and gloves, and go out for a midnight walk. Before starting your usual never-ending self-conversation I suggest you may start with an appetizer, as your chef, I’ll recommend you to start with the song called “Asimov’s Sideburns“. You’ll tell me that it taste a bit like Earthmass, and I’ll tell you that it is a good thing, isn’t it ? So please keep your head and mind up to the stars, and feel Ampacity embrace your mind.

Good day, Good night and have a good & safe trip !