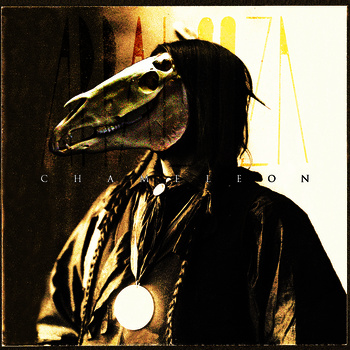 Saw those Frenchy live once, they’re coming from Brest, the city situated the most at the West of France. That’s why they maybe chose to call themselves “Appalooza“, a cool-looking horse coming from the West of America 😉 Well it’s also maybe because their music makes you think you’re riding an Appalooza in the plains, galloping as fast as he can !

I remember the concert was very cool with 4 french Heavy bands (Jackhammer, BigSure, Seeds of Mary and Appalooza), each having their own style. BigSure and their Psychedelic Stoner Rock was my favorite show that night. Then it was Appalooza, playing a fast-paced Stoner Rock with QOTSAesque/Red Fang sonorities, these guys know how to rock !

They just released a 4-track EP called “Chameleon”, it is a little bomb of catchy riffs and heavy sounds full of fuzz ! The first track ” Obsolescence” directly puts you in a raging mode with a colossal riff ala Kyuss ! Too bad the vocals are not screamed enough, it could make their whole sound way better and could drop this strong Josh Homme association 😉

“Glory Pain” is in the same “fury” vein as the first track, I even smell some Metallica during the heavier parts haha 🙂 “Chameleon” definitely has that robot-rock attitude with a nice awkward riff followed by a liberating and more open chorus. I do like when that riff is repeated a bit later in the song, like a little game between the two guitars, sweet move !

“Matador“, the last track, starts off with another blazing riff like if it was a mix of Avon and Supa Scoopa And Mighty Scoop 😉 And I agree with what the great FDJ told on Bandcamp : “Maybe a little close to their heroes at times but what the hell!, these tunes rock!“.

So if you need your daily dose of fuzz and headbanging, don’t hesitate to check out Appalooza ! I’m eager to ear what will come next, hoping they’ll try to build further their own sound !

Forced Rejection – Beyond This Path