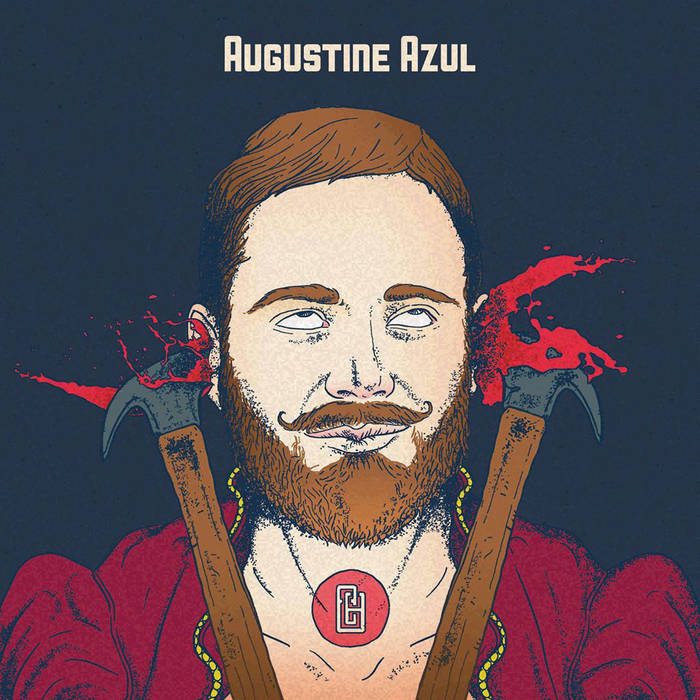 Smashed by the Groove !

As a music blogger and as a fuzz addict, I listen to so many different bands on a daily basis. So my first impressions on something I just heard is very important to me, it just ticks or not during the first few seconds of a song. Today’s band, Augustine Azul, coming from Brazil, was one of the few bands that instantly made me say : “Oh fuck, this is a huge, I already know I’m going to play this record so many times !“. Let’s discover why below, and I hope by clicking the play button you’ll feel the same thing as me :

First let’s say a big thanks to our “Bandcamp King”, Mr. FDJ (follow him on BC), for buying this wonderful piece of heavy-groovy songs and making it appear in my feed. Otherwise this release from the beginning of the year would have slip through my ears, certainly like many other cool albums…

It’s difficult for me to explain what happened with Augustine Azul, but I really became addicted to this 7-tracks EP in the last few weeks. This trio just crafted the catchiest music I heard in a while, and this is the case with every single song on this release.

Some people prefer music when there are some vocals because they might find instrumental music boring at times. I assure you this won’t be the case with Augustine Azul. Yeah, it might be instrumental, but the short duration of the songs, the amount energy delivered, and the constant variation in riffs, melodies and rhythms, make it so irresistible and groovy as hell.

I haven’t talked about the genre of this band yet. It’s quite difficult to categorize them, they’re on the heavier spectrum of music for sure, but I’d say the definitely have a jazzy-proggy feeling and that’s what make them so addictive.

In addition to that, the flow of the songs are just perfect, not a riff is here to fill a void. Nope, you’re just embarked in a constant flow of fuzzy-awesomeness ! And each musician in this band fully plays his role : A bassist with a delicious slamming sound and a skillful jazzy drummer, both having an immense groove living inside of them. And of course, the guitarist, who still amazes me, has that ability a few has, to play the catchiest riffs and melodies all the fuckin’ time. As an example, he reminds me Parker Griggs from Radio Moscow or Isaiah Mitchel from Earthless. This is a real trio !

Now don’t tell me you didn’t move your head on this superb EP. Augustine Azul proves they are a lot of amazing underrated and underground bands that still need to be discovered, and I’m proud I can help them doing this by putting them under the spotlights on More Fuzz.

Need a boost and tired of everyone pulling a face ? Here is your medicine.

I wish they have a full-length in the pipe, I really need more songs from them 😉