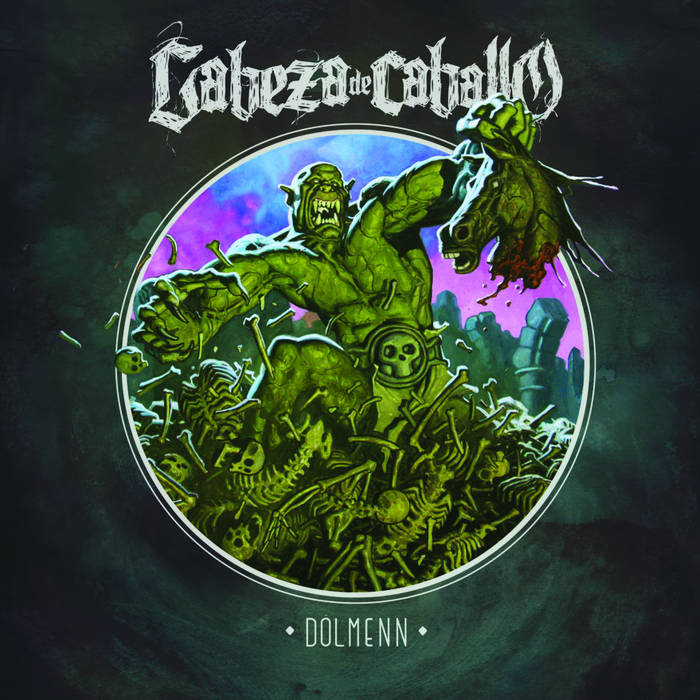 This is the soundtrack for the Paleolithic Age!

“Dölmenn” is their sophomore LP, released 4 years after their debut “Iron And Wood” thru the fantastic spanish record label Discos Macarras. The album title refers to the single-chamber megalithic tombs erected by ancient civilizations. Also, metaphorically speaking, the band argues it refers to “a symbol made stone, a stone in the path serving as a reference, closer to the connection between mankind and nature”.

After you hear it you’ll know this album is powerful release, but I have to give a special mention to the fantastic cover artwork created by Spanish cartoonist Rafa Garcés, the one responsible for the covers of Horn Of The Rhino albums.

The album kicks off with “Last Words Of Walter Kovacs” (a reference to one of Watchmen’s main characters Rorschach) creating a somber atmosphere thanks to some downtuned riffs and hard hitting drums. After 1:27 minutes of doomy intro the song explodes in your face accelerating the tempo to deliver some stonerized metal. “Whateley’s Baby” continues with the mood created by the previous song, in this sense, is a fast and straightforward Thrash Metal piece in which Javyer delivers some good raspy and harsh vocals.

“The Dölmenn” is a song which reflects the diversity of musical influences of Cabeza de Caballo. Here you can hear elements of NWOBHM bands, the ferocity of Motörhead’s early years, swampy guitar tones closer to Baroness’s first albums. One of the highlights of this song is the massive sound created by the rhythm section, so a big applause goes to José and Antonio for the incredible job.

The second part of the album starts with “Cahrahb I. Arise To Earth”, an acoustic piece which reminds me those moments of beauty and calm created by Mr. Iommi in Black Sabbath’s first albums. This song works as a bridge for the most ambitious and complex track of “Dölmenn”, a musical Armageddon that waits for us before the album comes to an end: “Cahrahb II. The Lazy Demon._Cahrahb III. The Awakening”. Clocking at almost 14:00 minutes, this song sums up all the musical diversity presented throughout the album, and to keep things more interesting it has some magnificent guitar arrangements with a prog/psych vibe all around it.

After finishing hearing their sophomore album, you have the certainty that Cabeza De Caballo has become an excellent band, with strongest musicianship and writing skills. They have fulfilled the promise presented with “Iron and Wood” 4 years ago. The global heavy scene should not ignore these guys.

You can buy the vinyl at Discos Macarras’s bandcamp and website. It should be a fantastic add to your vinyl collection!