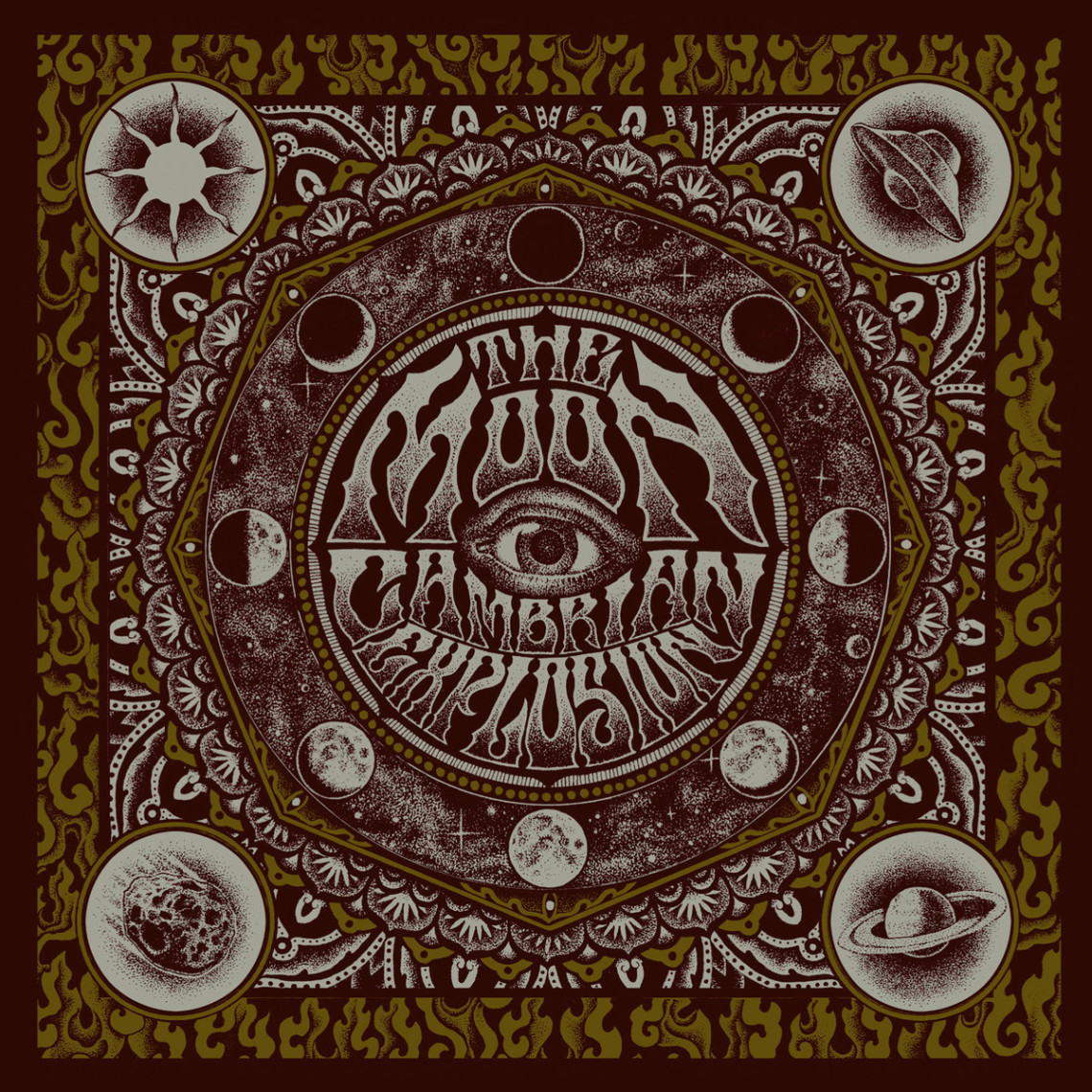 They call themselves the cosmic sorcerers from Portland. Nori Lockhart, Ben Dorothy, Derrin Twiford and Archie Heald together form Cambrian Explosion and play a cool mix of stoner and psychedelic rock. After they released a brilliant debut EP called The Sun in 2013, The Moon EP is the logical second, but with it’s almost 40 minutes in length, The Moon is closer to a full length than the The Sun. In between the two they did a split with the band Foxy Lemon which was released in February last year. With the release of The Moon living up to the high expectations after The Sun, the band has really turned some heads in their direction, including mine.

Nori Lockhart seems to be the creative mind behind this masterpiece. He is the lead guitarist and singer of the band, but also the artist behind the beautiful cover art. His heavy riffs create a solid stoner rock sound while the clean, psychedelic melodies create a sound that has its roots closer to the 60’s. His guitar playing, but also the vocals and the percussion have oriental influences which make their sound unique and interesting. A roaring organ adds the extra layer to really rock out in some of the heavier parts and complement the fuzzy guitar riffs. All merged together with a groovy bass, tight drums, droning effects and hums, and you have the beautiful mix of sounds which can be called The Moon.

A subtle introduction to the album, ‘Selene’, with a lot of sounds, effects and noises, is more like the extended intro of their second track than a song on its own. It gives us a sneak preview of what’s about to come and ends with the catchy guitar riff that remains the main theme of the second song, ‘Looming Eye’. Fuzzy riffs and wah wah guitar solo’s shape the rest of the song together with the recurring hypnotizing melody.

‘Mugen = Mugen’ starts with a high energy riff, played both by the organ and the guitar and gives us a strong heavy psych vibe. Only to completely shift the sound to trippy and mesmerizing after a few minutes. Clever guitar melodies, soft bells, percussion and foreign vocals create a psychedelic oriental vibe. ‘Innocous Creatures’ is a little darker and builds up to some more heavy guitar violence in a stunning 9 minute song. The best riffage of the EP has yet to come and shows up in the fifth song, ‘Crust of Theia’, which ends the EP with a thick, fuzzy groove. The guitar lays down this slow and deep groove and is bound to create at least some satisfactory head nodding.

Plenty of different sounds, instruments and effects shaped these 5 brilliant songs. Guitar, bass, drums, flute, sitar, organ and synthesizers altered with reverb, delay, wah wah, fuzz, phasers and probably a lot more effects. These guys really paid attention to creating different vibes and ambience and did it completely right. The Moon won’t get boring soon and you will find yourself playing these tracks over and over again. The Moon, as well as The Sun, can be downloaded for free at their bandcamp page, but don’t hesitate to support these guys.

Zoning out and a journey of introspection. This album will drift your thoughts away.

Let’s hope their music will be around just as long as the evolutionary event they’re named after 25 million years.