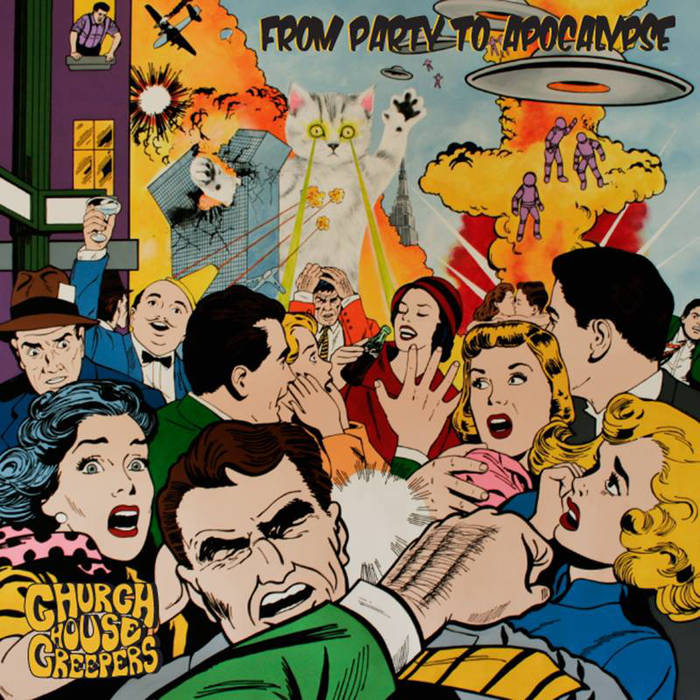 Can we all just take a moment to soak in that album art? Explosions, alien abductions and giant cats with freakin’ laser beams coming out their eyes! That sentence is perhaps the best way one could describe this album.

Churchhouse Creepers are a 3-piece stoner rock/party rock outfit from Iceland, a country that has produced some interesting artists over the years, yet none of which I would characterise with 1950’s pop art. Perhaps the cold, bleak conditions that were a petri dish for the introspective post-rock movement (Sigur Rós being the obvious example) were, to these guys at least, a reason to say “Bollocks to going outside, I’m gonna have another drink.” I assume the giant laser cats followed shortly after.

I really can’t talk about this album without discussing tone. Now I don’t mean fat distorted guitar riffs and basslines because, you’re on More Fuzz; that’s a given. No, by tone I mean mood, character and overall ethos. This is not a joke band, but a great band having a good joke.

We literally get straight to the party with the opening track called (yep, you guessed it) “Party“.  It’s refreshing to hear surprisingly intelligent songwriting rooted in lyrical themes of getting stupidly drunk and the self-explanatory concept of “No Monday“. This juvenile sophistication lets them get away with that most basic of musical faux pas – tempo changes. Now I’m not talking double to half time, “What Mamma Don’t Know“ has a completely different rhythm between verse and chorus. I know of people that are really bothered by that, but you just can’t be bothered by anything on this record. You’ll be too distracted by the fingers dancing up and down your air guitar the whole time.

If that isn’t entertainment enough, by the time “Drunk Something“ has you singing along to “GET DRUNK AND HAVE FUUUUUUN” there are few fuzzheads cynical enough to not be onboard.

There’s a comparison I can’t help but make to Wretch-era Kyuss. It doesn’t necessarily sound the same, but it has a similar feel. They really capture that buzz and excitement from tracks like Katzenjammer and Isolation. But whilst most of the album is fast and punky, there is a constant undertow of groove. I think that’s perhaps what I love most about this album – they don’t take themselves seriously, just the music.

I wasn’t so much beaten by a barrage of fat, heavy riffs as I was struck with creative admiration for the clever hooks. Kind of like fast-forwarding through an 8-minute prog track; you briefly forget the laser cats and explosions as you’re washed away by the waves of genuinely great songwriting. Nowhere does this shine through more than on closer, “Apocalypse” (see what they did there? 😉 ). Whoever’s idea it was to end things on the longest jam of the whole album deserves a bloody medal. They flit between classic heavy groove and math-rock-fast scale licks like it’s nothing, then see things out with a tasty guitar solo.

ChurchHouse Creepers are overall, pretty hard to read. Between the dumb lyrics, the complex riffs with a simple groove, and the weird tempo changes the best I can come up with is to call From Party To Apocalypse a work of ironically immature genius.

Wasted, in muddy festival field, while dancing your ass off.

Churchhouse Creepers only formed a couple of years ago and so chances of seeing them live are slim unless you live in Iceland. Let’s hope that changes in 2016, would love to see these guys play some European festivals soon!