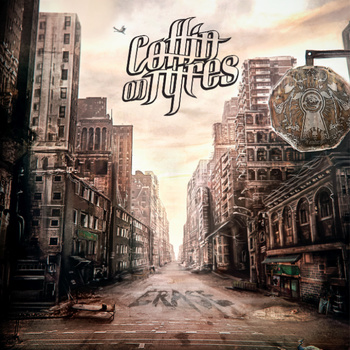 Proud to be French !

Yes I am ! Because today’s band, Coffin on Tyres, will certainly be featured in my TOP Album of 2014 ! Hailing from the French capital, these 5 dudes will blow your head up ! ERASE, their 2nd album released in the beginning of November, is a phenomenal piece of music, in the purest tradition of fuzzy Stoner sounds 🙂

To give you an idea, it has a lot of similarities with Palm Desert, but with a greasier mind, a higher dose of Whiskey in their veins…  And they aren’t joking here, 9 tracks totalizing more than 60 minutes of face-melting riffs coupled with one of the best Stoner voice I ever heard. Geoffrey is a real beast, blasting words with an impressive force, it is even more energetic with the heaviness of the instruments behind !

Right of the bat, the first track will show you what’ll be coming at light-speed, right between your 2 eyes, during the following hour 😉 Some fuzzed-out notes followed by a killer groovy riff, soon followed by another burning riff and a huge roar ! Take That Motherfucker !

But of course I mentioned Palm Desert, because as the Polish, Coffin on Tyres also knows when to use the reverb and delay pedal and pause the vocals. This can be seen in “Erase, destruct then fix up again” or “Pacify“, without forgetting, of course, the last song, “Leeches“, a 15 minutes epic song I’m going to let you the pleasure to discover it 😉

Want a sneak peek of this colossal sound ? Go directly at 3:36 of that song below, trust me, go directly at that exact moment !

Now go and listen to the whole album and buy it, make yourself a pre-Christmas gift 😀