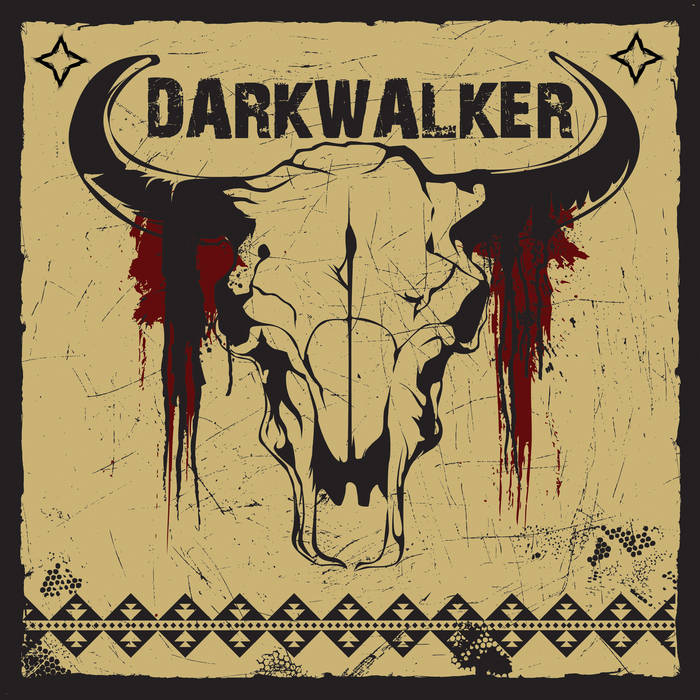 Also check out our interview with Darkwalker lead vocalist Derek, who gives us an insight into the inspiration behind the album and the creative process that brought it to fruition.

Wastelands is the debut album from Los Angeles Alt/Hard Rock outfit Darkwalker. Released in September 2015 via Basement Records the band describe themselves as “a sun burnt, Gibson slingin’ stoner rock/grungy/doom band.” Whilst the album is “a crash course in Sabbath fandom with lyrics culled from Stephen King’s The Dark Tower series for inspiration.”

Stephen King wrote in the foreword of The Dark Tower that he chose the setting for his books after seeing the classic Sergio Leone film The Good, The Bad and The Ugly; wanting to portray a sense of quest against a majestic western backdrop.

With their choice of album title and artwork Darkwalker have definitely managed to evoke that same mental imagery.

The opening track, “Black Thirteen” is the first single to be released from the album. The song builds in layers: first the drums solo, then a dark guitar riff takes over before the vocals kick in and the sound grows to set the scene of a desolate land with death lurking all around.

More classic rock follows with “Gunslingers” before we hear the higher-tempo, metal sounding track “The Dark Tower“. The fuzziest track on the album is “Memories Of Another Life“; a great guitar riff winds its way through the song like a rattlesnake, before it strikes and delivers a bite with a dose of psychedelic venom.

“Crimson King” is packed with powerfully emotive vocals plus the crowning glory of yet another fantastic guitar solo. “Drawing Of The Three” has some moody doom elements running through it whilst “The Battle Of Devar-Toi” opens with a nice bass groove and brings this epic journey to a dramatic conclusion.

To quote Stephen King once more he said of The Dark Tower “More than anything else, I wanted to tell a tale of wonder”. In my opinion, Darkwalker have certainly achieved that with this record and in some style.

Although each track can easily stand alone I would suggest putting aside forty minutes and listening to the album in its entirety to get the full effect.

You don’t necessarily have to read the books to enjoy this album, but I would highly recommend them!

Memories Of Another Life

I Am The Sun – Death Water Review