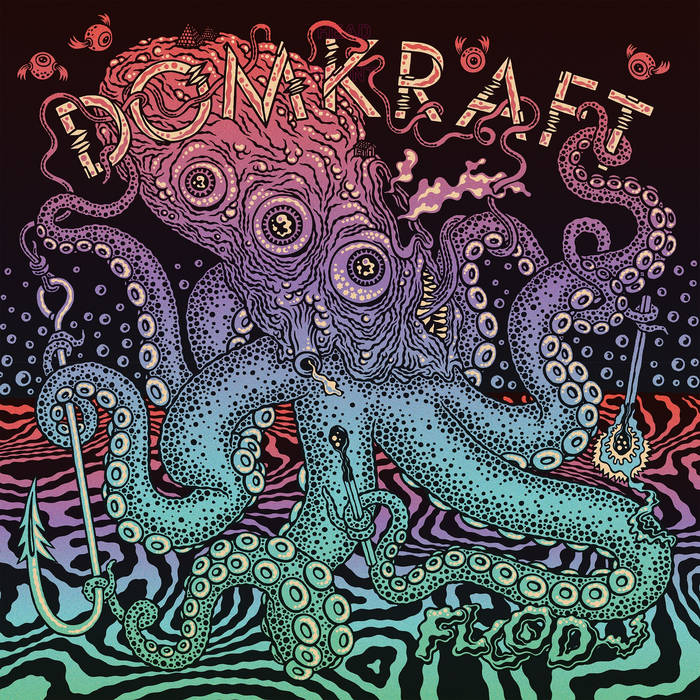 Doom. But not as you know it.

This Stockholm trio has elaborated a poisonous and highly addictive elixir labeled Flood. A concentrate of modern heavy inspirations you will not resist to taste !

There is something special about the modern stoner & doom Swedish scene. Month after month, our viking fellows keep on appearing as an inexhaustible source of creativity. Domkraft definitely makes part of these people following the path of Monolord. But not exactly. Stockholm trio opens his own path through this super prolific scene. How ? By cooking the best ingredients of modern heavy music together : a bit of post-metal spirit, some noise-rock influences and psychedelic passages mixed up in a doom pot.

Opener “Landslide” testifies to the impeccable coherence and progression from last LP The End of Electricity to Flood. Thunderous riffery directly takes you to the heart of Domkraft : dark and modern post doom soundscapes that will remind you the last opus. But second half of the song introduces the psychedelic inclination of the album – just listen to this delicious wah pedal – with space-rock influences.

Second track “The Watchers” did not strike my attention as much as the previous one because it is more rooted in modern sludge and doom vibes. It remains a very efficient one, with infectious guitar riffs. The kind of song you can listen over and over. Following track Flood also carries his load of sludgy riffs and strong singing. It highlights Domkraft capacity to handle more traditional doom metal compositions but still with modern sonorities. Neurosis would approve.

“They Appear To Be Alive” has the particularity of lasting only 81 seconds. It constitutes a kind of post-rock interlude which emphases psychedelic direction taken by Domkraft. Strength of “Sandwalker” lies in the intensity of composition and playing. Modern and noisy sonorities give birth to a loud atmosphere that reinforces Domkraft sound identity.

“Octopus” and even more the last track “Red Skies And Dead Eyes” perfectly conclude the album. Majestic riffs stand their grounds while psychedelia rises up progressively as a kind of insidious madness. The second one is particularly enjoyable : the song breaks into space-rock boundaries and draws an incredible astral atmosphere. I do not forget to mention corrosive ending guitar solo of “Octopus”. Il remains a remarkable passage of that release.

Mission completed for the Swedish band. The entire result is consistent and coherent. Domkraft manages to get the best from modern heavy universes and makes its own way in this flourishing scene. A great mastery, a hell of a good album.

You can’t choose what to listen to between your favorites heavy music tastes ? Flood should satisfy you.