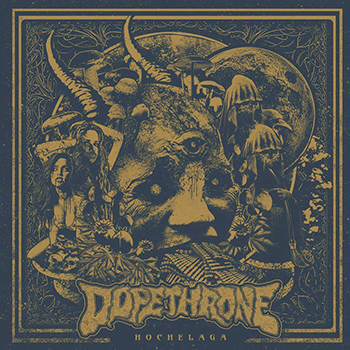 I would be surprised to find someone familiar with the stoner/doom/sludge scene who has never heard of Dopethrone, but just in case, here is a little catch-up for you. Self-proclaimed “the heaviest D.I.Y. trio from Canada”, they’ve been working with small but nonetheless amazing label records – STB Records and Totem Cat Records – to put out some of the nastiest sludge on the market since 2008. To give you a rough idea of what they sound, take Weedeater and EyeHateGod, put them in a blender and add Electric Wizard’s first LPs for the psychedelic touch. So, yeah, I guess you could say that Dopethrone is pretty heavy.

Hochelaga is their fourth LP and you can clearly hear that they decided to take their sound up to the next level : the riffs are rawer and rougher than ever. The drums and the bass plough you non-stop, it’s like being trampled on by a herd of stoned mammoths. Vincent, who’s also the man behind those insane riffs, sounds like a freakin’ demon who swallowed burning coals along with a few pints of acid and the shittiest whisky he could find. And you won’t find any relief in their lyrics either – it’s all about addiction, despair and loneliness. But Dopethrone does not deliver mere sludge as they mix the genres a bit. If Chameleon Witch and Scum Fuck Blues are straight up sludge, Vagabong and Riff Dealer wander a bit into the psychedelic spheres and lead the listener high, high above the mud and the creepy forests full of fucked up psychopaths and drugged up bikers.

If you have a few minutes to spare, go watch the video for their song “Scum Fuck Blues” just below. It’s a montage of samples taken from old movies and documentaries from the 60’s and it’s the perfect visual embodiment of Dopethrone’s music : it’s disgusting, nasty and violent, but it also shows that the band doesn’t take too seriously what they do. To give you an idea of what I mean by that, between two samples displaying people being grossly murdered and tortured, you can see a guy making rails of cocaine with a machete – you can’t go more ludicrous than that. The Whore Church  – the producers of the video – did a really great job capturing the essence of the band.

But the thing I find the most amazing about this pit of madness and heaviness is that you just cannot listen to this album without having a big smile on your face – and I swear it’s not because of the weed or the alcohol – the music is just too damn enjoyable. The whole thing makes you wanna go berserk and die in a blaze of booze, drugs and glory.

They are currently touring in Europe so if you can, I strongly recommend you to attend one of their shows : you won’t be disappointed. Trust me.