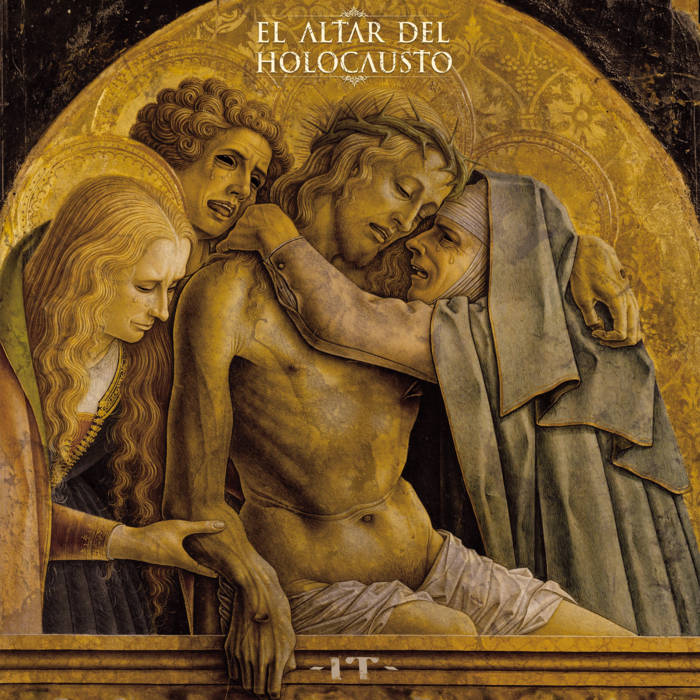 When catholic iconography, post-rock and doom go hand in hand

You probably don’t know it, but there has been recently a seismic event, of Richter magnitude 8.0, in underground doom/post-rock Spanish scene. Its cause: the emergence of a mysterious young band, as visually impressive as sonically amazing, named El Altar del Holocausto (translatable to “the altar of burnt offering”).The

band members remain anonymous, call themselves “brothers”, do not play concerts but homilies, name all their songs after Bible verses (even their name comes from Exodus 28:1) and appear on stage dressed as Holy Week penitents.

After two EPs and two fantastic LPs, first one dedicated to Jesus Christ and the second one to the Virgin Mary, the quartet from Salamanca uses the Holy Spirit as the leitmotiv for their third effort, named “-I T-”. If all this has not drawn your attention yet, wait and listen!

Most importantly than the whole conceptual, catholic thing is what kind of music El Altar provides us in their infinite mercy. Well, they play a sanctified blend of aggressive post-rock and elegant doom, almost completely instrumental. Contrary to what might appear taking their name into account, this Spanish band’s music is fine and delicate as resounding poetry. This does not mean its sound is soft or undemanding, since it is not. It simply fits in so smoothly and progressively that it immerses you in between their sonic waves without even noticing.

In order to avoid this review to be twice as long as it should, you will forgive me for shortening the names of the songs. “I · Because Evident is God’s Wrath…” establishes the basis of the sound in this album, with a more direct approach than before without losing melodic power in the meantime. As a proof that El Altar is not just another instrumental post-rock band Mogwai lookalike, “II · Love Your Enemies…” shines in the beautiful side of doom, not far from some voiceless and less gritty Pallbearer.

After that comes the one which probably is the finest moment and the ultimate highlight of the record. The mighty “III · Moses Stretched Out His Hand…” grows and grows in intensity until it bursts near the end in the style of their compatriots of Toundra. More surprises await for the believers who have made all their way until here, with “IV · I Have Seen His Ways…” mirroring best moments from another legendary post-rock band like Explosions in the Sky and featuring Spanish rapper Toteking in a surprising collaboration in the form of a speech. On the other hand, “V · From the Heart of Jesus…” truly stands out as one of the nicest pieces of “-I T-”, especially its astonishing growth and rupture from 2:00 on. Finally, the last track “VI · They Took Off His Clothes…” (their longest ever recorded) closes this record and at the same time the Holy Trinity trilogy, in the most epic way possible, chorus included.

In conclusion, El Altar proves wrong three prejudices of metal with their greatest record so far. First one: costumes and masks do not have to be used just to camouflage musical mediocrity. Second one: post-rock has yet ways to grow and expand beyond the narrow margins of the genre. And last but not least: not only doom metal does not have to include satanic references as an obligation, but it also can be luminous and even shine with the light of God.

Even though El Altar stands out as a conceptual, religious-themed band, there’s much more to the picture than meets the eye. However, it is undeniable that the shocking first impression they give it is the first point they score. By the time they are riffing their hearts out, the match will be already won.

Awesome, varied and low-priced merch, including this amazing album free to download, is available at their Bandcamp page.

III · Moses stretched out his hand over the sea, and the Lord, by means of a strong Eastern wind throughout the night, He caused the sea to retreat, and changed the sea into dry land. Thus the waters were divided.