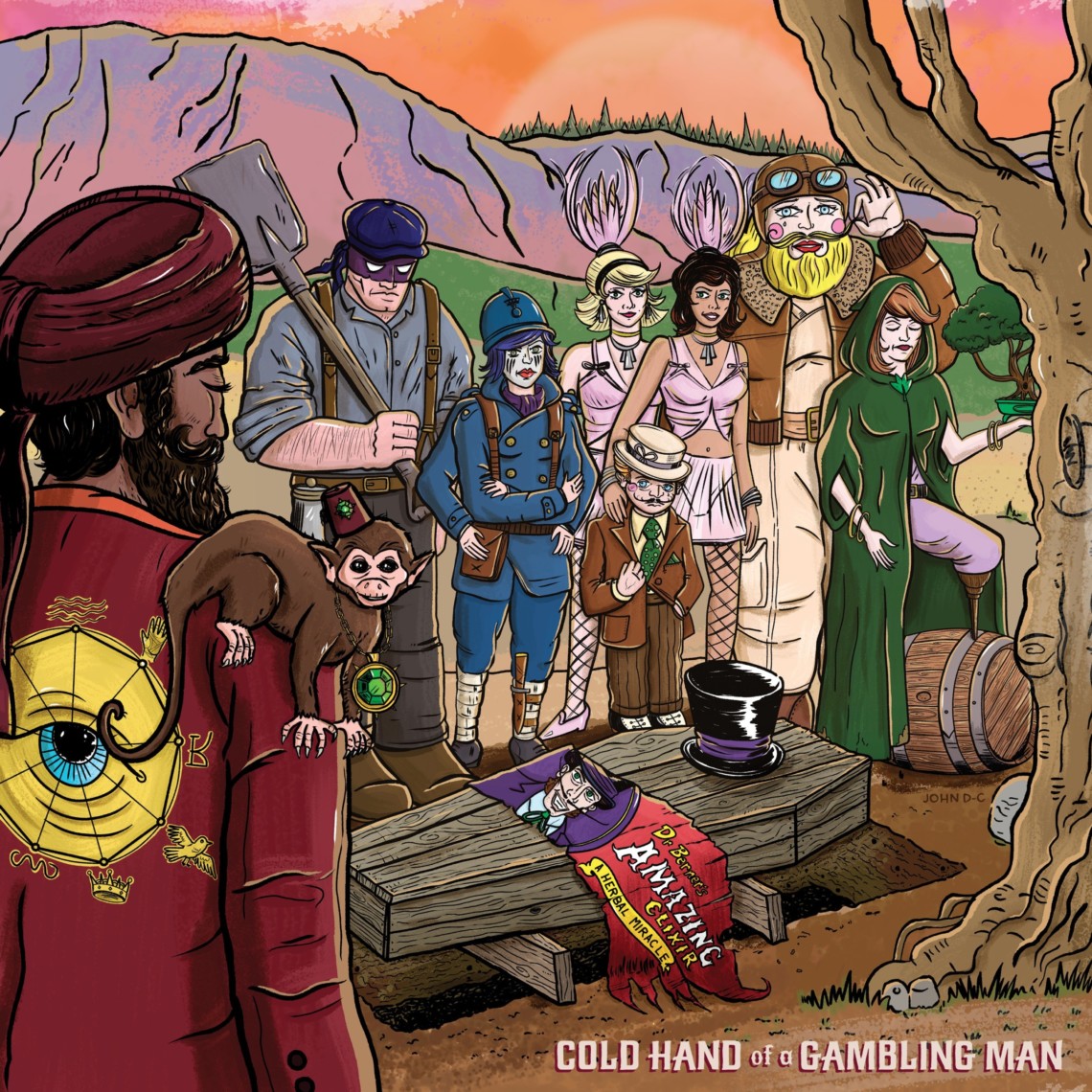 Follow the Aussies on their crazy jam trip through space and time...

I hope all of you are doing fine in those crazy days, staying safe, taking care of each other and enjoying that extra time to create and dig the wonderful fuzzy vibes that keep flowing from our favorite bands to our delighted ears.

I’m here today to talk to you about one of my favorite jam bands, coming from the other side of the globe, the mighty Frozen Planet … 1969 are about to release their new offering to the holy Fuzz. I fell in love with them on “Electric Smokehouse”, #2 of my 2017 top, and they kept filling my addiction to their wonderful groovy spaced-out jams ever since, with some new materials every 6 months or so.

So “Cold Hand of a Gambling Man” will be available digitally next week, on April 22nd, because of the current global situation, CDs will come on April 29th, and Black Vinyl and limited Gold/Crystal clear through Headspin Records on May 15th.

We’re hosting today the single premiere of this album : “900 Mile Head Rush“, that you can check below, while reading my review of this amazing record.

Given the cover, I assume this record is kind of a follow-up, not to their last record, but more to the concept-album that was “The Heavy Medicinal Grand Exposition”, from November 2018. The band’s 6th album was telling the story of an eccentric Medicine Man and grand showman, Doctor Berner, traveling around with his freak show and selling some kind of Herbal miracle remedy supposed to cure anything, and even evil!

Definitely something we could need in these dreadful times, if you ask me!

This time the 3 Aussies chose to cut the songs, with 3 interludes preceding each of the 3 main “acts” of the record, but they definitely didn’t change the recipe of their magical music remedy.

From the first second of the record, you will embark on an over-groovy and spacey jam trip, taking off steadily, before speeding up to hyperspace thrusts and slowing down as if to behold the crazy spots their inter-dimensional travels took them.

Frank Attard still rules as hard as ever behind his kit, setting up the pace for Lachlan Paine to start the bass engine on, impulsing the Frozen Planet…1969 ship course to let Paul Attard wander on and explore the universe on his six strings.

After the short intro, “900 Mile Head Rush” kicks right in, definitely sticking up to its name. Starting on fire in the first 30 seconds, the drums and bass already in full frenzy with the guitar heating up before unleashing the wild jamming, backed up by even more intensity from the rhythm section. Around halfway through the song, a noisy doomy breakdown seems to unsettle the engine for a bit, just to leave some space (pun intended) for a calmer second part, drifting away in the distance. Eventually pulsing back in the last part to suggest an endless trip fading out smoothly.

After a quick interlude, a nagging groove fades into the second jam, “A Mystic’s Interpretation“, almost 8 minutes long of dragging bass, up and down tempo drumming, reverberated extraterrestrial squeaks, taking their time before bringing it higher, faster, further. Another short break and the last part of this trip launches in a now familiar fury, “Transcending Verbal Concept” will take you on a grandiose expedition. The trio seems to follow the previous jam in its intentions and dare to venture even way beyond along those 21:33 heavenly minutes, leaving us wanting for more.

This is exactly why I love these guys’ music so much. They take us on twists and turns, exploiting every groove and noise to find new breaches through time and space to dive in.

It can take the form of frenetic Earthless-esque full-throtle jam, nagging Electric Moon heavy riffs, to echoing Pink Floydian distant melodies. But that’s definitely not limited to that, it just sorts of depicts the landscape their totally freely evolve in. They really explore everything in between, you can’t expect what will be coming at you. Even some weird alien transmissions intertwining brilliantly with the buzzing bass, recalling the legendary tone of the glorious 70s, and jazzy drumming that goes with it to resonate together and change shape and rhythm, eventually climaxing in a colorful supernova of groove and wonder.

With the record (or digital download) comes a booklet, including cuts of newspapers referring to the “Traveling Medicine and Curiosities show”, allowing us to know a bit more about the concepts behind those two albums.

That kind of material is always welcome when an instrumental band choses to tell a story, bringing elements to mind for the listener to picture the story a bit better, given the absence of lyrics that could tell the story. Which isn’t a bad thing at all, those clues and the music allowing us to make our own personal version of the story, transcending any kind of verbal concept (as the title of the last song suggests).