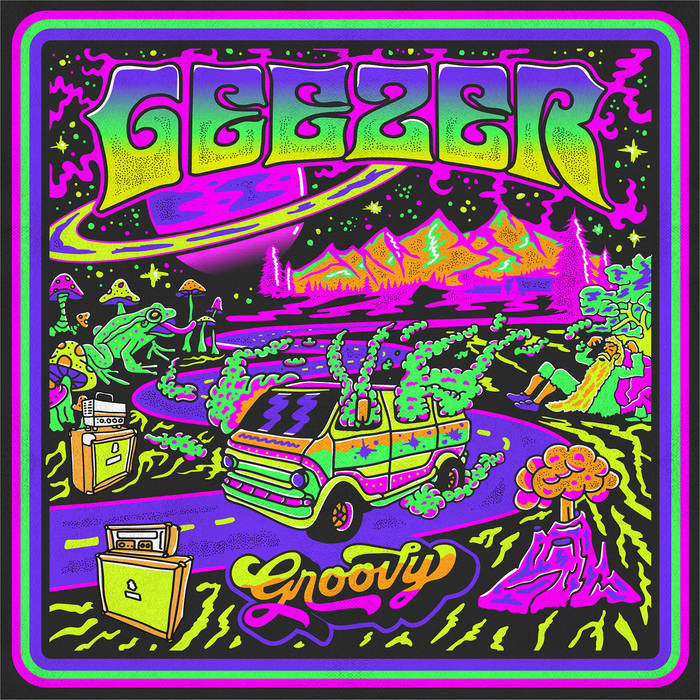 Are you ready to groove along the Geezer van?

I wasn’t very familiar with New Yorks own Geezer since I had only heard their last album Psychoriffadelia.
I guess it didn’t stick out that much to me back then in 2017 since I never checked out their past releases.
Now in 2020 they released their new album Groovy and I checked it out after I read an intriguing review of it by Dr Space of Øresund Space Collective.

Also Mr. Fuzz did his share because he as well said it was awesome and that I should check it out.
So of course I had to give em’ a new chance when those two dudes speaketh good about Groovy.

So lets take a seat in that funky lookin’ van for a roadtrip!

“Dig” sets the tone right from the start with 100% GROOVE! It gets my head moving, air guitaring to the bass lines and every time Pat sings “Can you dig it?” I think of Brant Bjork saying “Right on!“.

Then the pace goes down a bit for a while starting with Atlas Electra which at first doesn’t seem to go anywhere but halfway starts to shine with some jam vibes and great guitar work.

With Dead Soul Scroll we get some light psychedelicness and I imagine the Geezer van driving down Route 66 and a UFO hover along because of the sweet sounds, they offer the guys some spacegrass and the groove hits during Awake when they go further out there.

By now we gonna be ready for the super catchy titletrack, maybe I’m wrong but I get some classic rock vibes on this one and the keyboards might add to that, but the song absolutely rocks!

Drowning on Empty turns up the fuzziness and deliver some of the heaviest riffing on Groovy. The muting technique that Pat use on this one makes it stand out even more.

Now Slide Mountain comes in as the perfect break, a laidback instrumental piece made for times laying down in the grass and letting your mind drift away within the music.

The last half of Groovy really changed things up from song to song and this last one is no different.

Black Owl has the most of a “stoner” feel on the album and clocks in at over 9 minutes. It keeps your interest by changing things up between riffs straight from the book of Iommi and jam vibes with a psychedelic touch.