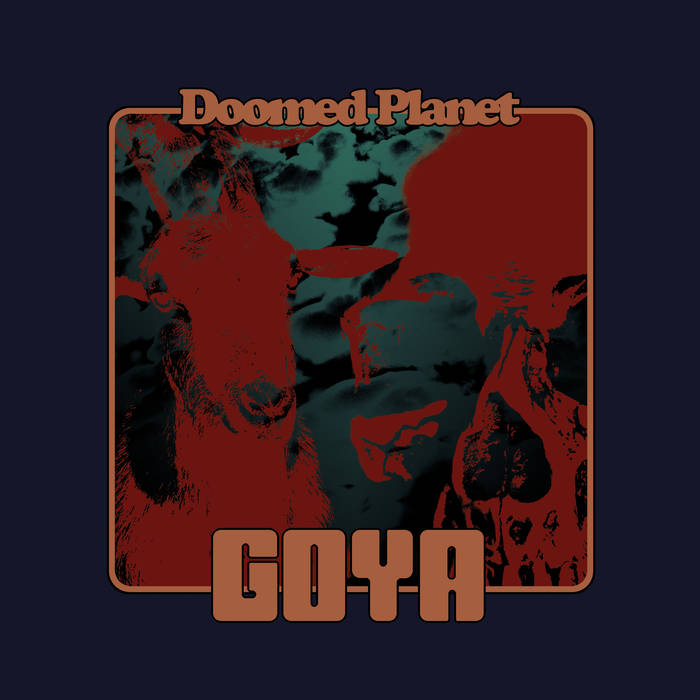 Goya seem to be unstoppable these days. They released an EP called The Enemy earlier this year (STB recently took care of the physical release), a compilation of early demos (through Totem Cat Records) in June, a 7” with Nirvana and Wipers covers to celebrate the 25th anniversary of Nevermind in September and now they are releasing a new EP for Halloween. But there is more! I didn’t mention the release of singles with exclusive B-sides (cover, demo, alt-version) from The Obelisk and Satan’s Fire throughout the year. And to top everything, they just finished recording their new album, Harvester of Bongloads, due early 2017 through their own label, Opoponax Records. Such a strong will to create is very impressive, but is it a good thing?

Given that this is Goya we are talking about, obviously the answer is yes. Doomed Planet opens this album and sets the tone: this EP is as doomy as it can be. It’s heavy, slow and depressing. The lyrics emphasise this feeling of doom as they express a very pessimistic and resigned view on the future of mankind. There is no fuzzy solo here, only pure riff-worshipping. You have no choice but sit and be crushed by the immense walls of sound that keep getting higher and higher as the track goes on.

The second track, “Hoof And Bone“, is the other nail in the coffin. It starts with a hazy guitar jam and a punishing rhythm section. There is absolutely no escape from our hellish fate, the human condition is a fucked up thing and Goya make sure we realise it. And if you still had any doubts, Jeff’s plaintive vocals brutally bury what little hope remained.

“Sorrow” is a short and dark instrumental track with an acoustic lead guitar, a fuzzy guitar and a bass playing a few notes here and there. It acts as a welcoming, although creepy as Hell, breather after twenty minutes of intense crushing riffs. To give a broad idea of what it sounds like, this is the kind of song that could be featured at the end of an old, bizarre horror movie in which everybody dies.

The title of the fourth track may ring a bell to some of you. Indeed, “Dogma” is a Marilyn Manson’s cover (from Portrait of an American Family). It looks like Goya are having fun recording unexpected covers these days! This track is a nice change of pace as the other ones are much slower, much doomier. While still retaining the same vibe as the original, Goya play it the only way they know: mean and dirty. And I have to admit that the sludgy tones suit this song very well, it almost sounds like they wrote it themselves.

I like how all their releases have their own vibe: you may want to listen to their early stuff when you just hate yourself and everyone surrounding you, while songs from The Obelisk channel your inner psychopath. Doomed Planet and  Hoof And Bone do no look at humankind and society with hate, but with resignation. It is very depressing but still very enjoyable as the songwriting is top-notch. Besides,  there is no denying that sometimes, it feels good to swallow yourself in self-pity, if only for a short time.

If you are a bit depressed or tired after a long day at work, lock yourself alone in a dark room and blast those tunes very loud. You will feel better by the end of the EP. It is a great way to unwind.