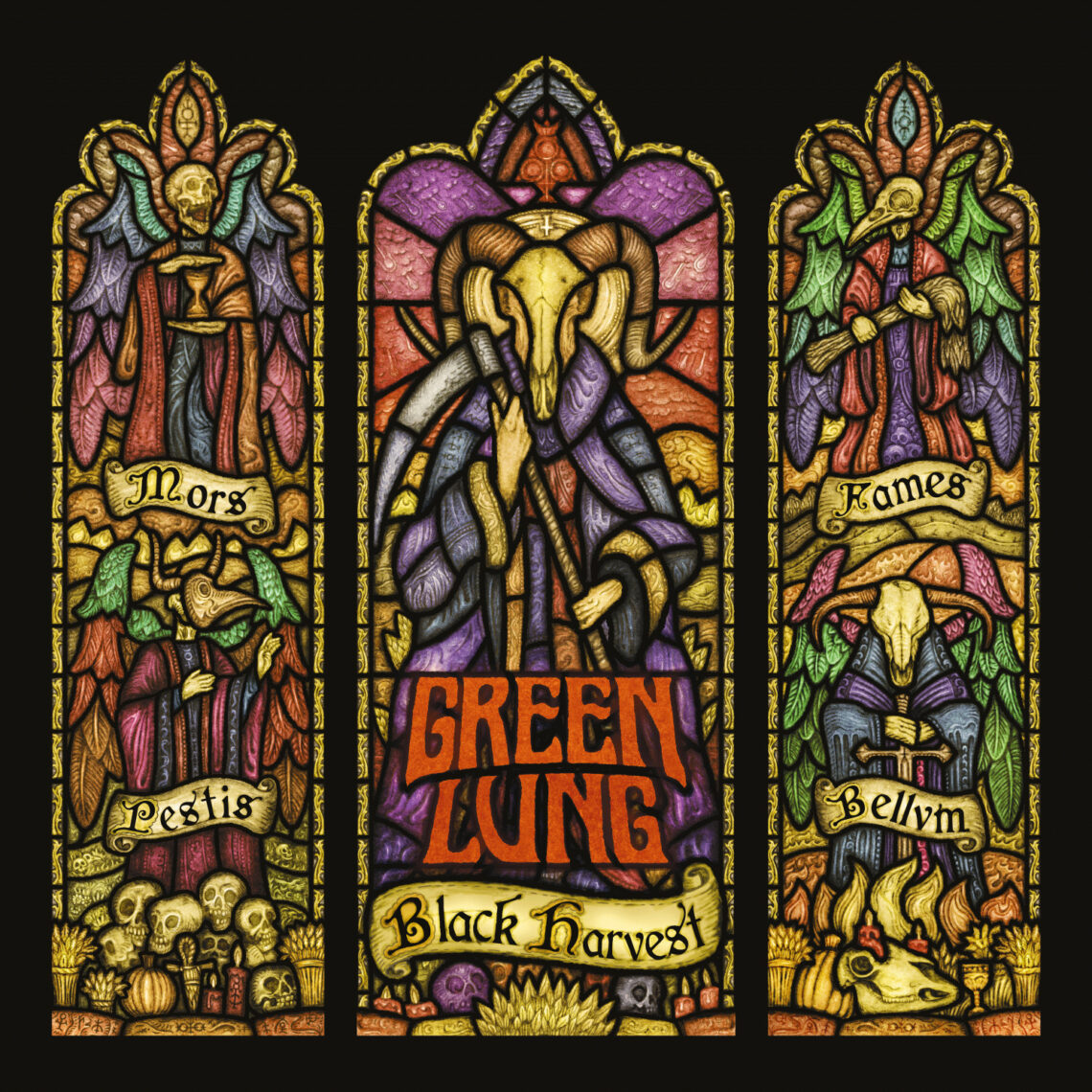 Pagan ceremony deep in the woodland

One thing that has always struck me in the heavy scene is the diversity of imaginaries from where bands draw their inspiration. Some take it from visions of the Orient, others from the American desert, science fiction books or horror movies for example.

Green Lung draws its inspiration from occult pagan rites. But not just a classic Sabbath interpretation of it. The music of London’s quintet refers to medieval witchcraft, diving deep into European woodland legends and mysticism. After their great first EP Free The Witch and their no less successful Woodland rites, Green Lung prepared for their new ritual: Black Harvest. A both cursed and brilliant occult stoner doom ceremony.

A mystical incantation opens “The Harrowing”. After one minute, it leaves room for a short but intense instrumental doom intro. Welcome to Green Lung’s cursed woodland, the pagan ceremony just began! The following track “Old Gods” begins right away with a loud and groovy riff and only London’s quintet holds the secret of it. Tom Templar’s voice enters and reminds us how catchy his singing is.

The first banger comes just after with “Leaders of the Blind”. After another crushing intro, a chug guitar riff that sounds more like vintage heavy metal adds some heaviness. A nice organ interlude lowers the pressure, before an explosive final chorus and the album’s first crazy solo. The intensity does not fade out with the manic “Reaper’s Scythe”. The intertwining of the guitar and the organ during the chorus is most enjoyable. The final section sounds darker with a sinister solo.

The eponymous track “Black Harvest” starts with an incredible pagan ballade that comes straight from a corrupted Sherwood Forest or The Witcher saga. A two-minutes instrumental blast follows. It is quite frustrating that the track is so short: I definitely want a whole heavy medieval folk album!

“Upon The Altar” comes back to a classic Green Lung stoner composition. It remains incredibly efficient and it is impressive how Scott Black’s guitar phrasing is natural, diversified, and groovy. The same corrosive witch brew is cooked in the next track entitled “You Bear the Mark”.

On “Doomsayer”, the tempo is a bit slower and the whole music sounds heavier. The main riff really draws inspiration from their previous album. And the final is groovy as fuck! It reminds me of bands like Egypt or Wo Fat. “Born To A Dying World” is an alternation of aerial passages and heavy electrified sections. Black Harvest‘s conclusion is epic.

I do not think I am wrong if I say Black Harvest was one of the most awaited albums this year. The verdict is indisputable: Green Lung’s last album is a great piece of music. Combining occult medieval fantasy with super-rich and catchy stoner doom compositions, Black Harvest never disappoints. Damn, paganism sounds so good!

Fall is definitely the best season to walk in the forest while listening to Black Harvest. Maybe you can pick up some shrooms on your way…