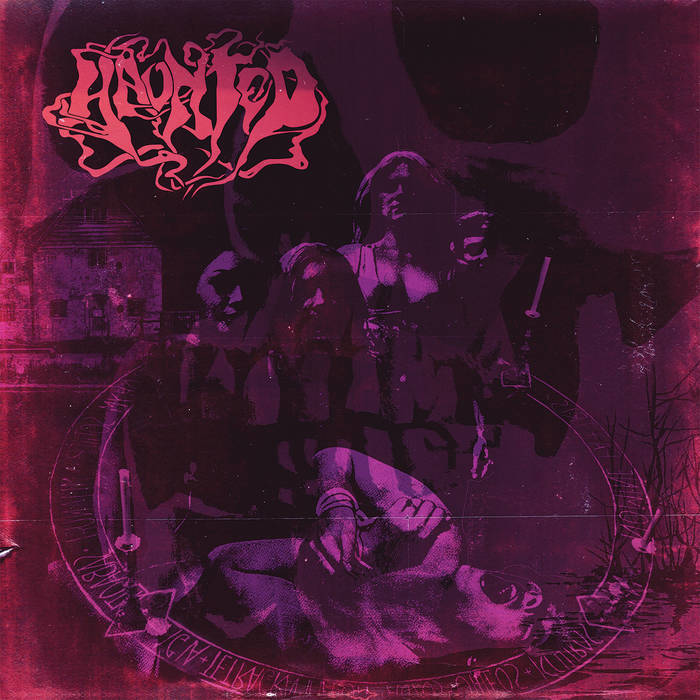 Haunted will provide your daily dose of occult Doom Metal!

Haunted is a band from Catania, Italy, formed in 2015 by Cristina Chimirri (vocals), Francesco Bauso (guitars), Francesco Orlando (guitars), Frank Tudisco (bass) and Valerio Cimino (drums). They released their self-titled debut album a couple of months ago thru Twin Earth Records, gaining the attention and praises from the heavy underground bloggers and fans (i.e. their album positioned #5 in September’s edition of Doom Charts).

Like many of their fellow Italian Doom Metal acts, Haunted plays slow and dark tunes, musically inspired by Black Sabbath and Italian underground legend Paul Chain. Their lyrics are influenced by the imaginary associated with occultism and witchcraft. Beside their musical influences, they’re in big debt with the aesthetic of classic Italian horror movies.

The album starts with “Nightbreed”, a song that sets the tone for the next 43 minutes:  almost 9 minutes of dark, down-tuned and slow riffs accompanied by ethereal and enigmatic singing. “Watchtower”  hits you in the chest since the beginning, thanks to the somber pulse created by the distorted bass and the hard hitting drums. The song evolves with repetitive patterns, kinda like the ones used by indigenous tribes to fall in trance in their rites, and on top of that you’ve guitars howling incredible solos.

The journey continues with “Silvercomb”. The song starts with some sludgy feedback and fuzzy distorted guitars and bass. After the clock hits the 1:17 mark, Cristina enters howling the words “Keening…”reinforcing the somber atmosphere of the previous songs. After the first time you listen to it, the song sticks inside your head, a good indicator of why the band chooses it as the first single of the album.

This debut comes to an end with “Slowthorn” and “Haunted”. These two songs include the trademark sound the band has presented in previous tracks: down-tuned sound, repetitive and hypnotic riffs, groovy bass and ethereal vocals. But, a major difference from previous tracks, highlighting and giving them extra punch is the sound of the snare drum: very chunky, fat and powerful.

If you’re a fan of Doom Metal, particularly the one that’s somber with references to witchcraft and the occult, I think this album will be appealing to you. In the end, the guys and gal have present to the heavy underground community, one of the best releases of the year, so you better check it out!

The upcoming vinyl looks beautiful. It will be released by the end of October thru Twin Earth Records.