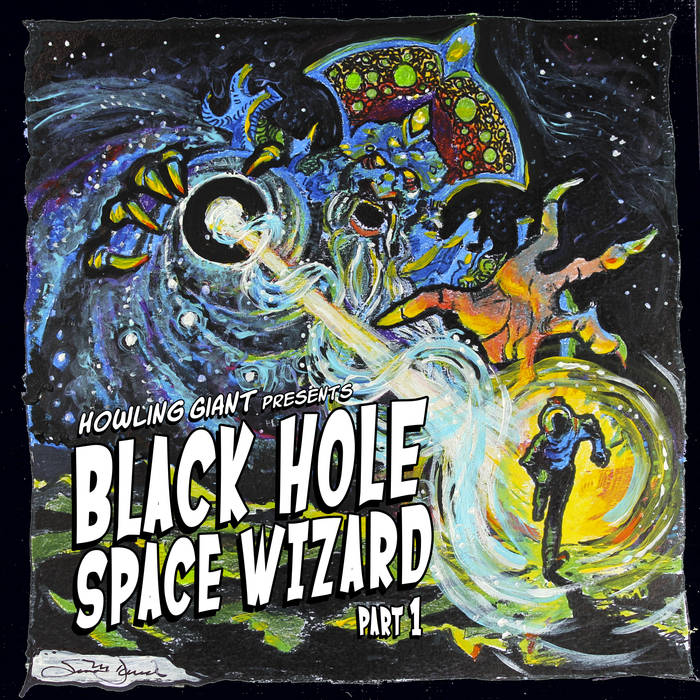 Behold or beware the might that lies within Howling Giant's latest release !

Howling Giant is a 3-piece stoner rock/metal band from Tennessee who have recently dropped a wonderful album called “Black Hole Space Wizard Part 1″. Just as the band has said themselves, the name Howling Giant is relevant to the music they create. The name Howling Giant immediately makes me picture a gigantic warrior/monster/mutant/creature of some sort that stomps around with a club. The music is equally as loud and stomps around your eardrums just the same as the fictitious giant does.

Black Hole Space Wizard Part 1 is a very short release with only 4 tracks, but don’t let that sound disappointing. The energized, yet laid-back vibe on this album is exactly why it is called Black Hole Space Wizard Part 1. While there is no set order or flow of the song order, the album does have an interesting flow to it. The first track, “Mothership,” opens the skies with trippy melodies and fuzzed riffs to reveal the black hole space wizard. “Mothership” is a great song to open an album like this because it has a little bit of everything balled into one killer song: the riffs, stoned vocals, energy, and psychedelia.

While the wizard is revealed, you are greeted warmly and gently with the following track “Exodus Earth.” This track is more laid-back than “Mothership” and has more of a drone to it, and not in the boring sense. It’s almost as if “Exodus Earth” was giving you time to adjust to the presence of the black hole space wizard so you wouldn’t be overwhelmed by everything. There is a greater emphasis on rhythm and otherworldly effects behind the main riffs, further validating that you are definitely before the mighty black hole space wizard. There is a really calm, but powerful solo that howls (pun intended) away next to pummeling drums. The solo does not overstay its welcome and makes haste after the high notes were hit, leaving a lasting impact.

After you settled and got used to the mellow vibes floating around, the overwhelming magic and greatness of the wizard are thrust into your face on “Dirtmouth.” It’s is the fastest and heaviest track on Black Hole Space Wizard Part 1 and wakes you up from the hysteria the first two tracks put you in. This is why I called Howling Giant stoner rock/metal; “Dirtmouth” pushes the stoner rock boundaries quite a bit more than the rest of the album and has a bit more aggression than usual. Perhaps this is foreshadowing what will unfold when the black hole space wizard loses his temper. The fuzzy bass and fast drums only add to the somehow clean mess that is “Dirtmouth.”

Bringing the album to an appropriate close is “Clouds of Smoke.” This track is just like “Mothership” but more in the style of doom. Just as the title suggests, the majority of “Clouds of Smoke” sounds like you and the mighty wizard are vibing together with some good herb or he trapped you up there with him, depending on how you want to interpret the lyrics. The vocals return to the stoned style from before and everything is back to the original psychedelia. Chords ring out over thick cymbals and lingering organ notes. Becoming one with your being are passionate leads that make you move with the music. This song and album end with a bit more of a kick to it than the earlier bits of the song, but you’ll have to listen to find out what I mean 😉

As a quick roundup, I’ll get more serious and say that Black Hole Space Wizard Part 1 is an album that took me by surprise by the way it progresses. I love the tones during the solos and the bass tone. It was all so appropriate and flowed so well. High quality production really added a lot to the sound with subtle rhythms and what not. The riffs were catchy and the vocals were tight each time.

When you want stoner rock, but don’t want to get too spaced out, but can still vibe with a mate