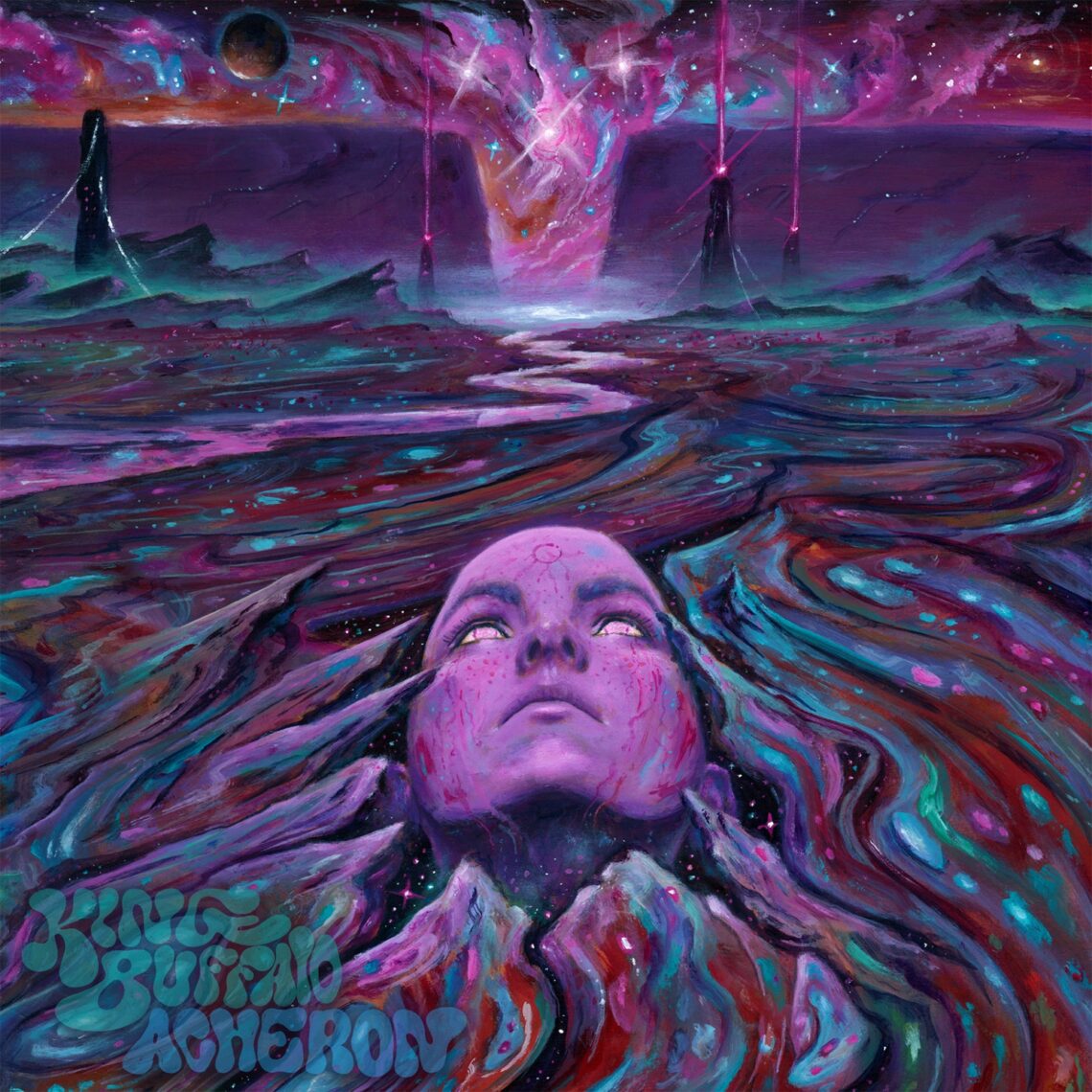 King Buffalo is one of those bands that keeps pouring their creativity over us, and that keeps on establishing their position as one of the main bands in the heavy psychedelia of our time. For the second time this year, they drop a killer album, the second of a trilogy they wrote during the pandemic.

The good thing with this trilogy is that they took the time to plan what they wanted to do, to give different meanings to those three albums that are getting released just a few months after each other. Even if written around the same time, and released in the same year, the atmosphere between The Burden of Restlessness and Acheron differs significantly. They also recorded them in different places, letting the place influence the album, by its aura, but also by its sounds. Acheron was recorded in a cave that features a subterranean river, and you can hear it, and feel it in the music too. Hence the name of the album actually, Acheron being a river in the Greek hell, it seems more than fitting here.

So behold this new opus by the New York trio, bringing us sounds from the Other Side, mesmerizing us with their flowing sonic saga.

As said above, the album includes sounds from the environment in which it was recorded, so the first thing that you’ll hear is that, some soft flowing water reverberating in the Howe Caverns. It’s a really fitting intro to this smooth and blissful album, quickly joined by a soft melody on the guitar before the other instruments kick in, giving it some time until the deep voice of Sean comes in, welcoming us back to King Buffalo’s emblematic sound. Mellow progressions based on an aerial sound, full of details meticulously assembled together, melting fuzzy heaviness, captivating melodies, and enchanting singing together to gently build tension and release it in soothing thrusts every now and then, as the New Yorkers have used us to, adding touches of freshness here and there to push their sonic universe forward.

If The Burden of Restlessness went a bit darker and colder away from the trio’s habits, Acheron brings us more back to what they’ve used us to before, reminding me a lot of the masterpiece that Longing to be the Mountain was. The music sounds more organic than ever, and somehow pretty warm for an underground watery setting, though I won’t complain as it goes more in what I love from them. That said, Acheron is not an umpteenth version of what King Buffalo offered before. You can still feel some gimmicks from their last album exuding here and there, some keys recalling Dead Star, and some other nuances here and there making this one a new step forward in the progression of such a consistent and abundantly creative band on their own sonic path refinement.

The transition between songs goes smoothly with the flowing water coming back as if it actually never left and still goes along in the background, covered by the music, but reappearing whenever it gets quiet enough, the cavern becoming part of the band for an album. Zephyr starts in known territory, contrasting between echoing trippiness and smooth groove, but slowly shifts into a more jam feeling. I guess that also explains the title of the track, as if the Zephyr was lifting up the music, making it fly and circle around under the cave’s ceiling. I can really picture the melodies reflecting on the walls, exploring the subterranean galleries, expanding in aerial echoes, and shrinking in heavy momentum, to fit the space offered by those underground rooms and corridors.

The Pink Floyd vibe is still as strong as usual, shining through here and there throughout the whole album. By now the New Yorkers have really digested it, made it their own, and know exactly how to use it, without overdoing it, or making it too obvious. As a big Pink Floyd fan, I must say it is especially pleasing to hear it regurgitated like that, reappropriated, reinterpreted, ever so brilliantly. Obviously, it is far from being the only influence at play here, but it is the most obvious, as in the very restrained first part of Shadows, with that dragging bassline, those captivating melodies full of delay, and this ethereal singing.

This song can be quite frustrating in a way, there is soooo much tension building up, and only a few short moments of deliverance. I am not complaining though, I enjoy it when bands play with our expectations and feelings like that, trying to trick you into thinking you know what will happen only to surprise you with an unexpected twist. I love everything they manage to express in this process, keeping you hooked while you hold your breath, waiting for more, while you may miss the point, as especially for this song, it is definitely not the destination that matters, but the clearly the journey. After all, it’s called Shadows, which is by definition what doesn’t stand in the light, and here, they spend almost ten minutes showing you all the different shades of shadows they can deliver. That said, it is not boring at all, the few fuzzy outbursts here and there are timed perfectly to keep your attention and relieve you from all the tension built. What an emotional trip…

Cerberus kicks off with a new color to their sound, as a kind of more hopeful vibe shining through the numbing fog, though it will quickly get overwhelmed by some mean riffage and aggressive distorted melodies, along with an almost menacing bassline. The guitar takes some trippy swirls out of the storm here and there but seems doomed to return to the grim crushing groove that makes the spine of this closing track. I might not have talked so much about it yet, but the drumming is especially amazing all over the album, super tight, full of contrasts and polyrhythms without ever being too technical. Scott walks a thin line behind his kit, between emotion and complexity, never conceding any ground to one or the other, actually managing to make them work together for an astonishing result!

With four tracks clocking around 10min each, King Buffalo took the time to develop the concept of each song, leaving enough room for their sonic alchemy to trigger that special spark they have the secret of. And in my opinion, it sparked so many times along the course of this mind-blowing record, sometimes through the sheer beauty of contemplative passages, others with a big fuzzy explosion, the trio always finding a way to make this special orgasmic magic happen. King Buffalo keeps on pushing their sonic universe forward, depicting it as a great surrealist painter, one touch at a time, always refining an already stunning discography.

Relaxing, in a cave / near a river / in your bath, losing track of time, letting yourself trip away into the night.