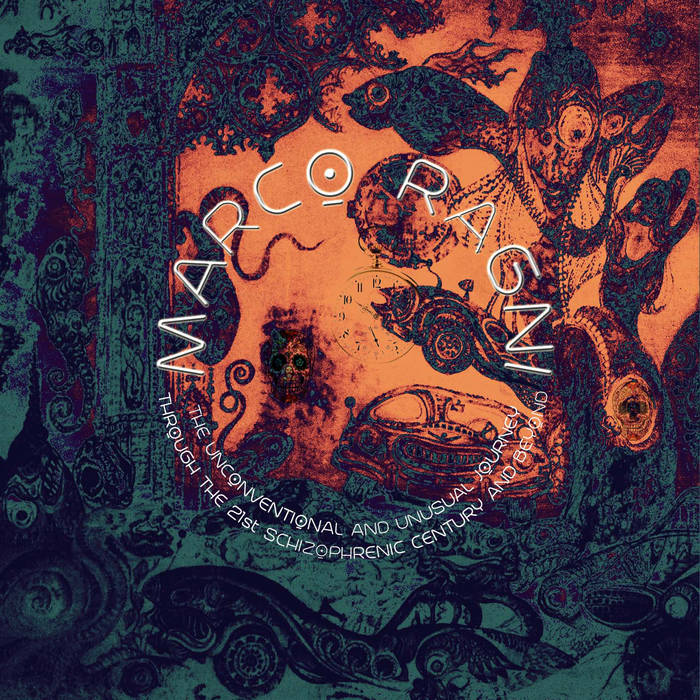 The Other Side of the Spectrum - Psychedelic Progressive Rock

Marco Ragni, a solo artist from Rome, has been around for almost three decades producing music with several bands, but officially started his solo career in 2009. Since then, he already put out 8 solo albums all containing skillfully crafted psychedelic progressive rock tracks. Inspired by the hippie scene and the late sixties since he was 17, almost 20 years later he still manages to create the sound so many bands were after during that era. The master have had help from many talented musicians during his musical journey, creating one of his latest tracks with vocalist Durga McBroom from Pink Floyd.

Before even listening to this album, the sound is already partly revealed with the mysterious album title, song titles and cover artwork. The Unconventional and Unusual Journey Through the 21st Schizophrenic Century and Beyond. An album title that stands on its own. The album starts with a message, ‘Take a trip man, there’s a huge world outside’, and introduces the listener to a large range of different sounds, effects and instruments. Echoing voices, rapidly changing sounds, droning noises, a vintage recording of a man rambling on, even sitars and oriental percussion are heard. It all sounds vaguely familiar, but we haven’t heard this in a while. It takes us back to the early Pink Floyd recordings, when the technology was still fresh and created a new way to experiment with sounds. Marco Ragni has the guts to reintroduce the experimenting with different sounds and noises and combines it with a wide range of different styles and instruments.

In his second track, Marco Ragni shows he has more musical tricks up his sleeve than creating disorienting sound effects. A jazzy track, with piano chords as it’s foundation and an electric guitar and saxophone lead. In just two songs, Marco Ragni has shown the skill to use A LOT of instruments. But he doesn’t stop there. The song, ‘Watching the other side, a magical light’ introduces us to Marco Ragni’s unexpected vocal capabilities, as well as his skill to produce an epic electric guitar solo which fits in the picture with modern day jam-rock bands like Earthless and Radio Moscow. Layered acoustic tracks lay the perfect foundation for this epic soloing and continue through the 7 minute long track. His vocals can be heard shortly but get more attention in the next song. ‘A Voice Inside?’ presents us with a more modern sound and although acoustic, the song has a stoner rock groove to it, with hints of country. He shows he isn’t some random hippie who is longing to live the golden years of the 60’s again, but also knows how to use his skills and influences to create a modern Rock track.

With an album that uses more musical genre’s than songs to use them in, Marco Ragni successfully created a very diverse and original album, with influences ranging from vintage progressive, to modern psychedelic-, stoner-, and jam-rock. It almost seems like an unconventional and unusual journey through, and beyond, the genres that brought us the music we have today, in this 21st schizophrenic century. At least, that’s one interpretation.

Just think of the most late 60’s, hippie inspired activity you can think of. Take acid, drive a van, with your barefooted friends in the back, passing a joint on a bohemian rug. Something like that.

I’d very much like to hear the story behind that album title and song titles. The Unconventional and Unusual Journey Through the 21st Schizophrenic Century and Beyond. Beautiful.

Watching the other side, a mystical light