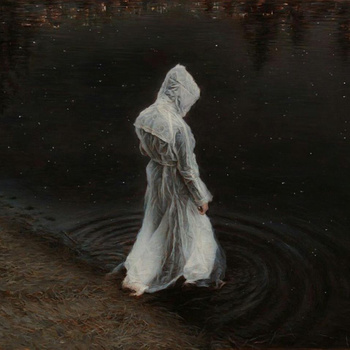 It came to the final point? How can you make it heavier? You know, it came to the point that they have to make the second record. Like Pearl Jam, Wolfmother, The Vines, Tokyo Dragons, and lots I forgave, the second album is always hard to make when you make an epic debut album like they did…

They knew it, they said it, challenge accepted!

Monolord is all about the riff. The headband, the groove. and it always will be. Monolord is reinventing the art of crushing, the hammer and the iron. Always trusting their guts, always keeping the way.

They found a new way to make it heavier than ever.

Vænir is a complete evolution, after a big tribute to the first album with Cursing the one you can definitely hear that the energy, the will and the strength of Monolord are here to stay! “We Will Burn” is the introduction to the new level that Monolord wants to reach. The hammer will speak for itself. The new way of smashing. The new rhythm of death. Eternal riverbed is flowing into the air. The recipe is settled, and the variation is infinite! They all stop and you keep on going! Start again and never ends!

The heaviness got a change. They took risks. Even though the first two songs got you comfortable, this is Monolord, still, it is time to speed up things. Things are moving, things are changing and Mika is taking control. The journey has begun but you didn’t notice. Monolord has evolved. Every each of them has become bigger. Hazy vocals still leading the way! Each member is settling their way on playing, listening to “We Will Burn” caught my attention right away, the bass is definitely here. Approaching the space in a different form, adding groove and reliefs to the vocal parts! Esben, the drummer also kept his signature, heavy breaks, which sounds like he is playing with two hammers, and his bell is always here to remind you that you’re still not in the deepest place we can reach! The last and ultime riff of “We Will Burn” is something you should experiment live, Monolord is once again trying new things and exploring the depth of the sound they’ve been creating. And THIS IS GREAT!

We should all consider moving to Sweden

As Graveyard before, Monolord’s first album gave them the key to notoriety and a chance to be heard by a certain amount of people. A chance for them to deliver a strong message to a larger audience for their second album is a thing that they couldn’t miss! More than a heavy doom band, Monolord is here to shake your mind and to try to make a change! Am I cursing the sun? Am I cursing the one? Nuclear death, exploding the sun! Monolord is back to warn you! Their strong will to make things change is creating amazing open-eyed songs! My only regret can be that sometimes the vocals effect are so strongly put that lyrics are hardly understandable for my weak little brain, but it will make you even more concentrate on the vocals! I deeply think that their message is urgent and I totally support their actions to get people aware about those things such as global warning! I’m also deeply impressed that a band like them are using their songs to be part of the change, are they trying to insert an idea into your brain too? Monolord is here to open your eyes. It is just that I wish their message could be clearer to hear, even though I really love their vocal effects that define, embrace what Monolord is and will always be! My point is to tell you that I strongly think some bands can get stuck with a signature, is a Monolord song without vocals effects can still be a Monolord song? I think so.

I’m saying this, not because I just want to say a “negative” thing about them, but just to prove to you that they are real! I’m saying it because I strongly think that Thomas has a great voice! The Cosmic Silence, their Planet Caravan, their Longing (Graveyard fans will know) is a great piece of work! Here, despite the fact that there’re still effects on his voice, you can truly enjoy his words, floating and fading away in space. I clearly heard a type of sound I’ve already heard before, something tell me that there is a Swedish sound that is slowly starting to be recognizable, maybe not a Swedish Sound but a Swedish Spirit let’s say! Hearing this sound is like discovering a new part of Monolord! Does the dark side of the moon can be brighter? Looks like it is! A short interlude with a great impact on their record!

Monolord are exposing themselves to you, providing you emotions, new tones to expand. Those tones that you can find in their last and self-titled track “Vænir” ! One of the slowest song they came up with! A doom ballad for you my friend. As we talked about it previously, The last track is always important, what is the final word, the final act you want to give to your listeners? Monolord also decided to make it count, to make it truthful and clear! Lyrically speaking more inspired by their debut album, you are now witnessing one of the first guitar solo of Monolord (with Nuclear Death too), another fact that is highlighting my main point, Monolord is evolving, the beast is growing and is taking more confidence about what it is, and what it could become!

Enter the depth of Vænir

So you should all do the same, enter the depth of Vænir, swim in that cold water that is refreshing your body as much as your soul! Keep your head above the water or sink all your body in it for full experience, you’ll find what is the most convenient for you! Vænir is a great record, put out from engaged friends who wanted what is best for the band and for you! Monolord is taking the doom where it has never been, mixing heavier-than-ever riffs with great vocals and an atmosphere which is the most important part for a legendary album that it is. Vænir is setting the strong basics of what Monolord is starting to become! A furious band! Monolord didn’t stick to Monolord. They managed to compose great tracks, adding more reliefs and contrasts that let you feel the crush of it, becoming even heavier! Vænir is a great second album, an album of experimentation and evolution which is showing you how far can Monolord go and take you! You are not done with them, it’s sure. Worship the riffs and open your eyes to the fact that Monolord is changing things in the music scene. Using their fresh notoriety to have a true chance to lead a message, lead a new way of thinking and a new way of approaching music. So to everybody who thought that Monolord would have got stuck in their sound, you were all wrong! Keeping the spirit of it and sending it in every direction it can afford! Monolord is, with Vænir, showing you the infinite possibility that they can play, sticking to the sound of Monolord, how it grabbed us all in the first place, improving it and still experimenting other things, this album is live and real!

They managed to make an epic second album that settled their strong place within the best doom band of the planet. They invented their sound, what defines Monolord, showing you that you can (still) be very creative playing doom and there’re lots of paths still left to take! I deeply think that their third album will be the incarnation of their changes, it will be as pure as Vænir, but will definitely materialize their evolution, it will be the final step of it for them to take off! But be patient my friend, you can first savor Væenir with all that is offering, a great experience, a dive into their world, their mind and their cold black abyss! Don’t miss a chance to see those guys live, it is heavier than the record, as crazy as it sounds! Those guys are fighting for it, spreading the fuzz wherever they can!

Monolord personify the future of what doom could be, this is now, the future is now and they have decided that they can do something about it! Raise your awareness for a right cause!

So join the troup now!
Monolord wants you!