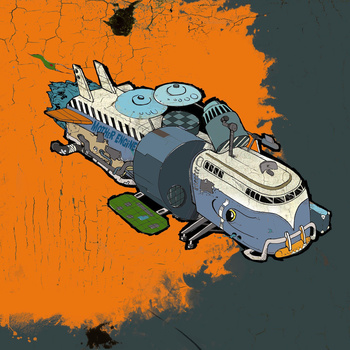 Spacey Trip with the "Muttermaschine" !

Hello Fuzzers, hope you’re all feeling good, in a mood for one of my favorite Heavy Psych Jam band, yep I said it ! And guess where they come from ? Germany again ! Yeah again, because last week I reviewed the Colour Hazesque Wiredmind also from Deutschland, if you missed them keep it safe somewhere, or listen to it right after Mother Engine, today’s mindblowing band 🙂

I bought their vinyl in April because it’s such a wonderful album in every points :

So yeah without even talking about the music for now, look at that artwork ! It gives you the appetite to put it on your turntable right away, and stare at it while listening to those never-ending instrumental jams…

“Exoplanet” directly puts you in a spacey-mode, I hope you found a comfortable position because you’ll be taken next to a red giant star very soon… Slowly taking you from a sweet and groovy riff, until the fuzz kicks in along with some awesome drums ! The riff at the end of the song is soooo gooood, just what you need to wake you up from your cosmic dream 😀

I won’t embark into a song-by-song review, and instead let you embark into that “Muttermaschine” and enjoy a long journey of 50 minutes of the most delicious instrumental psychedelic jams you ever heard ! What I also appreciate very much with Mother Engine is they also have some parts that are high on the Temperature Level and Fat Level, exploring the whole range of that heavy-trippy type of sound we love so much 😉

PS : They also did a killer gig in the Stoned From Underground camping in 2013 ! How cool is that to bring your gear in the camping 😀 Here is the full concert on YouTube !

Why is this band worth listening ?

In what situation you should listen to this band ?

We should ask the band to organize a trip with their “Muttermaschine”, them jamming while you’re looking at the planets by the windows…