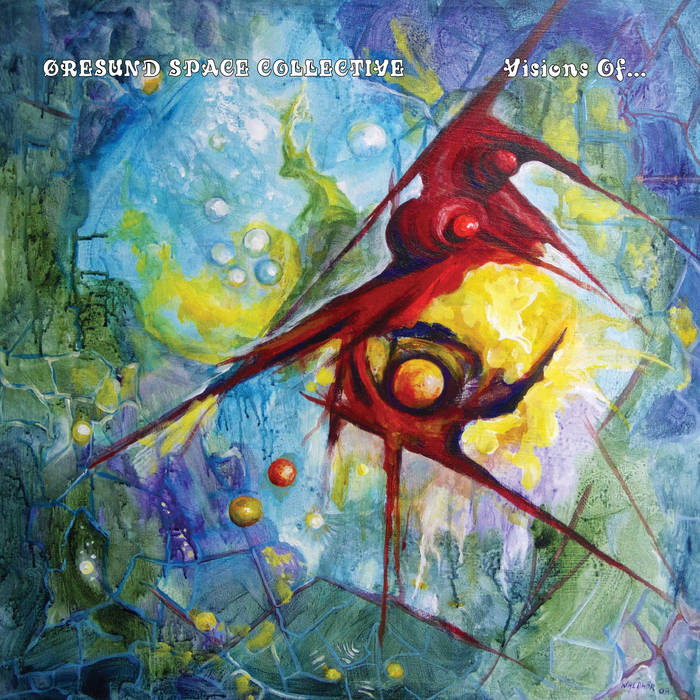 Øresund Space Collective is, like the name says, an ever-changing collective of musicians. They are the number one improvisational jam band I can think of and since their creation in 2004 they’ve put out a huge amount great records. Every record has his own line-up and sound, but it all rotates around Psychedelic Space Rock. Their newest release, Visions of … isn’t an exception, recorded as a live improv session at Black Tornado Studio. Sit back and engulf yourself in this 80-minute long trip, it’s going to be a strange one.

With Visions of …, ØSC takes a jazzier, funkier shot at Psychedelic rock and takes us back to the early 70’s jazz fusion sound from bands like Billy Cobham and Soft Machine, which is best to be heard in the second song, ‘Above the Corner’. With a funky bassline that sounds all too familiar to Cobham’s hit from ’73, ‘Stratus‘, the fusionesque influence can’t be ignored anymore. But before we even get to this track, we have to find our way through the 42-minute long title ‘jam’ of the record.

Where even to begin to describe this track? It’s 42 minutes of fully improvised riffs, solo’s, bass lines and sound effects. All the different parts and instruments intertwine and merge together, just to take their own turn again and go with the natural flow of the jam. The dynamics in the track allow the listener to casually go with the flow or focus on every single twist and turn it takes, without getting bored for a single second out of all the 2.532 it includes.

‘Piece of Seven’ is built around a steady, heavily grooving drumbeat with psyched out sound effects swirling and circling around it. The song has an oriental sound to it which makes it again, different to its predecessors. The 4-song album finishes off with ‘Around the Corner’, the second part of a jam that started with ‘Above the Corner’ but has an entirely different sound than the previous part. A more straight-up Psychedelic rock track, with a fast-paced built up, a funky rhythm guitar and a soloing guitar that takes the lead. Nothing very original and a bit less interesting than the rest of the tracks, but I suppose you got to come down to earth again at some point.

Although this album will definitely take your mind places you’ve never been without any illicit enhancements, high as a kite would is probably enjoyable too.

Just go and listen to it already!