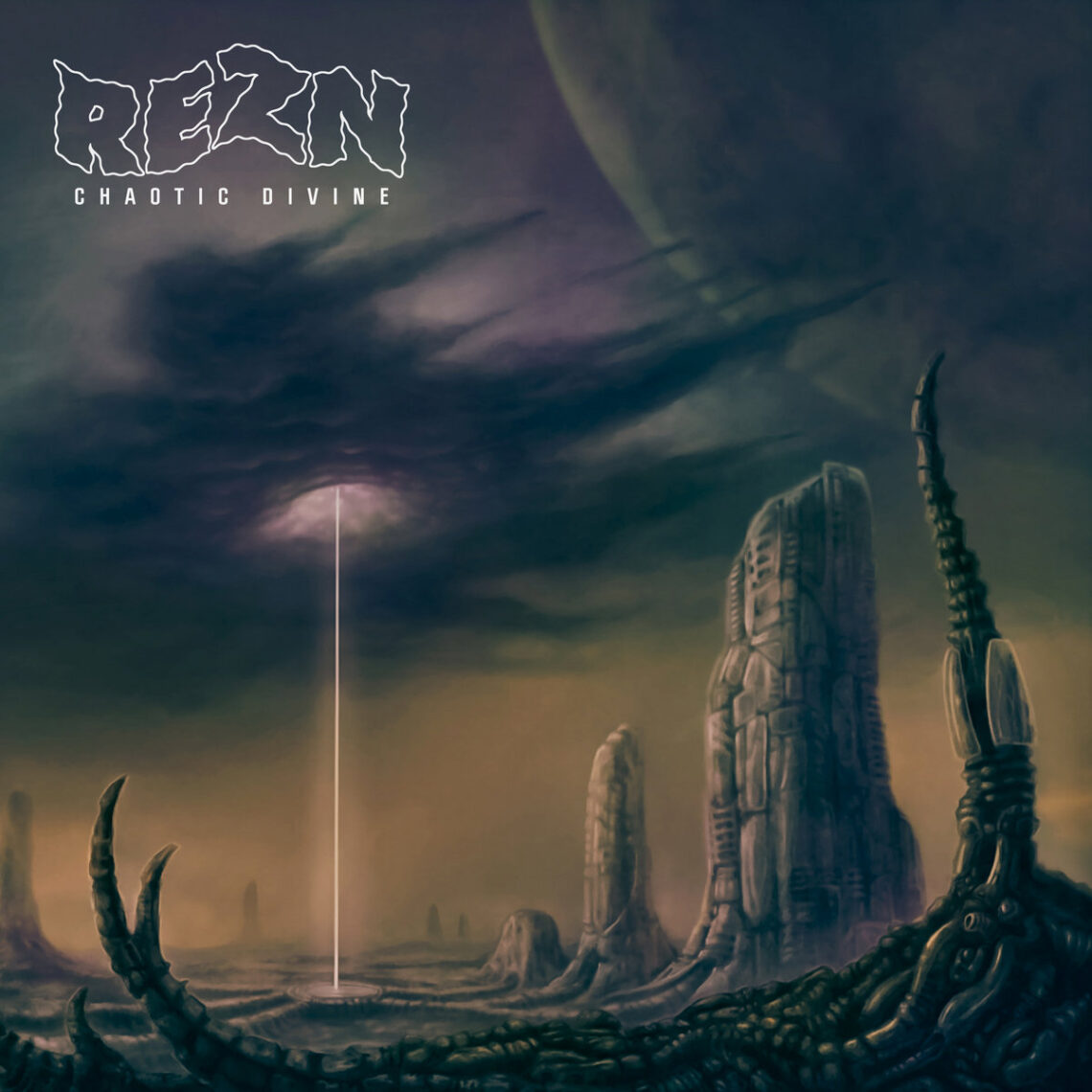 Open the gates of the abyssal void.

Two years after the excellent “Calm Black Water”, REZN is back with their third LP entitled “Chaotic Divine”.  A very high-quality stoner-doom album and a deep dive into the abyssal but flourishing universe of Chicago’s quatuor.

Let’s be clear: REZN is far from an unknown figure in the microcosm of the heavy music. Actually, they already have emerged as an influential and popular band of the scene, especially with their second LP Calm Black Water, released in 2018. Chicago’s quatuor impresses with their capacity to deliver some solid psychedelic stoner-doom while crafting singular musical universes. And what makes them special is that they always manage to enrich these universes. They have this great ability to precise their sound signature, to develop it without losing their primal identity.

Since Calm Black Water, the band has come a long way. Their ultimate long production, Chaotic Divine vouches for this progression. It still offers this so particular and efficient psychedelic stoner-doom. They also take advantage of their successful experiences to push their sacred quest one step further. Chaotic Divine displays a larger range of sonorities and musical approaches. The result is a 64-minutes cosmic doom odyssey that takes place in a haunted galaxy. A journey throughout a distorted space, bathed in a fuddled but captivating psychedelia. Let’s be clear again: you won’t resist its attraction force.

“Emerging” opens with soft sitar notes. After one minute, comes an electrified doom riff, quickly backed by a punitive drum work and the recognizable singing of Rob McWilliams. It is easy to enter the sound as the first part of the song clearly reuses the ingredients that made the band’s reputation. The second part is much more contemplative and introduces the listener to the post-rock approach that can be found throughout the album.

The second track “Waves of Sand” starts in a psychedelic and clear melody guitar that reminds of Naxatras space rock way of composing. Then arrives the sax for the first time. Alongside with the round bass and drums, Chicago’s quatuor builds up instrumental sections full of echoes and sonorous modulations. The heart of the track is a jamming section which leaves more liberty to the sax. All this construction blows up in another phase, much more epic, with a heavier riff-oriented and rhythm section. The conclusion is way calmer. The music teems with awkward noises as if the environment they depict were inhabited.

This last ambient section makes the transition with the following “Garden Green”. This one is also built on a contemplative heavy psych approach. Guitar is clear, modulation effects shape the atmosphere with a deep bass. There is something aquatic in “Garden Green”, almost abyssal. The impression of depth is reinforced by the sax that sounds like the siren of a boat coming closer and closer. The music changes radically with the fourth track “The Doors Opens” and its crushing psych-doom riff. It is slower and heavier. Singing becomes dirtier and saturated. The middle section comes back to a calmer psych phase with the ethereal voice of the usual singer… before dropping again in a heavier section.

The next track “Clear I” is the first interlude of the album. This is a totally different track, a kind of experimental and more electronic cosmic doom. It works well regarding the narration of the album. It does not jeopardize the whole coherence. Quite the contrary, it is another proof of REZN creativity. The cosmic breath that concludes “Clear I” makes the transition with “Optic Echo”. Another great track that paints this both fascinating and disturbing space. Its particularity is the riff doubled by the sax, giving a special coloration to the heaviness. The composition is precise and the build-ups are perfectly managed.

“Mother / Forever Time” is the longest track of the album (more than 10 minutes). It is constructed on a dual conception of psychedelia. The first part is rooted in a classical heavy psych vibe. Sonorities are more folk, almost oriental from time to time and the progression looks like a shamanic initiation. The second part is more experimental and ambient. It displays a great work on frequencies and synth waves. Psychedelia is no longer organic but much more technologic, futuristic. “Inner Architecture” follows. Probably the easiest track to listen to. The chorus perfectly enhances the singing. Its stomping riff is super-efficient.

Then we reach the most aggressive part. “Scarab” is an upbeat track that heads to stoner-metal territory. The riff works as an interstellar steamroller. Modulation and distortion effects add depth and corrosion and give the impression of a maelstrom. The fury vanishes in the second interlude “Clear II”. Just as the first one, it depicts an awkward but flourishing space in which every detail can draw the attention. This cinematographic passage finally leaves room for the ultimate track “The Still Center”. It works as a condensate of what makes this album so rich and singular: the floating melodies, the round bass, the haunting sax, and this great capacity to make them progress in harmony with the infinite echoes of the astral void.

Chaotic Divine is an album full of maturity and mastery. It is easy to listen to and captivating at the same time. It constitutes the admirable witness of the coherent musical path REZN has followed since 2018 Calm Black Water. The Americans are in a perpetual movement, driven by a crazy creative force. We already look forward to their next productions. But before, we won’t forget to enjoy and enjoy again this fabulous Chaotic Divine.

Better with good headphones or speakers to enjoy the best of REZN flourishing music.

If you like Chaotic Divine, go and check out Infected Ambient Works, their synth-focused production, made with Chicago’s band Catechism.