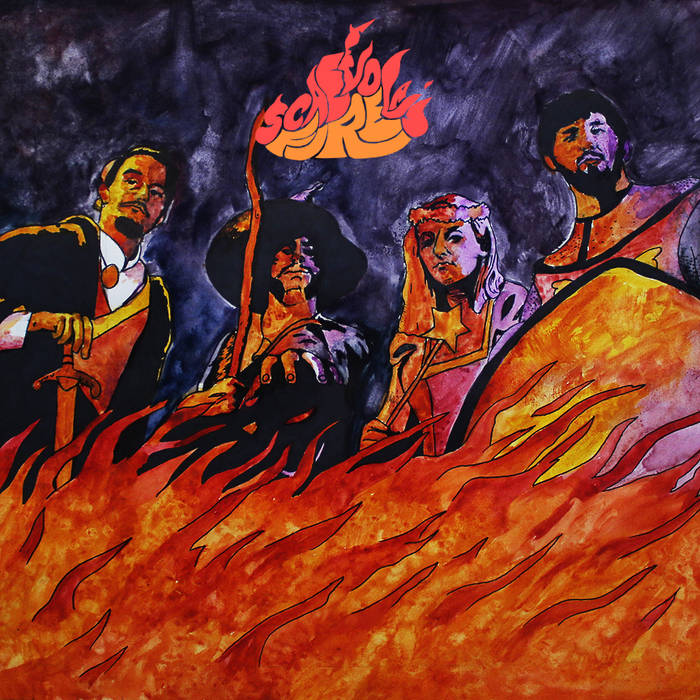 This week I bring you Scaevola’s Fire from the USA. They released their debut album little over a week ago, so it’s about as fresh as you can get! I already get the feeling they’ll be one to watch in the future so lets join a privileged few and be one of the first to check this out.

There’s a definite theme here; an ambiance, an atmosphere. It’s got a classic 60’s psychedelic/hard rock foundation pinning everything up, but then a surprisingly good selection of riffs and soft female vocals are what make this album stand out. It lulls you into the deepest of grooves with the production value really adding something; it’s as if everything (especially the guitars) has had the volume turned down ever so slightly. Now, had they come up with similar sounding riffs, many other bands may have gone the route of throwing distortion pedals and overdrives at it until they ran out of space on their pedal board. Scaevola’s Fire instead show restraint and control with the levels on everything – keeping Kasia Rybczyk’s soft and sultry vocals clear above all else. Thankfully though, instead of this stifling the rest of the music it moulds it into something far more unique and interesting.

One final note on the production, I love they way you hear the amps feedback in the background and how roomy the drums sound. It gives the songs a much more organic/live feel and is great to see now and again 🙂 especially with this type of music.

It’s pretty obvious they intended to create a certain mood and setting on their debut, on occasion going so far as to just straight up drop the…how shall I put it…excitable groans of a lady into the mix! (Sex noises. In case that wasn’t clear.) They’re only this blatant on the one song though – “The Wendigo Cries Within My Soul” – which also happens to be the only song to feature solely male vocals. It’s one of the best tracks on the album because of that oh so indulgent classic rock feel, with riffs as dirty as the tone is sexy.

For the rest of the album, Kasia takes over on lead vocals which push the sound to somewhere even more heavily influenced by the 60’s psychedelic pop and rock era. Their big catchy choruses would be cheesy if it weren’t for the fact that it all just sounds so haunting. Nowhere is this more prominent than on “Yellow“. Scaevola’s Fire capture that gothic/folklore/”Everyone grab a pitchfork ‘coz there be witches about” kind of vibe. It’s way too hard to pick a favourite song, but gun to my head I’d say “The Rebirth of Prometheus” for its punchy drum solo at the end (“Hand in the Fire” too, just for that groovy-ass riff that it revolves around!). A special shoutout needs to be made to guitarist Mike Teixeira for his awesome guitar solo’s that feature on pretty much every track. You’ll have to decide for yourself which on is the best because I sure can’t!

There is an intro and outro skit too, designed to guide you to and from the ‘Gates of Tartarus‘, and I do like this type of thing on an album a lot but I feel like it needs to be longer here. The acoustic guitar is used nicely but at only 30 seconds long it’s not drawn out enough for you to get immersed in time for the first song.

Rest assured that you’ll be comfortably immersed by the second half of the album, because it’s so smooth and luxurious between the production and Kasia’s vocals it becomes more and more hypnotic. It’s a mysterious and alluding foray into all the best elements of psychedelic pop/rock, carried out with a retro doom feel. To find bands that can so wonderfully take a slant on an already well-established style and make it their own is a special treat.

I could imagine this making an awesome soundtrack to a Halloween party. For every other day of the year, headphones in during the evening.

It’s pronounced “Sky-Woah-La”. Kinda fun to say…not so fun to spell. Most importantly though: great to listen to 😉

The Rebirth of Prometheus