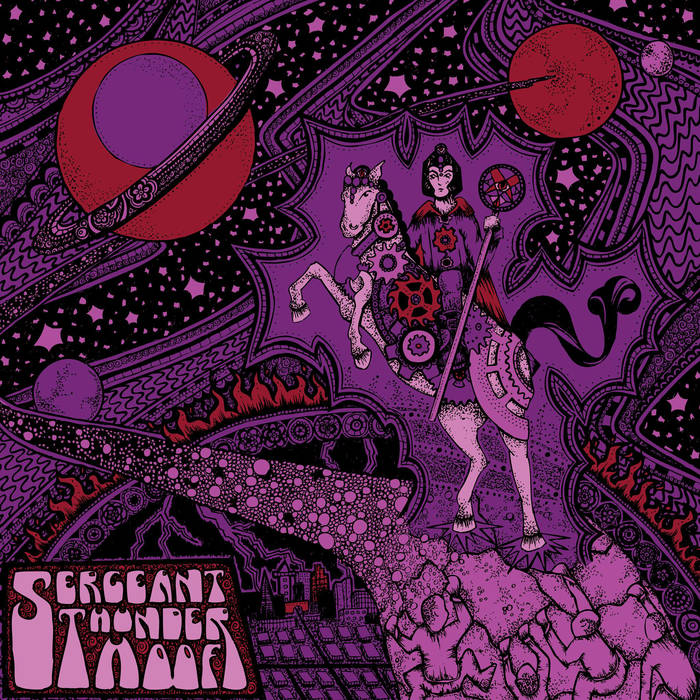 Powerful Psychedelic Jams That Take You On A Journey...

Somerset, England Stoner Rock group Sergeant Thunderhoof just came out with their second release “Ride of the Hoof“, and it is one of the coolest Stoner Rock sounds I’ve heard in awhile !

These guys know how to space out the sound while keeping it intense. If I had to name one thing that stands out in this album, it’s that Sergeant Thunderhoof is a sound that is powerful, but subdued. They bring a level of intensity to their spaced out, psychedelic jams that is unparalleled by most, and the depth of dynamics Sergeant Thunderhoof uses is a sign of skilled musicians that spend a lot of time perfecting their sound.

Sergeant Thunderhoof reminds me of a certain sound produced from the 90s – be it “Stoner Rock” or “Grunge” I’m not really sure, but it has a certain quality that reminds me distinctly of the toughness and depth of Soundgarden with stoner rock greats Monster Magnet. Huge guitars, explosive rhythms, pervasive bass, and dramatic melodies create a sound that carries you naturally through these longer-than-average songs.

In fact, the two longest songs on the album are my favorite; these guys have a chemistry that creates great jams, and with enough space, they will take you on a journey : “When Time Stood Still” opens the album on an energetic note, with an almost Kyuss-like take on their 4-to-the-floor, driving verses complimented by a huge chorus that breaks down into a psychedelic bridge that builds into a huge finish. “Goat Mushroom” is fucking awesome. The guitar solo towards the end is worth the wait, preceded by huge, spaced out chords that progress into one of the coolest stoner riffs I’ve heard in awhile.

This album is a huge improvement from the already-awesome “Zigurat“, so it looks like they will only get better from here. Sergeant Thunderhoof has definitely put in the time and has the talent to be the next big thing in Stoner Rock, so be sure to check them out, because you will hear this name again.

These guys have an awesome promo pack with their new album, which you can grab here, but you better get on it because there are only 100 available.