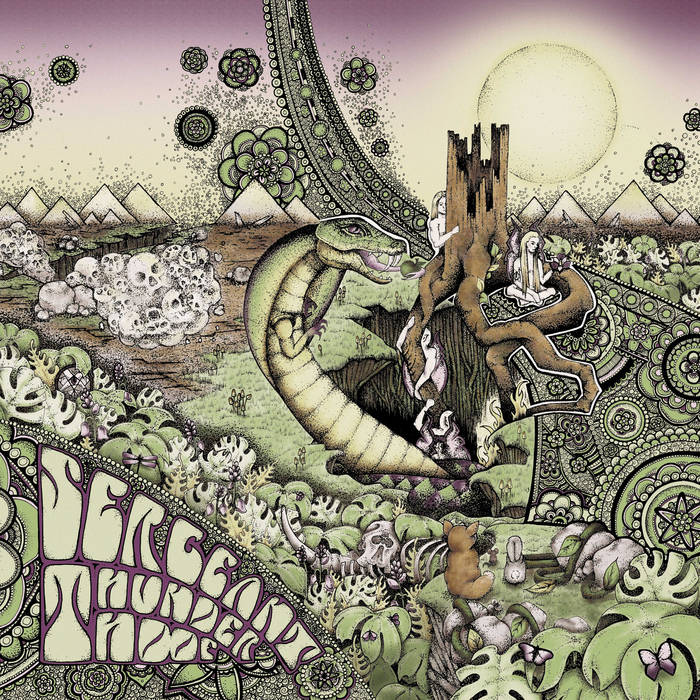 I applaud thee who let The Hoof' out....

On May 12 Terra Solus is upon us, the 3rd album by Sergeant Thunderhoof, a Heavy Rock four-piece hailing from Somerset, UK.

Being totally unfamiliar with their previous efforts I blindly checked em’ out and was it the right choice? You bet your hoofs it was! ^^

We’re also premiering the full album just below, so make yourself comfortable and get your dose of fuzz !

What you get is Stoner rock with influences from doom, heavy blues and some psychedelia.
The songs are well crafted with attention to detail, with songs being around the 6 to 8-minute mark they mix it up enough to keep your attention.

Right from the start, you get two heavy bangers full of excellent riffage and vocals which I think stand out.
Weirdly though in Stellar Gate Drive the singing reminds me of heavy metal from the 80’s but mainly you hear influences of Stoner rock in its core with lots of groove in the guitar playing.
Something I think takes Terra Solus to the next level is the guitar soloing which most tracks have.
There’s a melodic touch with space rock vibes and together with great bass and drum work the Hoof bring a jam feel to songs like Om Shaantih and B Oscillation.

But if you’re out for something with a psychedelic blues-rock feeling then The Tree and the Serpent is for you, a true highlight on every spin.
One song that really stands out though and might feel out of place to some is Half a Man, with only guitar and vocals they conjure up a calm beautiful tune with a melancholic touch.
A nice change of pace to diversify an album otherwise filled with plenty of heavy grooves.

It didn’t take long for this one to make its way to one of my most played albums this year.
An album I keep coming back to for their impressive sound which is taking the right bits and pieces from our fuzzy scene.
Hope you guys like it!

And hats off to Sergeant Thunderhoof!

The Tree and the Serpent & Om Shaantih.