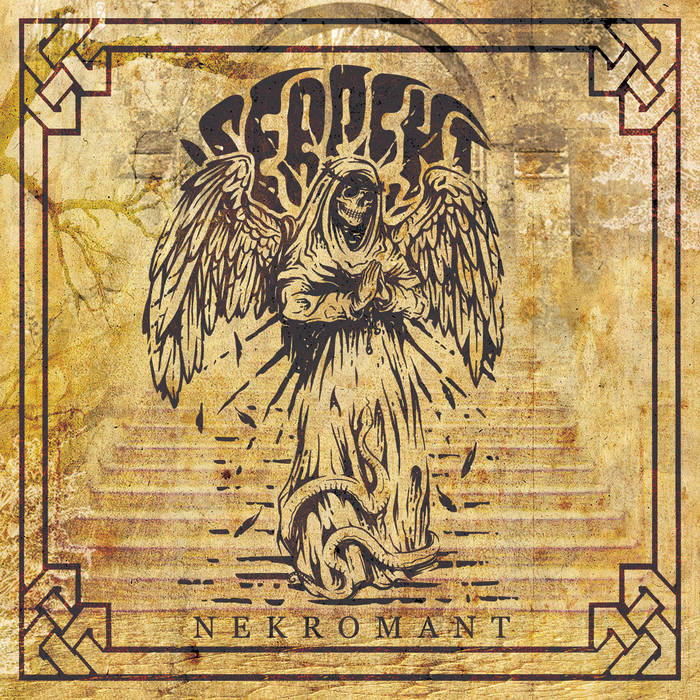 Heya Fuzzers ! Hope you all had fantastic holidays

Let’s begin 2016 with another killer Swedish band, for sure it won’t be the only one this year as you know Sweden is like the “Kingdom of Heavy Music” !

So Serpent is a 3-piece that released its 2nd full-length, Nekromant, just before the holiday season, like a pre-Christmas gift you buy for yourself and end up using it before the 25th because you wanted it so badly ! Yeah, as you’ll hear, this little gem of Heavy Rock sounds like a good ol’ Traditional Doom album, think Swedish version of the best Pentagram or Saint Vitus albums, it grooves so much

Well… IT KICKASS ! Yeah, simple as that. Serpent just put out one of the catchiest album I heard in 2015. With a massive sound, these guys crafted 9 songs carrying at the same time a very high Fat & Temperature Level.

They definitely know their classics, deeply rooted in the 70’s Heavy Metal/Doom sound Black Sabbath and the bands I mentioned in my introduction created back then. I mean, Wino should listen to this album, he would instantly invite Serpent to play with him for a song or two

Wonderfully alternating between slow & heavy parts, with those huge drums fills and some blazing “headbang riffs”, without forgetting epic guitar solos ala “Hand of Doom”, they just know what they’re doing !

Pure joy for your ears, can’t say the same for your neck…

Put on your old leather jacket, stay straight, both hands on your hips, and HEADBAAAAAANG !

Vinyl is out on Transubtan Records, get it here.