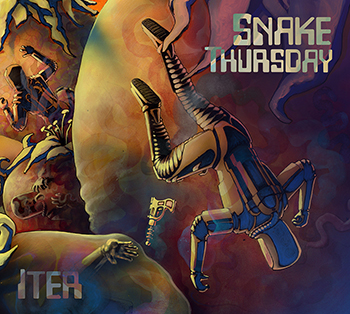 Here is another kickass Stoner band from Poznan, Poland. Snake Thursday will release their 2nd album entitled “Iter” on December 14th. But You can already listen and buy the digital version on their Bandcamp, or just below 😉

They clearly take their roots in that classic uptempo Stoner tone. And particularly in another band not so far from them, just across the sea, in Sweden to be exact, DOZER ! Especially in that punkish-heavy side of their sound. First the vocals are very similar to Fredrik Nordin of Dozer, here it’s merged in the mix with the other instruments but with the right dose of anger.

Then Snake Thursday also has its little something to not only think of Dozer when you hear them… They sometimes get away from that blazing and groovy fuzz to try to elevate your mind to another dimension, with vocals full of reverb and sweet but fuzzy riffs.

I particularly appreciate the last track, “Cosmonogist’s Apprenctice“, lasting more than 10 minutes, which has more of a jam feeling. “1990” is even a short but very cool instrumental & acoustic song. It’s like a delicious candy when you first put it your mouth, but sooner than later you begin to get that acid taste by dint of licking it ! Let the FUZZ TAKE YOU !

A good album worth a listen (or maybe 2 or 3, or as much as you like actually !). If you like well-crafted burning riffs ala Dozer and/or more psyched out stuff ala Truckfighters, then Snake Thursday is your goto band !