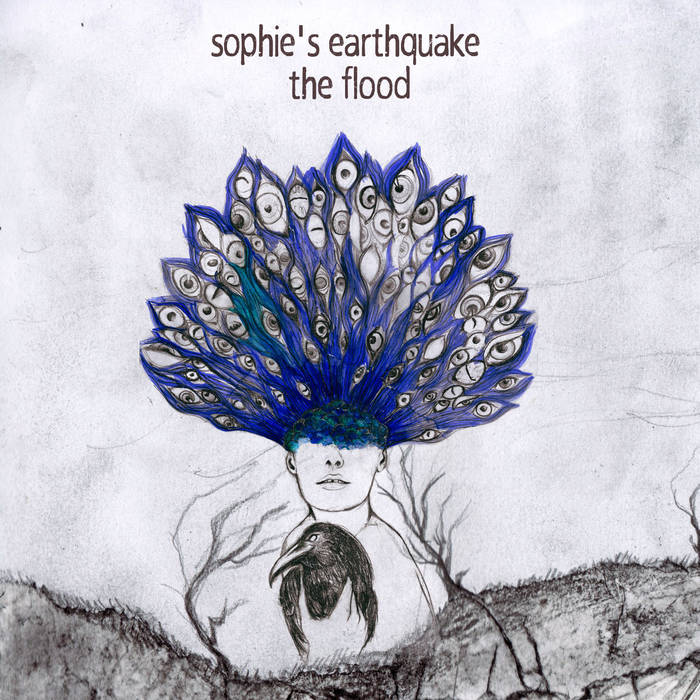 Sophie's got a flood of fresh ideas.

Hello again fuzzers, I can already tell we’ll be sharing a lot of discoveries this year! After just a mere hour scrolling through new releases on Bandcamp, I picked up 5 new albums all worthy of your time, and 3 of them were debuts! It’s gonna be a good year.

Todays’ find originates out of Mannheim, Germany under the guise of Sophie’s Earthquake. The Flood is their first full-length release after a short EP was recorded back in 2013. Reading the band’s profile, you learn they’ve been nurturing this musical outlet since 2008, and as the clever ones among you will have already figured out, that was 8 years ago. That means 8 years of experimentation, 8 years of drawing in different influences, and 8 years developing their sound.

So how does a full length debut sound after being left on the slow burner for so long? The answer is great! If not maybe a little weird too…

I’m loosing track of just how many sub-genres you could class this thing as! They categorise themselves as heavy psychedelic, and this is certainly true in the broadest sense, but it’s by no means your standard psych trip. The tonal setting for a start is at times more akin to classic stoner rock. It blends that desert rock guitar sound with a progressive song structure, and most of the tracks come in at around the 7-minute mark; there’s even an 11-minute journey on the epic Incarnation.

With such a variety of influences, what can be said about one song would sound completely irrelevant to the next. The Flood, for example, has some desolately sparse vocals harmonies, low down in the mix, that result in a dissonant and haunting chant. This plays out over a hypnotic rhythm and tons of reverb on the guitar, combining to create an almost far eastern effect, the likes of which you might expect to find on a My Sleeping Karma record. It certainly holds a Tool-esque energy to it, as each track flows with a brooding undercurrent of malice.

Jump into track 3, rather inexplicably called Dave, and it’s very much a straight shooting stoner rock song, but again jammed out to psychedelic proportion. This is the first time we hear frontman Janosch, who pulls double duty on both guitar and vocals. As if to throw the heavy psych handbook out the window, we’re treated to proper lyrics and even something undeniably chorus-like. It’s a pretty catchy tune, helped in no small part by the vocals that are strangely reminiscent of Jerry Cantrell from Alice In Chains. That whiskey-soaked southern twang compliments the songs’ subtle progression nicely. Nowhere did I feel the AIC comparison was stronger than on Zero Distance, especially on those vocals! The pace gets picked up just enough here, after the first three tracks have slowly rocked you into submission with a groove far too steady and seductive to resist. The bass guitar growls viscously towards the end, sounding mean and imposing, the way a good bass should.

By the time you get to Interlude, weightless and understated, things start to make a bit more sense. This is less one complete album and more a statement of intent. It’s a collage of all the various settings they can create. Incarnation, for example, opens up with a full on 90s grunge tone; down-tempo, dark and menacing. Then it goes off on an 11-minute journey through driving drums beats, interesting use of effect pedals and of course, some catchy riffs! I just picture the band saying : “Hey, we came up with this, which is pretty cool, but we can also do THIS, for the next SIX MINUTES…pretty cool too right?“. To which I would reply : “yeah it is, but did the guitar solo in Incarnation really need to be THAT amazing? Because now I just feel inferior as a musician myself“.

To cap it all off, Concrete Custodian stops running with the experimental baton, and opts instead to just turn around and starting beating you over the head with it; a metaphor, of course, for the sickest riff of the entire album! There’s no chance you’re walking away without this lodged in your brain.

In short, there’s a whole lot to sink your teeth into here. A mix mash of tones results in a plethora on vibes, perhaps not all even intended. One thing is for sure, though; the stoner rock mountain erupts at this earthquakes’ claim.

Alone on a blustery evening. I feel the wind and rain would compliment the brooding tone really well.

Don’t read too much into the Atmosphere Levels on this one because there are moments when you could probably give it a 5 for everything! It’s just so varied that I had to go 3’s across the board. One last thing – make sure you have your air guitar ready for Concrete Custodian 😉

Stubb – Cry Of The Ocean