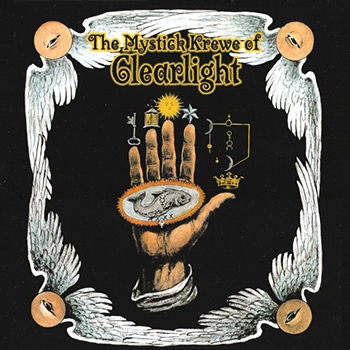 Have you seen Phil ?!

Hello my dear friends! Once again, here it goes for another review… But today’s special is a bit different! It’s been quiet some days since I wanted to share with you this band, and then I made really interesting discovery about that mystic band, so I had to rewrite some stuff in order to give you the most.

Today I want to share with you this band : The Mystick Krewe of Clearlight!

First of all, a little a bit of history, for you to understand a bit about the band. This band is a heavy-groovy-metal side-project from members from “excuse my french!” Eyehategod, The Obsessed AND Crowbar! “Woooow” you’ll tell me, and “WWwwoooow” I thought too when I discovered that point! Shit man a mega-supergroup who’ll rock you socks off! You’re right! Sadly the band, after an amazing first album, and some splits, decided to split-up, but still they reformed the band for a unique show in 2012 in New Orleans!

So they gathered together before creating the NOLA metal scene that we all know now. After seeing the Nola documentary that they released by the end of 2014 with Noisey. Down’s guitarist, Pepper Keenan, said something that really impressed me in this documentary. As a European guy, seeing guys like them in their bayou, leaded by the one and only Phil, I thought those guys they’re only into crushing, headbanging and drinking beers while eating shrimps! But I was totally wrong, it was so cliché to think about them like that… Pepper Keenan said something crucial about the groove, he was saying that whatever the music is, if it has the groove, it’s good and it totally worth a listen! And I think Pepper says it all here. The groove is the most important thing in music, despites the beats, tempo or if you’re out of tune or not, that is what it makes it alive, right?!

And believe me, here it is ALL about the GROOVE!

No lyrics, a music driven by amazing keyboards arrangements and tremendous riffs, bass and guitar together! And it is here that I want to make a round of applause to the man, Jimmy Bower! He’s known for many things but especially for being Down’s drummer! But he’s also playing the guitar! This guy is a real and true musician, he can rock his guitar as strong as he smashes his drumkit! The groove man! Fewer notes and more groooove!

So while you’re listening closely to that amazing first record, they released in 2000, you’ll clearly hear that besides jamming together, there is a real connection between them. Jamming can be related to a fact that everybody is doing his thing in a corner and there’s no real epicenter. But here they managed to give to each other enough space for them to feel free in their own instrument while riding the same wave! It is brilliant!

I deeply think that a nice groove is created not necessarily by the notes you’re playing but by the space you’re leaving in between each note. And here it is definitely the case! And man it’s really good! As you know now which musicians we’re talking about, we’ll easily hear their influences! Tremendous keyboards fills which are, most of the time, the main link in their songs. Guitar riffs clearly inspired by classic hard rock bands like Deep Purple, Jimi Hendrix! I don’t know why but it really reminded me of Deep Purple classic’s album, Machine Head! I really felt the urge to listen to it again while it was sadly taking the dust on my shelves!… And of course it is more than clear that it sounds like Earthless but without the now-classic guitar solos that we all know now! 🙂 The only things that remains is a group of friends that knows each other as much as friends that as musicians!

What they came up with is unique, a real moment of music. A moment in a lifetime, it sounds very spontaneous and true, not over-thought at all, they just played and have recorded it! Of course sometimes it sounds like a groovy version of Down mixed with a zest of Clutch, but that’s completely not a bad thing! So please go for it!! Everybody will definitely like it, I’m pretty sure! Sorry for the more spacey type of stonerheads that you are, this time your head won’t go into space, but by the time you’ll realize that, your butt will already be shaking to their groooooove!

Have a great day!
Mr. Jones

The Mystick Krewe of Clearlight Links

Burn The Sun – Crack of Dawn