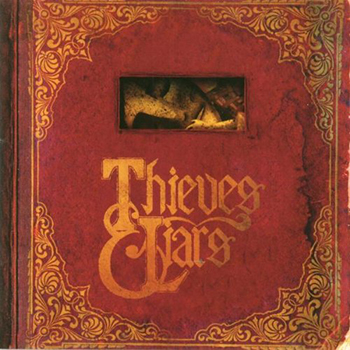 Hello my dear friends, long time no see ! I hope the sweet taste of Christmas is getting closer to you as I am writing those lines for you..! Good food, family reunion, alcohol, and lots of wax for you to feed your hungry turntable ! I’m also very curious about what you’ve ordered this year, all the Zeppelin’s remastered ? Or are you more into “modern” stuff ? Or you’re maybe just patiently waiting for the latest Elder and Colour Haze to be released ? I can totally understand you, you better save your money for later 🙂

This band I want to talk about is a very special one I’m carrying in my bag for long long years now, because it is a very special band to me. This band is called Thieves And Liars. You can Google those guys, but you won’t find much there… But the few pictures you’ll find will tempt you to scream ” ‘Murica fuuuck Yeah !” American flag on the background, sleeves tattoos, an album called “American Rock’n’Roll“… Looks like those guys are pretty proud of their country ! I got nothing about that, and I’m sure you are clever enough to don’t judge a book by its cover, right ?! So please come with me, let’s have a closer look to what they put out !

Here I want to talk to all the Classic Rock fans out there, and I know we are everywhere ! Got your attention ? Great ! So let’s start with their debut album released in 2008 called “When Dreams Become Reality“. I can easily say it’s one the best Classic Rock albums of the 00’s ! For all the fans of Led Zeppelin and Thin Lizzy, those guys know how to make amazing songs. As a trio, there is everything you are expecting from a Classic Rock band : catchy riffs, heavy drums and crazy bass fills ! AND on top of all of it, a scream, a voice that touches your soul. Goosebumps here you are again !

Looks like rockers can have emotions too, and can express them through songs 😉 If you want your daily dose of emotions I suggest you to listen to songs like “Alone”, “Forgotten”, “Seven Long Years”, or my favorite track : “The Author of Dreams” ! Man, sometimes I wonder how can a band like that can pass through the net of our community like that, they are incredible musician, with amazing talent & songwriting skills ! The production is near to be perfect, what happened here ? People you tell me..! A beautiful comet in the black sky…

All right, all right those songs I gave you to listen to are a bit depressing, I’m aware of that, but still are beautiful songs. Songs like “The Warning” or “Baby, I’m Gonna Leave You” are too, we somehow need those songs ! Besides those songs, which I consider to be masterpieces, really, Jimmy Page can be proud of his legacy (please listen to “Seven Long Years” guitar solo !).

By adding a complete orchestra behind their songs, they put colors and reliefs to their most beautiful songs to elevate them to the range of being epic songs !

But they can also give you very powerful and groovy songs like “Reconcilied“, where you can easily hear that the drummer is the real foundation of it all (thank you Kyle Rosa for the intro of “Run“).  The holy spirit of Karma to Burn’s groove is floating above their head, it is definitely a good sign that american grooviness is one of the most efficient out there. Once again, the vocalist (and bass player) Jason Bradford is providing you with great melodies and lyrics ! You can easily hear that his voice is slowly drowning in whisky, which gives him a very recognizable voice, that’s the recipe of all great Rock’n’Roll vocalist, isn’t it ? He has this ability to sing for you, to speak to your deepest soul and share with you what he thinks, what he saw and this is absolutely beautiful to me. There’s a lot of honesty in their songs.

So by mixing short and catchy songs like “Run”, “Good Times” and “Reconcilied” which don’t go more than 5 minutes long with amazing ballads, journeys, Thieves and Liars came up with an mind-blowing debut album !

I strongly think that somebody put a spell on them..!

It is the curse of the first album. I’m sure about that. Man, what a fuckin’ masterpiece ! Like lots of bands before, they sadly didn’t manage to keep the machine on for the next one… “American Rock’n’Roll“, as the title says, is more about pure Rock’n’Roll rather than expressing deep emotions… They sadly lost something on their way… Maybe it is mainly because of all the violins and other instruments they added on the first album. They couldn’t reproduce the magic that happened during live so they thought : “All right, maybe you should be more consistent and realistic during lives from our studio versions“. So they just kept their powerful and catchy songs… I really don’t know what happened here ! But still this 2nd album is pure awesomeness, I recommend it to all the people who are into AC/DC, or the unknown but still great band Tokyo Dragons (I’ll have the occasion to speak about them another time 😉 ) You will headbang for sure while screaming along their great chorus !

Nowadays, they seems to be locked in some kind of cave or something because they just stopped… Very sad for us, I was sure that those guys could have gone to the very top ! So please don’t pass near this masterpiece of their first album, run for it ! If you’re lucky enough to see snow falling through your window, buy their album or find it on YouTube, play it loud and listen to it very closely ! I never thought that people could bring the greatness of classic rock back again ! This will be my first christmas gift for you, I’m sorry that it’s a bit expired, maybe it won’t feed you musical appetite, 2 albums is not that much, but keep on listening !

Remember where we all came from !

The Author Of Dreams (told you !)