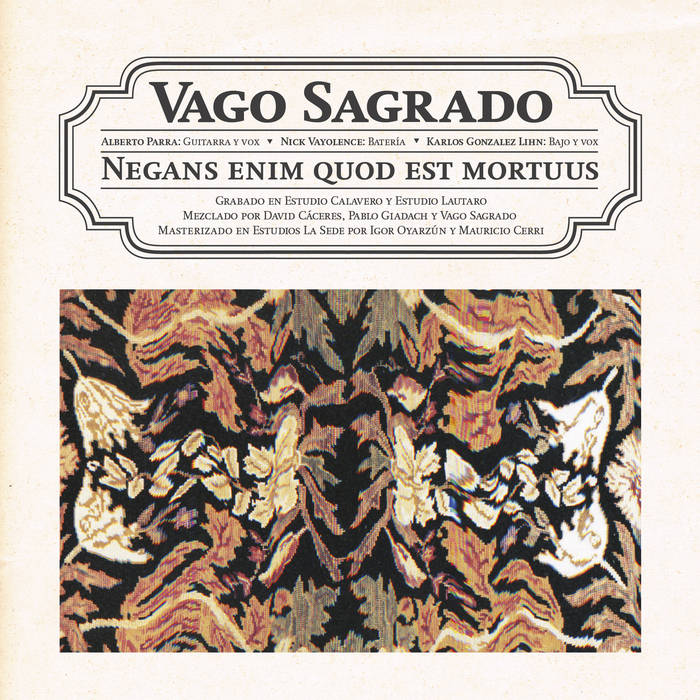 A fine discovery for Psychedelia lovers!

Vago Sagrado is a trio from Santiago (Chile). The band consist of: Alberto Parra (guitars & vocals), Karlos González Lihn (bass & vocals) and Nick Vayolence (drums). They released their s/t debut album two and a half years ago showing their enormous potential to become a big reference within the South American psychedelic scene.

The release of their sophomore album, simple called “Vol. II”, demonstrates that the band have consolidated a sound and proposal where you can identifies elements of psychedelia, stoner rock, drone, krautrock, space rock, shoegaze, indie rock and post-rock, just to name a few.

“Vol. II” album kick-off in fine way with “Ciudad Fantasma”, a song that starts with a dronish and pyschdelic intro that develops into an uptempo piece anchored in the aesthetics of post-rock and indie rock bands from the early 90’s.

The band slows down the revolutions for  “Alea Iacta Est”, “Synchronicity Highway” and “Valentina”, three songs revolving around psychedelic and space rock. You can see them as a cosmic journey, where the main character are the ethereal and fuzzy riffs. These songs remind me of bands like Spiritualized and Soda Stereo latest phase (Dynamo and Sueño Stereo albums).

“A Curious Case Of Rape” and “Normandie” find the band accelerating the tempo once again. Two short songs, both of them clocking under 3:00 minutes, intense, effective and krautrockish.

“It Doesn’t Get Any Better” is another good example of a psychedelic journey, a tune where the guitar riffs and effects transport you into a magnificent trip inside the hidden corners of your mind.  “On Your Knees” closes the album in fine way. For the last two minutes of the song, the band delivers an hypnotic and repetitive pattern, a sound very close to the krautrock scene, specially to bands like Can and Neu!.

“Vol. II” shows a band that has mature since their debut, I strongly suggest you keep an eye on these guys because they will become a reference in the psychedelic scene.

Clostridium Records will handle the vinyl release of this fantastic album in the next months. Please stay tuned!