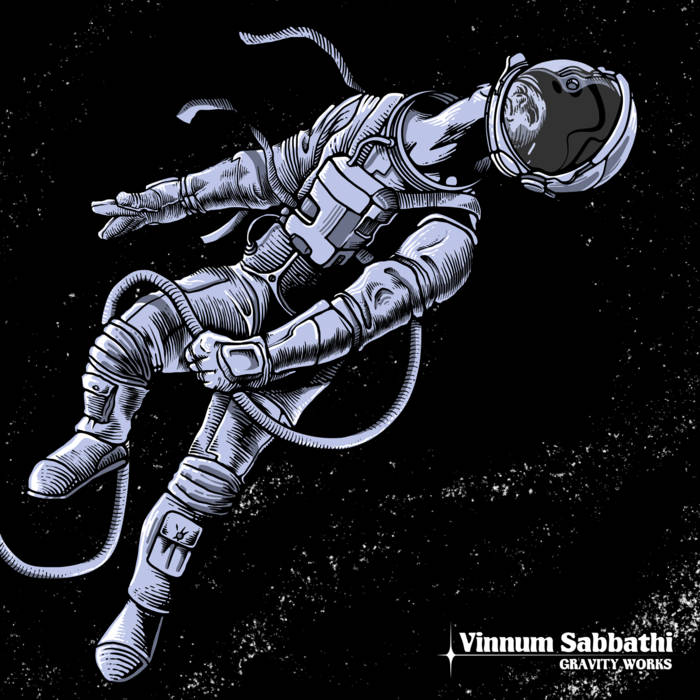 Do you feel the pressure of that chair under you? Not anymore, ladies & gents Vinnum Sabbathi!

In “Gravity Works”, the debut album of Vinnum Sabbathi, a story is told without words, a story of overcoming and conquering the immensity of cosmos by the fragile human race, that left you with a deep and cold feeling of symbiosis with space, where you implode and expand simultaneously.

Without any sense of urgency, simple as that! Vinnum Sabbathi mastered the art of slowing down, each all of the 5 songs have their own build up only to implode in a cataclysmic wall of sound driven by a bass tone that is somewhat similar to the sound of a mountain being sucked through a black hole.

The album starts with “Weightlessness”, a track filled with vocal samples of training programs from NASA powered up by a ghostly instrumental, heavy in all of its plenitude, always lurking around that mysterious empty that space is.

“Early Works” again appears with the vocal samples explaining to the listeners the characteristics of the vague cosmos and it’s dangers:

It’s evident that one of the greatest and weakest traits of the human being is curiosity as Vinnum Sabbathi describes that in this track, a steady but also kind of “nervous” instrumental behind the samples, only awaiting for the infamous line:

“The astronaut is unconscious…”

Only to switch into an aggressive turmoil of doom that sends you crashing down in your own “spaceship” at 16 G’s, with every little thing that exists in where you are right now, floating around the room as if you were being compressed against the roof fighting for a grasp of air.

As you hit the ground wondering what the fudge as happened, you hear a voice coming from the radio:

It’s the central warning you about “Gravity Waves“, you also hear another voice that comes directly from the “spaceship” that is automatically responding to the questions, you don’t know what is happening but you do know that something is wrong, all the LED’s are flashing, the doors are locking on its own, and everything is shaking profusely.

“Fear the thrill of discovery and expand our understanding of universe”

“Loop Quantum Gravity” has one of the meanest, sludgy, thick, doomy, I don’t have any more adjectives to describe this bass line… One thing is certain, it cannon balls you into the gamma quadrant in 4 or 5 secs approximately.

And the plus, you are privileged to be apart of the team of the first human beings to touch that white astral rock compound, that for some is the symbol of the decay of light and for others a goddess that guides your transcendent, illuminated and ego free life form through the steeps of the night.

The gravity is fighting, and so far has been able to maintain a balance, a far greater battle that we can be apart of, against a massive black hole with the size of the entire universe (But how big is it? An infinite cosmic form of anti matter that sucks everything, even light, into it’s depths, but what are this depths and where does everything go?).

In “The Probe B” Asimov describes that the only thing certain in all of the eternity is the fact of all the Universe is a black hole, so we’re all “doomed”, but for now let’s just appreciate one the most solid and so far best deliveries of 2017.

A small statement by the guys of Vinnum Sabbathi regarding this album:

Gravity Works has a concept behind it, going from the lack of gravity in “Weightlessness” where astronauts learned how to work in a weightless condition and goes up to the ultimate scenario in “The Probe B” as Asimov describes the last stand of gravity as the whole Universe could be a massive black hole.

The title “Gravity Works” should not be taken as an affirmation, but as the title of a book. We try to describe the different phases in which man has approached gravity and in some cases how it has been used in our advantage. All of this with heavy and distorted riffs.