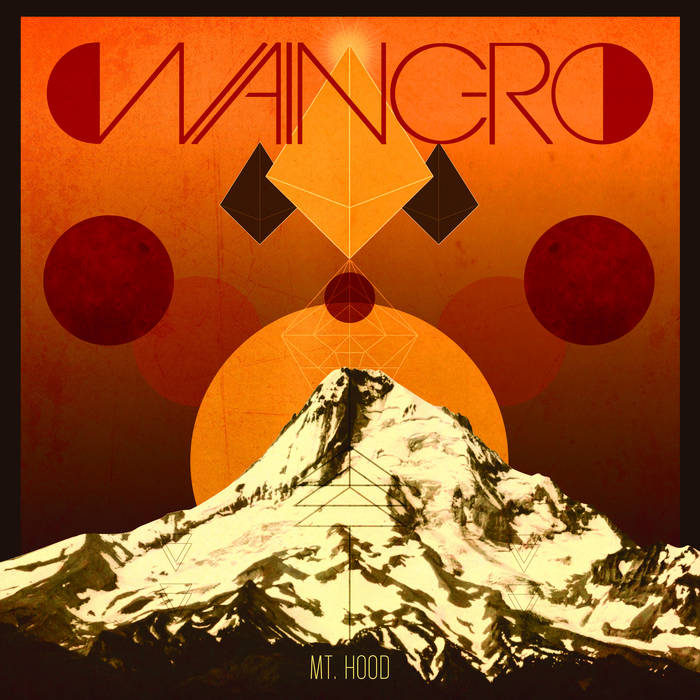 Waingro is a three-piece (as they would put it) hard rock band from Vancouver. If you ask me, hard rock doesn’t even come close to describing how brutally heavy this band is! Try heavy/stoner/sludge/doom rock perhaps and the picture becomes a little clearer. They came onto the scene about this time last year with a ferocious self-titled debut. Mt. Hood picks up that baton and runs with it, using said baton to smash a few faces in along the way.

In a word: fierce. The pacing is nothing short of relentless. There’s an onslaught of riffs that just keep coming and coming to delight fuzz-loving ears everywhere. The riffs are much more focused and melodic than on the first album, but still played with that crushing tone. The bass does a great job of being dirty enough to hold down the fuzz whilst the guitar is all the way up the fret board. Try to imagine condensing a typical High On Fire track down to less than 3 minutes and you’ll be somewhere close to how this sounds.

The vocals are much improved on this album too, with frontman Brian Sepanzyk’s piercing scream bearing an unmistakable likeness to that of Cancer Bats vocalist Liam Cormier (I say this with high praise, being a long time Cancer Bats fan). He sounds more controlled in his approach than on the debut album though, making the screams sound a little less generic which is obviously good news.

Now I can’t go on without mentioning the title track. This is so wonderfully juxtaposed against the others with its terrifying doom drones running at less than half the tempo of everything else! When bands throw a curveball like this it can often damage an album’s overall feel, but Waingro work this sludgy doom monolith in beautifully. In fact, the album actually ends up feeling centered around it.

It’s hard to pick a favourite from the other tracks because they all do much the same thing, but they do it so well! It’s as if Waingro said “Here’s a cool riff, here’s a filthy tone, oh and you’ll need some kick ass drums. There. Now piss off and have fun.”

Anywhere with enough room to swing a cat. Actually make that two. Probably not in public as one-man mosh pits in the middle of the street are usually frowned upon.

Earlier this year Waingro supported the mighty Fu Manchu. I mean, how much more of an endorsement do you need?