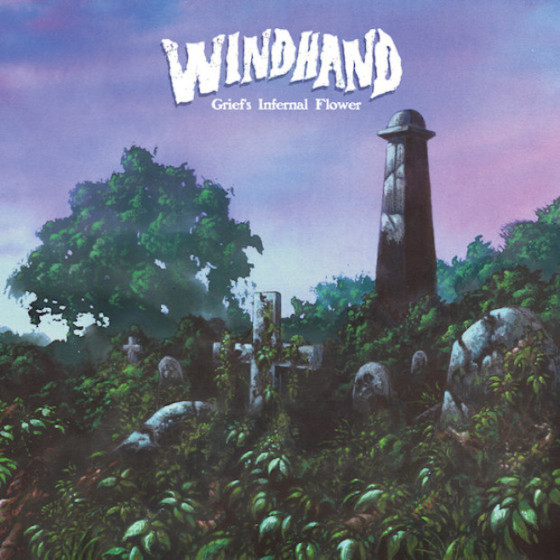 After the massive LP, ‘Soma‘, and the brilliant split they did with Salem’s Pot, both released in 2013, Virginia doomsters Windhand‘s third full-length, Grief’s Infernal Flower, was without a doubt one of the most anticipated albums of this year. After several plays, because one is definitely not enough to appreciate this record at its fullest, it is more than obvious that Grief’s Infernal Flower is a masterpiece. But let’s introduce them first, shall we?

Formed in 2008 and lead by the gracious priestess Dorthia Cottrell, the Richmond five-piece pushes us from album to album into something deep, heart-wrenching and powerful. And these feelings grow fonder a bit more at every album release. It is difficult to pin them into a music genre as they dive into stoner, doom,  sludge and grunge at the same time, but we can sense the influence of bands such as Saint Vitus, early Black Sabbath, a bit of Thou and Valient Thorr.

The whole record tends to be quite hypnotic, tends to take us away in a very very dark, cold and mystic place where fallen gods and devils intertwine.

Grief’s Infernal Flower opens with a 8 minute-long catchy and heavy single, “Two Urns“. You simply cannot prevent yourself from banging your head as the riffs get heavier and thicker as the song goes. Tracks like the fuzz-filled “Tanngrisnir“, “Forest Clouds” and “Hyperion” are easily characterized by punching bass lines while “Hesperus” and “Kingfisher” can be pigeon-holed as bittersweet ethereal hymns.

To people who are not familiar with doom music, it can sound very monotonous and repetitive and they are partly right, however, this said repetition makes all the strength of these songs. Like a never-ending spell.

Another thing that I’ve found striking in Grief’s Infernal Flower is this folk spirit going on through the record, probably inspired by Dorthia Cottrell’s solo album. It doesn’t crush the groove or the gloom of Windhand, it transcends the two of them. The folk intro in “Crypt Key“, for example, is the perfect start to a smashing hit, helped by the twin axemen Garett Morris and Asechiah Bogdan.

Grittier than ever, the Soma follow-up is the ideal soundtrack to your incoming fall or winter nights, or any other nights.

Grief’s Infernal Flower has been produced by the infamous Jack Endino, the man behind classic milestones such as Nirvana’s Bleach, Soundgarden’s Screaming Life and High On Fire‘s masterpiece, Death Is The Communion Which probably explains why this record is so addictive.