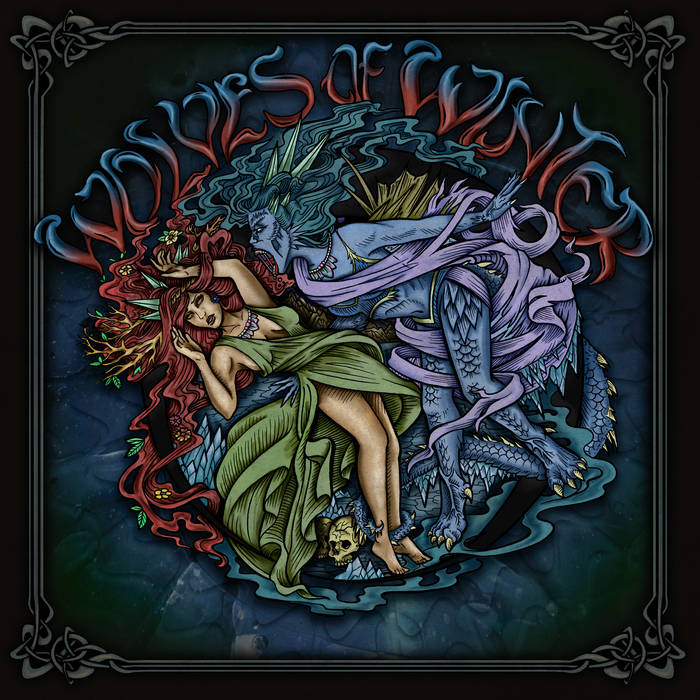 Beware of the Wolves Because They’re Starving!

Wolves of Winter is a power trio from Phoenix Arizona, they present us a very good proposal of Stoner and Desert Rock. In their sound, you can trace influences of the classic 70’s sound (Black Sabbath, Deep Purple), Seattle’s grunge from the late 80’s and early 90’s (Alice in Chains, Soundgarden, etc.) and the Palm Desert scene.

The band consists of Josh McGee (guitars and vocals), Mike Horn (drums) and David Weaver (bass), and they released their first demo by the end of 2013, since then, the heavy underground community has been waiting for their debut album, which arrived on late January, and all I can tell you is that the long wait paid the price.

What more can I tell you before you start listening to this album? Contemplate the amazing cover art released by Carie Olaje and Joseph Rudell of Ghosttown Graphic Art, the people responsible for the artwork of Ripple Music’s “Second Coming Of Heavy” Split Series, and enjoy the ride.

This self-produced s/t debut offers to the listener, in just 33 minutes, a well-balanced musical experience of all the things we love of the heavy underground sound: heavy riffs, good melodies and solos, groove and fuzzy basses, powerful drums, harsh vocals and heartfelt lyrics.

The album kicks off with “Astrothoughts” with a heavy and trippy vibe thanks to some intricate guitar riffs, a massive presence of the bass guitar, the hard sound of the bass and snare drums, and the ethereal vocals provided by their guitar player Josh McGee. “A New Reality” goes completely old school with a Sabbathesque vibe since the beginning, a very good song with some amazing lyrics.

“Tooth And Nail” is a track with a strong musical signature anchored in the Seattle’s grunge sound. On this particular one I enjoyed the bass arrangements quite a lot. For “Start Of The Season” the band immersed into blues rock territory, playing very cohesive way, we can also appreciate Josh delivering some passionate singing. The fifth track, “Blind Leading The Blind”, is a very good instrumental song that closes the first half of the album.

When I listened to “Devil’s Kiss” I thought for a minute I was listening to Trouble, because Josh sounded a lot like Eric Wagner, and I say it in a good way! On this one he alternates between clean and harsh vocals, and the results are quite good! After that comes “Rubber Band”, another song with a strong grunge vibe on it.

I really enjoyed the lyrics of “Child Reasoning”, another song inspired by the masters of all things heavy (Black Sabbath of course!). The trio sounds tight on this one, reflecting that their musicianship has become stronger since the days of their first demo. The album comes to an end with its more “metal” songs: “Manipulation” and “Try Till Death” the ones which provides some space for Josh to deliver some good guitar soloing.

So there you have my fellow music lovers, Wolves of Winter made and incredible debut album, combining the best elements of the heavy and hard rock music to create a proposal that sounds fresh and fun. Have a listen to this one, I know you’ll not regret it.

Check their bandcamp profile, you can order physical copies of their CD and get them signed by the band. Also, that incredible artwork deserves a vinyl release as soon as possible.