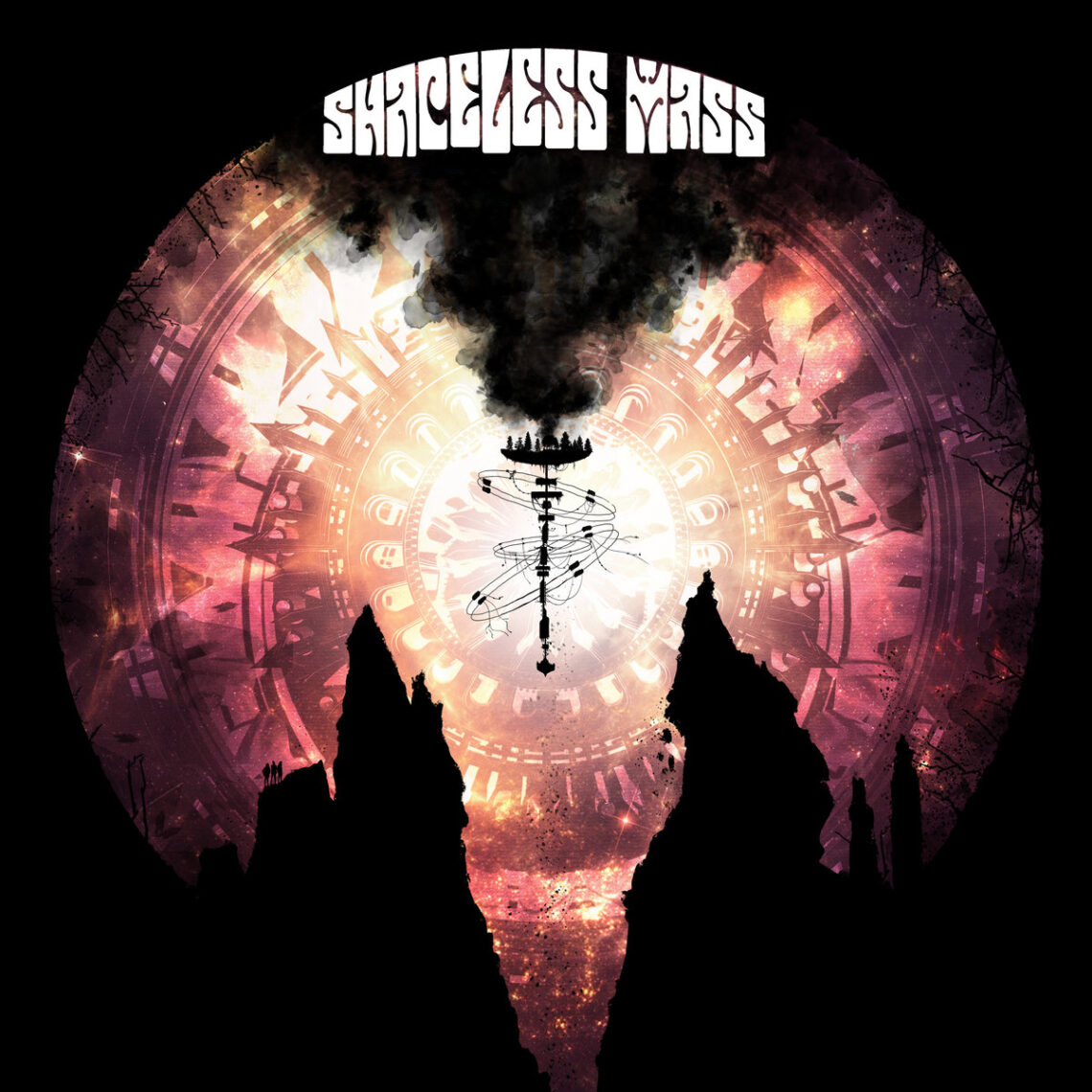 Tomorrow, the French doomsters of Wormsand are releasing their debut album, Shapeless Mass. It’s our pleasure to present you today the album premiere and review of this bad boy, along with an interview with the band.

Born in 2018 near Nice, in the warm south of France, they introduced their sonic identity with a self-titled EP in February 2019 that only left us wanting for more. They brought a wave of fresh air with their singular blend of Doom, with their strong contrast between darkness and light, heaviness and aeriality. Two years and a pandemic later, they’ve put up together an amazing debut album, relating the fall of our civilization, in a maybe not so distant future.

Mr. Momo: Hey guys. Can you introduce your band, yourselves, your sound?

Wormsand: Hi, we’re Wormsand from Menton, in the Southeast of France. We’re Julien (guitar, vocals), Clément (bass, vocals), and Tom (drums). We play Sludge/Stoner and we’re trying to mix the classic huge sound expected from bands from the Fuzz scene with our various influences (psychedelic, post-rock, post-hardcore, rock in general…) to give our music a more personal touch.

Mr. Momo: There are not a lot of Stoner/Sludge bands in France, and even less in the Southeast France, which is not really known as a “heavy music” land. So where did you get this absurd idea of playing this kind of music?

Wormsand: Playing Sludge/Stoner seemed natural to us as we started listening to this kind of music a few years ago. Clément and Julien played in a Doom/Stoner band called Clystone before creating Wormsand. From outside our area, this idea may seem “absurd” but, even if the Southeast France’s scene is not the most followed, some bands, venues, and collectives are actually growing and presenting very interesting artistic projects, which is very positive and give us a very dynamic and encouraging framework.

Mr. Momo: You released a first EP in February 2019, with songs like “Weedosaurus”, “Bûche de Ramonage” (Chimney Sweep, but in French, we use “log” to describe very heavy music, so the play on words is a bit lost in translation) or “Michel Sardoom” (from singer Michel Sardou).

Let’s say it was all not very serious. Now, the “Shapeless Mass” LP has more “traditional” song names. What happened?

Wormsand: We had fun with this idea and absolutely don’t regret this choice for our EP. “Shapeless Mass” is a concept album, every song has its place and significance in the album so it was just natural to us to consider track names as titles of the chapters of the story we narrate in it.

Mr. Momo: Why did you decide to mix clean and screamed vocals?

Wormsand: It is pretty simple when we (Julien and Clément) started to play together a few years ago, none of us wanted to sing but we were already both able to do it. As we have the chance to have two voices that are very different, we decided to divide the singing parts trying to create contrast within the songs. In each part of the songs we try to use the voice we find more appropriate.

Mr. Momo: Your music also mixes very heavy riffing with cleaner, not saturated parts, how did you come up with that decision and stuck to it for your EP and now, LP?

Wormsand: As we said before, the concept of creating contrast in our songs is dear to us. We think there is a difference between monolithic and monotonous music and the best way to make heavy music without making it annoying is to “aerate” it with cleaner moments. We love heavy music but we also listen to a lot of different music styles including a lot of soft stuff, so it definitely influences us.

Mr. Momo: Is the name Wormsand a Dune (by Frank Herbert) reference?

Wormsand: It absolutely is! We loved the concept of the Sandworm, as there are already bands called “Sandworm” we decided to swap the two parts of the word to make it different (even if not grammatically right!)

Mr. Momo: What effect did the Covid crisis have on you, besides not being able to tour?

Wormsand: Obviously, it delayed the release of “Shapeless Mass” because of the lockdowns that slowed down almost every step of our work. Of course, it prevented us from touring but we tried to keep composing and we had time to make video clips to support the release of “Shapeless Mass”. We also had the chance to record a live session thanks to the team of MJC Picaud in Cannes that made us play in a live stream alongside Verdun so we’re impatient to come back on stage but tried to take advantage of the time we had, as we usually don’t have 5 minutes to rest!

Music Video for the song Escaping

Mr. Momo: Anything you want to add?

Wormsand: Listen to “Shapeless Mass”, share it if you like it, and tell us what you think about it! We put a lot of effort into this release and we are really proud to finally arrive at the end of this so long waiting chapter which is also the beginning of the next one! We can’t wait to see you all on the road! And obviously, thank you More Fuzz for this interview! Cheers!

The first song sets the mood for the whole album, somewhere at the crossroads of Doom, Heavy Psych, and Sludge, with hints of Prog, Noise, and Grunge. These three guys know what they want and they don’t take it easy, so brace yourself. It starts on a slow and smooth doom vibe, with a kind of Mars Red Sky vibe induced by the ethereal feeling of the clear voice of Clément, but as soon as Julien starts growling, you know it’s gonna be more than that. And quickly the sound reflects that, getting slowly nastier.

‘Over Gaia’ takes over this progression, pushing it even further, while showing other nuances of tortured and dissonant inflections from the trio’s abilities. After a more quiet start into ‘Deprivers’, the crushing riffs come back for our dearest pleasure, Clément’s voice wrapped in reverb contrasting nicely with the distorted gnarls of Julien. The overall ambiance and unyielding rhythm work together to make this song more psychedelic despite its prevailing violence.

‘Ebbing Out’ could almost seem out of place here, but the voice makes the connexion, and the haunted vibe it diffuses fits perfectly Wormsand‘s universe. It’s a welcome islet of peace to allow us to catch our breath amidst the fury. It would probably be more accurate to compare it to the eye of the typhoon, given its position in the tracklist, and it perfectly depicts the energies’ shift at play here.

The thunderstorm comes back directly with ‘Escaping‘, maybe the most ruthless track on the album, and also the shortest. Barely above the two minutes, it will put you right back in the mood to enjoy the second half of the record. The band really worked on the progression of the album, the songs often melting into each other, and here is the most obvious example of it. Man, I love how this flows, ‘Carrions‘ picks up the torch and brings some new energies, building upon ‘Escaping‘ in the finest way. Rhythm-wise, it’s also one of the most elaborate tracks here, breaking down and coming back a few times, in different manners, playing with us and our expectations, stirring our curiosity.

That’s what I like so much about Wormsand, in a genre that can often lazily rely on monotony, they keep the ride interesting at all times. ‘Collapsing‘ highlights this again, oscillating at first between foul sludge and opulent prog-ish developments, somehow turning it into a spacey doom atmosphere, calming down to let the groove breathe a bit.

The title track, and last one, sums up in 10 glorious minutes, everything the guys showed along the way and everything I just said. It’s full of killer riffs, hypnotizing calmer passages, appealing buildups, dissonant melodies, and unsettling rhythm patterns. ‘Shapeless Mass’ (the song, even though that could also fit the album) is pushed by a powerful forward-driven force, relentless and unforgiving, taking you with it, whether you want it or not. So best get along with it, and drift on its enchanting melancholic energy, rather than being mercilessly dragged by those vicious vibes.

Hitting rock-bottom, in a storm, shouting your frustration and consternation at the mayhem of a society surrounding us, letting it all out in a cathartic uproar.

This album is a joint release between four different labels :