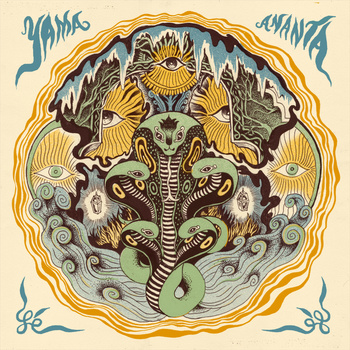 Face the God of Death !

We can clearly see the work involved in making such a marvelous record, there are a lot of cool ideas coming from each instruments, resulting in a very cohesive and massive sound. I like when bands like Yama try to give us another atmosphere than the typical “Hitting the road in the desert” one… Here, we are clearly in the heavier and darker side of Stoner Rock.

Yama is the God of Death in the Hindu mythology, a name reflecting quite well their sound. Indeed, there is that epic side, like a supreme force floating around you without knowing exactly where, trying to catch your soul to come into the land of the deads… This is remarkably done thanks to an enchanting and powerful voice and some majestic heavy riffs progressions.

This deity also tries to pervert your mind with calmer and more melodious moments, like if he gave you the belief that you should follow him… But be careful, don’t get Yama angry or you’ll endure a flood of mighty riffs and the most infectious solos on Earth !

Tremble Mortals ! And dare to face Yama by listening to this prodigious first release !