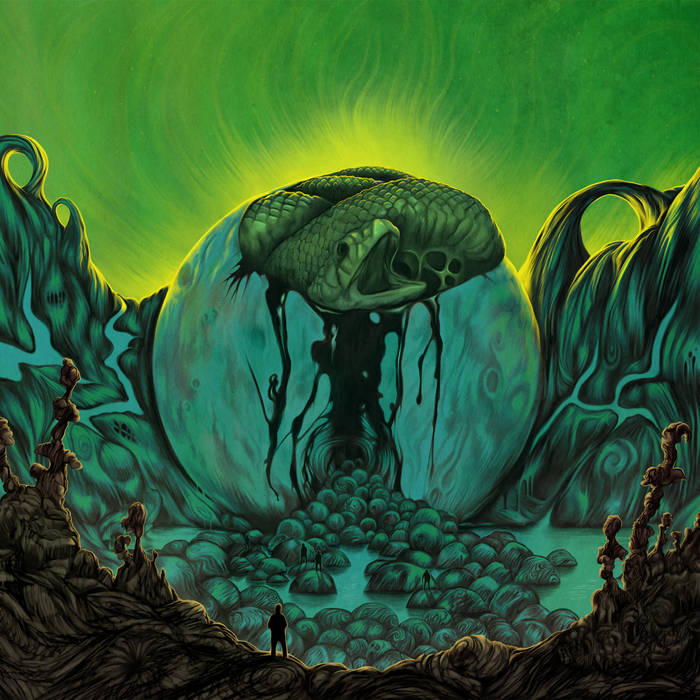 Are you ready for the Armageddon ?

Swedish space explorers take you to the edge of the known universe, in their new supersonic vessel labeled The Outskirts of Reality

Sweden is already known as one stronghold of doom and stoner scenes with bands like Monolord, Graveyard and many more. Well, I bet it will not take too long before recognizing it as a flourishing space rock land too. Why ? Because in 2012, a UFO appeared in the Swedish sky. A UFO called Yuri Gagarin. Götheborg space troopers are back on interstellar radars with their third LP entitled The Outskirts of Reality. A 44 minutes supersonic instrumental odyssey that lays the foundations of contemporary space rock.

The adventure begins with rocket-fueled “QSO”. Here you can already understand what makes the specificity of Yuri Gagarin : a hectic and loud space rock inherited from band like Hawkwind doped with modern heavy influences. From the first seconds, we are dropped into a psychedelic maelstrom created by hard drumming and modulated guitars riffs. Repeated patterns provide a solid ground to Christian Lindberg crazy solos. Lead guitarist performance works as the narration and helps to strengthen their unique sound signature.

The middle section starts with the second track “Oneironaut”. As it is more rooted in krautrock vibes, it introduces a more mental and contemplative episode. It also unveils a new face of Yuri Gagarin’s psychedelic approach. During 13 minutes, tension is perfectly managed through a hyper constant rhythmic structure and soaring guitars melodies. Drones and machines’ noises add some life to the sound and the whole music appears as a short quest throughout space and time distortions. Following “Crystal Dunes” comes back to the heart of Yuri Gagarin’s music : an epic musical trip. Atmosphere loads more electricity while drumming becomes harsher and eastern guitar melodies add some exotic influences while reinforcing the exploration sensation.

The fourth track “Laboratory 1” really is apart from the others as it constitutes a short – barely 4 minutes – exploration into experimental music territory. No rhythm or melody here: just noise from the outer space as a final experience, before to come back to planet Earth. The last part of the journey, precisely, is the eponym track “The Outskirts of Reality”. A blowing final where deep synths layers associated with an ultra energetic rhythm section give the impression than Yuri Gagarin’s space vessel is surfing at light speed on gravitational waves.

January just finished, but Yuri Gagarin might have already released the best space rock album we will see this year. Epic, modern and creative, The Outskirts of Reality does not belong to classical space rock. Actually, we do not really know what Swedish guys are looking for in The Outskirts of Reality. We just know that it is something we have never heard so far. A new attempt to redefine their musical genre, and create their own space rock recipe. It is a quest for the future. And personally, I do not want to miss this crazy adventure.

Before starting any book, movie or activity related to space exploration.

Comacozer/Blown Out – In Search Of Highs: Volume 1 Review