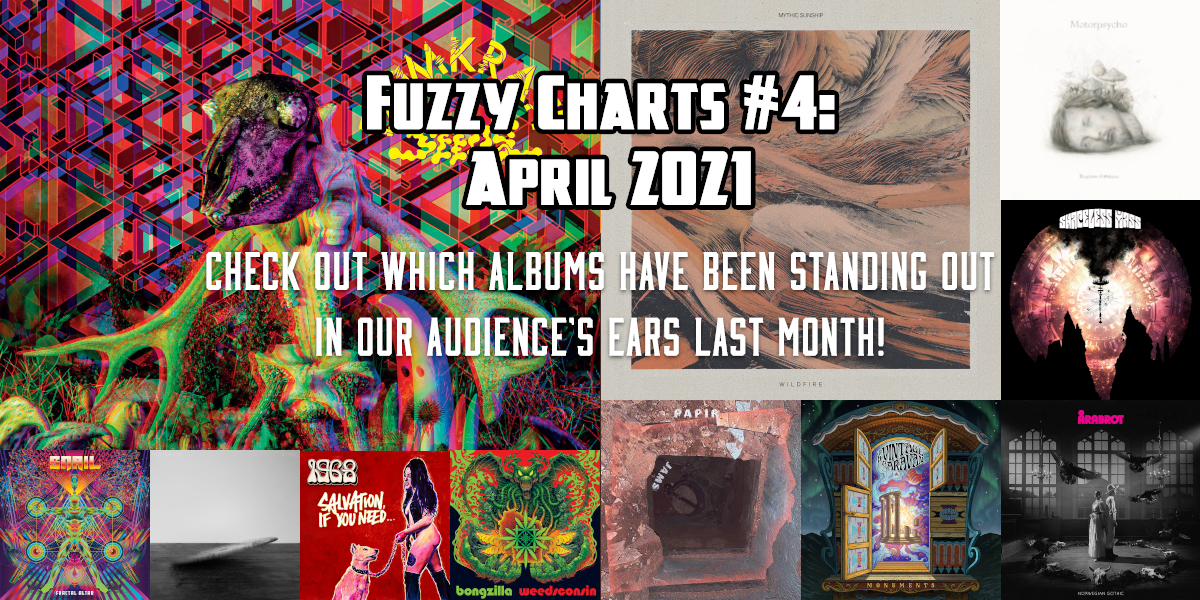 The first days of the votes saw lots of changes in the top7, with Domkraft quickly getting a heads up, which isn’t so surprising given the Swedes’ habit for top-notch quality music. With the days going and more votes coming, the order settled down progressively and didn’t change so much after that…

After Mr. Cromlech last month, this time I asked for a little help from Mr. Fuzz, who covered two of his favorites from the list. As much as I enjoyed the challenge of putting this whole list together at first, and writing about albums I wouldn’t especially choose to review on my own, I also find it quite interesting to get some input from different people, so I think I’ll keep that going in the next months. After all, our fuzzy team is one of the strengths of More Fuzz, isn’t it? 🙂

To write on this, I made myself a Spotify playlist with all of these cool albums, ordered by rank. I just put it on ‘public’ so you can enjoy it as well, almost 10h of the best of April’s fuzzy music!

Here is the result of this poll, for the month of April, enjoy!

As mentioned last month I’ll stick with a top 10ish from now on, so this month you’ll get 11, since we have a 3-way tie on the 9th spot. As usual, you might be familiar with at least some of them since we reviewed three of them on More Fuzz last month 😉

I fell in love with Snail on their last album before this one, the amazing Feral, from 2015. Their blend of grunge and stoner sounds so catchy and awesome all along. The wait has been super long until two weeks ago when this bad boy dropped, but it’s been worth every second of the wait. With Fractal Altar, the guys bring us back to their Seattle-infused signature sound, nostalgic and dynamic at the same time. I guess I’ll always be amazed by how good and especially rich their music sounds.

With an uncompromising and innovative blend of Noise, Post-Rock, Drone, and Sludge, Big ‡ Brave should probably stir up your curiosity. Hailing from Montréal, it’s not so surprising to find hints of GY!BE in their music. The trio hits us with basic but striking drumming, synced with tortured dissonant chords resonating in the air and visceral laments. It’s quite amazing how they alternate between beauty and chaos, balancing perfectly both in dissonant harmony.

1968 are back, with a release date on 4/20, 3 years after their kickass debut LP Ballads of the Goddess. Like its predecessor, this one is another pure stoner record, paying hommage, as their name suggests, to the late 60s / early 70s, with the gnarly and fuzzy sound we love so much. Killer banger from start to finish, the UK Quatuor displays the different sides of their characteristic sound as efficiently as possible. If you like groove and riffs, just click play, you won’t regret it.

Another release of 4/20, which is reeeeeeally a surprise for a band called Bongzilla, putting out an album named Weedsconsin, eh eh. It’s actually their first full-length since Amerijuanican, which was released in 2005! As long a time always make new material more than welcome but don’t expect too much change here. These guys proved along the course of their career that they know how to craft some of the best heavy filthy hazy Doom/Sludge out there.

And 25 years after their creation, that’s exactly what Weedsconsin states.

A 80+ minute Papir release? Yes please, feed me 😛 And while this one is called “Jams” and is a collection of 6 unreleased jams recorded last year, I just feel like it’s another regular Papir album. And whenever Papir releases something I’m happy.

The Danish trio has always been a “jam band” for me. Even if I can understand they surely work more on the composition for their regular albums, this one feels more Papir than ever. Those kinds of beautiful and fluid jams can only be done with pure musicianship between them, and after more than 10 years together, it truly shines here.

With their classic repetitive rhythm patterns and layers of psychedelic melodies, the voyage with Papir is always gentle and reassuring, to take you on a mind-bending trip around the universe 🌌

Our favorite Icelandic retro rockers are back with not one, but several “monumental” tracks (see what I did there), and they continue purveying that contagious energy we love with their music ⚡

What’s amazing with The Vintage Caravan is you never get bored. Each song is very dynamic with a wide variety of catchy riffs while still having that easy-listening experience, particularly with the great vocals which you can chant along after a few spins. I’d say they got a bit more proggish on this one though, even poetic with 2 acoustic tracks, but their classic rock touch remains intact. Also, one thing that hasn’t change is definitely Óskar’s solos, which are all more epic than the previous one (special mention for the double solo in “Forgotten”, oh my god 🤩).

A finely crafted album that proves these fine gentlemen know how to write a proper rock album that sounds no other than The Vintage Caravan themselves, placing them even more as the leaders in the current wave of 70’s revival sound we all love.

Oh and watch their clips if you still haven’t done so, they’re hilarious 😂

If you’re a regular reader of our Fuzzy Charts, you should be familiar with those crazy Norwegians since their last EP was represented here in January.

We can feel a bit more of the evolution of the band’s music, still in their own territory, but somehow leaning towards a more appealing overall vibe. Norwegian Gothic highlights the melodic side of Årabrot‘s identity, putting the synths more in front of the mix, without conceding too much on their twisted noisy and heavy core.

Where their last EP was more an encore of the previous album, they give us this time a proper taste of their innovative genius song-crafting.

The first song sets the mood for the whole album, somewhere at the crossroads of Doom, Heavy Psych, and Sludge, with hints of Prog, Noise, and Grunge.

‘Shapeless Mass’ is pushed by a powerful forward-driven force, relentless and unforgiving, taking you with it, whether you want it or not. So best get along with it, and drift on its enchanting melancholic energy, rather than being mercilessly dragged by those vicious vibes.

Blurb taken from my review, read it in full here, along with Mr. Momo’s interview of the band!

The Norwegian masters are back at it, keeping up with their relentless rhythm of releases, putting out this 1h10 LP only 8months after The All is One… As usual, it’s a brilliant piece of Progressive Heavy Rock, that keeps showing those veterans’ mastership of their sonic universe.

Kingdom of Oblivion is full of metaphors and criticism of our degenerative society and decadent civilization, projecting us into what the future has in store for us. Spoiler alert: it doesn’t seem so bright. They still manage to make this dire forecast sound so beautiful, with a few gleams of hope showing through the thick clouds.

Motorpsycho keep expanding their universe of symphonic heaviness, displaying nonchalantly their tremendous mastership and composition finesse. They took a bit more time on this one to experiment with their gentle and melancholic side, which also fits more the topic and the global situation these days (‘Dreamkiller‘ gets me every time).

The progression through the album is perfectly thought, as one could expect from these guys (climaxing perfectly with ‘The Transmutation of Cosmoctopus Lurker‘). Kingdom of Oblivion goes from bangers to exploratory pieces, with a few peaceful interludes thrown in here and there, always with this characteristic spark of progressive genius. Motorpsycho is taking us, more than ever, on a wonderful sophisticated journey, above the clouds and through the (shit)storm of Mankind’s craziness, taking some height to give us a better overview of the wall our species seem so eager to be crashing into.

Even if that’s not so surprising given what Mythic Sunship have used us to, Wildfire is filled with so much astonishing material, sheer talent, thrilling emotions, fluid jam feeling, intuitive composition mastership, perfectly sounding harmonies, glorious dissonant freak-outs, refreshing sonic explorations, and overall consistency that it’s really hard not to be surprised still.

Mythic Sunship managed to release yet another stunning masterpiece, and we can probably expect at least a few more where that came from. I don’t know about you, but that is definitely a comforting feeling for me. Now let’s hope we will have managed to unearth and decipher everything Wildfire has to offer before the next release!

With Seeds, Domkraft doesn’t deviate from their hallmark sound, that many define as “psychedelic sludge”. Alternating between slow to mid-tempo heavy riffing and breather moments, where the tempo slows, the guitar becomes more melodic, more acute, but always fuzzy at 11/10. Backed by a relentless heavy leaden bass on steroids and earth-shattering drums, it makes for a very particular cocktail.

The monolithic sound comes and goes in waves, unstoppable, incommensurate, repeating until the listener gets overwhelmed, crushed by the sheer volume of the sluggish liquid poured on him.

Blurb taken from Mr. Momo’s review, read it in full here, along with his interview of the band!