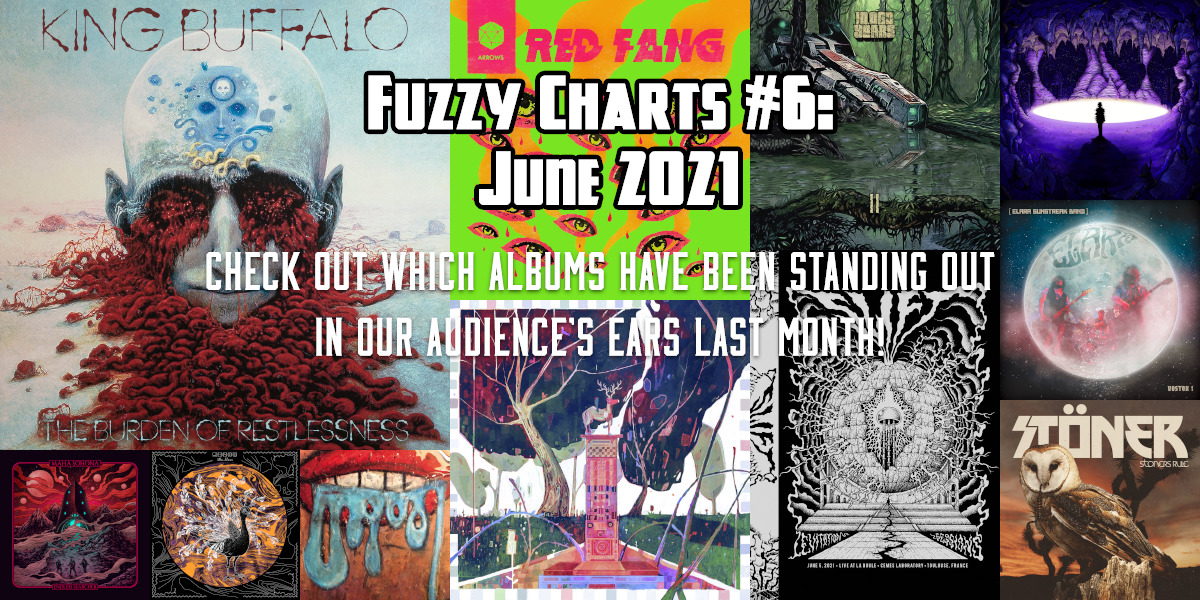 This time the winner was pretty obvious, but there are some surprises in the rankings behind that, and for once, half of the list has been reviewed on More Fuzz already!

After Mr. Cromlech for March, Mr. Fuzz in April, Mr. Black Kraken and Mr. Fuzz in May, this time I asked the whole team for volunteers. Mr. Momo and Ms. Sludge stepped forward, as well as Mr. Fuzz again, making this article a real team collaboration, with six different writers involved.

You might have gotten used to it the last two months, so once again, I made a Spotify Playlist with all of these cool albums (except Vostok 1 which isn’t on Spotify, sadly), ordered by rank. Head over there for 7,5 hours of the best of June’s fuzzy music!

Here is the result of this poll, for the month of June, enjoy!

This time, the top 10 is 11 again, with a 3-way tie on the 9th spot. As usual, you might be familiar with at least some of them since we reviewed five(!) of them on More Fuzz last month 😉

Yagow is a neo-psych trio from Saarbrücken, Germany. They made quite an impression in the psych scene with their self-titled debut in 2017 and have kept us wanting more since then. The wait was clearly worth it, as the Germans took their time to refine their blend of neo-psych, infused with shoegaze and space rock elements.

While sounding kinda classic at first, they display lots of nuances between songs, exploring quite a wide range of this genre, making one think of lots of different bands through the whole album. Recalling the Black Angels or the signature sound of Fuzz Club Records most of the time, the spacier parts could almost be from Vibravoid, and the darker 4th track could even come from a True Widow album. The Mess is a pretty good sum-up of dark psychedelia, with hints of acid and space all over.

Part Chimp might not be the most well-known band in the scene, because they don’t really fit in any of the typical « boxes » of Stoner, Doom, Psych, etc… But these 5 Londoners have been blasting noise-infused fuzzy tunes for a long time, since 2000 according to their Bandcamp description!

And Drool is actually their 5th full-length, a 12-tracks onslaught of nasty riffs directly in your face, with enough variety to keep you entertained the whole album. I personally love their raw energy, almost punk in the attitude, but with that heaviness which will certainly please a lot of fuzzers here. Also, go watch them live if you can, I remember a Part Chimp gig in DesertFest Antwerp, it was crazy af, to say the least.

Maha Sohona is a three-piece from Umeå, Sweden, surfing on the rich Heavy-Psych waves that are bringing us so many good bands these last few years. Seven years after their self-titled debut LP, the Swedes are coming back with a massive yet ultra-clear sound to delight us. They have mastered the main tricks of this genre, using wisely Prog buildups and Stoner/Doom riffage, backed up by a strong groove and nostalgic vocals.

They stand out from the crowd by the other elements they are including, like the underlying Grunge vibe, or the overall ethereal Space atmosphere. Where they truly shine is how well they manage to make it all sound together (special mention to “a Black Star” for this, with calm space textures that turn into a spacey jam before melting into nasty riffage, before coming back to the aerial vibe of the beginning), and how consistent it stays throughout this outstanding sonic landscape journey.

Stoners Rule on Heavy Psych Sounds is the studio album version of the seven songs that Stöner played for the California Desert Wizards Association’s Live in the Mojave Desert Series in October 2020. Stöner is a long-time coming reunion of Brant Bjork & Nick Oliveri from Kyuss in a trio with Ryan Güt on drum duties.

The result is just pure stoner/desert rock straight from Palm Desert “OG’s”. Fuzz, sludge, relaxed tempo, with a pinch of psychedelia and blues all on this album. The recipe for the genre nailed.

As the opening track goes… “Sh*t don’t change, Rad Stays Rad”. These musicians are no less rad now than they were in the 1990s.

Blurb by Ms. Sludge, read her review of Stöner’s Live in the Mojave Desert here.

Here comes this trio from the south of Germany whom I didn’t even know of until I listened to their promo for the brand new album called Vostok 1.

What we’re in for is 4 tracks clocking in at 16 to 20 minutes long and be ready for prog and psychedelia, which at one moment soothes your soul and the next takes you on an intense journey.

This is quite a young band but they come across more as seasoned veterans. With the quality of the long songs you only feel like the guys have been jamming for years and truly honed their craft.

Blurb from Mr. Cromlech’s review, read it in full here.

Beneath offers an album at the crossroads of too many influences to be counted, mixing and digesting over 20 years of heavy, stoner, doom, psychedelic, or progressive rock…

The result is unique on its own, an album that does not fit into any category like so many others nowadays.

Let us just say they have their own sound, where fuzz is the basis to build upon.

Blurb from Mr. Momo’s review, read it in full, along with an interview here.

SLIFT is definitely the final frontier when it comes to space rock, and they’re proving it once again with this Levitation Sessions.

They recorded it in a real science lab, a metallic bowl with sci-fi structures and uncanny reverberation, subliming their music.

Definitely a live recording for the ages.

Blurb by Mr. Momo, check out his interview with the band about this live album here.

10,000 Years is a quite recent stoner sludge trio from Västerås, Sweden, making their introduction to our reality last year with their debut self-titled EP. Their name comes from the amount of time that passed on Earth, while the spaceship ‘Albatross‘ was drifting through time, space and realities.

This first LP of the Swedish trio describes the return to Earth for the crew, only to witness it ruled by the Green King and other ancient gods. II is a debut LP but sounds as mature as a fourth record, with lots of depth, complexity, and nuances. It is a glorious slab of kickass Stoner Sludge Metal that will break your neck!

Blurb from Mr. Stone’s review, read it in full here.

6 years have passed since Red Fang’s latest album « Only Ghosts ». So will it satisfy the hardcore fans of the first hour as well as the newcomers? Mostly yes I guess. Because the 4 Portlanders are still delivering their own kind of Stoner Metal riffage, and even go to sludgier territories than what we were used to.

The whole album has a controversial production though, it feels muddy and goes well with the darker vibes of some tracks, while not so much with more energetic ones.

While I’m not the biggest Red Fang fan, I have to say I enjoyed listening to it!

Delving is Nick DiSalvo’s solo project name and Hirschbrunnen his first solo album. On his Bandcamp page, the American musician describes himself as a person “obsessed with home recordings”. Hirschbrunnen basically is a selection of songs he wrote during the past few years.

The result is an intimate album, a deep and dreamlike trip into Nick DiSalvo’s musical universe, made of endless delayed, jazzy compositions and hints of epic stoner.

If Hirshbrunnen was not the most expected album of the year, it appears as one of the best surprises in 2021. Nick DiSalvo proves once again he is one of the most creative and forward-thinking songwriters in the heavy scene. And it is just a privilege to enter his personal musical universe.

Blurb from Mr. Void’s review, read it in full here.

Our three American wizards keep on going ahead on their both productive and creative path. They have already announced three upcoming albums, all planned for this year. The Burden of Restlessness constitutes the triptych’s first part. An original and intimate opus that paves the way for a definitely modern spaced out and progressive stoner rock.

The Burden of Restlessness is much more than the first part of the three albums adventure it initiates. Its creative sound signature makes it a great album in itself. It makes us want to hear the next two albums the American trio is preparing. 2021 may be Buffalo’s year…

Blurb from Mr. Void’s review, read it in full here.