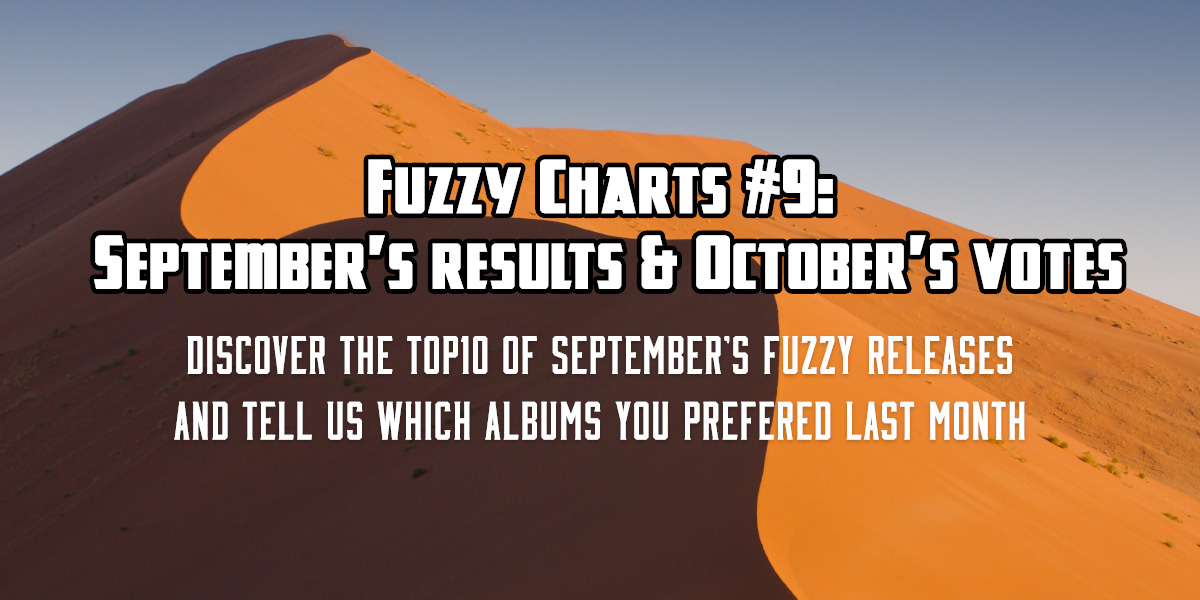 We brought back the Fuzzy Charts to make a monthly poll of the albums that left a mark in YOUR ears. If you’re not familiar with it by now, the votes are happening in our Fuzz Temple group on Facebook, every beginning of the month, for the releases of the previous month.

Like last month, Mr. Fuzz and I were super busy and couldn’t find so much time to write (the Deserfest Antwerp and Ghent reports are coming soon), so we’re doing the results of September and the votes of October together again. I’m still not so convinced by this timeline, but somehow it looks like it had a good impact, please tell us what you think in the comments, here, or on our socials, I will never say this enough, but these Fuzzy Charts are for you, and about you, so your feedback can only help us make it better.

Following our drive from the last months, this article is a collaborative work from the team, involving this time Mr. Cromlech, Mr. Fuzz, Mr. Momo, Mr. Witchfinder, and myself. This one has been a bit challenging since we published almost no reviews in the past two months, only one of these releases has been reviewed on More Fuzz.

You might have gotten used to it the last few months, so once again, I made a Spotify Playlist with all of these cool albums (except the Pilot Voyager one, which is sadly not on Spotify). Head over there for almost 6 hours of the best of September’s fuzzy music!

Like last month, we are launching the votes for last month at the same time, strangely, even with a month of votes, the numbers were not higher than usual. The votes for October have just been launched in the Fuzz Temple group, so please head over there (or click on the link below) to cast your votes for your favorite albums of last month.

You can vote for as many albums as you want to, and also add some if you don’t find them in there, you only need to respect one rule:

The albums need to have been released in the last month (so October for this one).

Cast Your Vote for October there!

Don’t hesitate to share this post or the poll directly because the more we are, the better it will represent what we all listened to this month!

Here are finally the results of this poll, for the month of September, enjoy!

Low numbers and tighter counts again this month, but then again, no big-name released anything, so I guess it is not that surprising, but still a super diverse and interesting list!

This record is probably my favorite from September, and if you know me a little, you already know what to expect. Pilot Voyager is an overly prolific power trio, hailing from Hungary, signed on the killer label Psychedelic Source Records. This release is actually a recording from the Fantazery Festival, which happened in the Ukrainian Carpathians last summer.

Roadtrip to Fantazery is a kickass release of four jams above the 10min mark, melting groove, unstoppable rhythms, and spacey thrusts. Each track is a sort of journey on its own, with its own atmosphere, connected together still to result in that mind-bending road trip through the stars.

So put your earphones on, close your eyes, and let your mind drift away on those spacey jams…

Holy Death Trio is the first band that joins Ripple Music via Rob “Blasko” Nicholson (Ozzy Osbourne’s bassist) who took them under his wings for this first collaboration.

The Texas-based trio is a ravaging bomb of classic Heavy Rock with a « no fucks given » attitude, something I haven’t heard that well done since The Shrine. Burning riffs upon burning riffs, these guys are totally rippin’! And you know how I love a good solo? Well, each song has one (or multiple!) killer solos in it and tons of the wildest of licks! But as everything goes so fast with Holy Death Trio, you just want more and have to start again from the beginning…

So go grab a cold beer, press play, and let’s get the party started and RAWK the hell out of it!

How about this for a release pitch: Lost master tapes from a 2006 recording were “magically” found 15 years after. The band, Solarius, comes from Sweden and features Graveyard’s guitarist Jonatan Ramm.

Listening again to these killer solos from Jonatan feels so good, the one in “Universal Trial” is a prime example of his talent and great feeling!

So yes, I’m very pleased those tapes were found again, because I always preferred the early-Graveyard vibes to their newer stuff, and this is exactly what you’ll get here with this EP from Solarius. I only wish it’d be a full-length!

Cripta Blue is a power trio coming from Italy who are not afraid of showing their love for the doom metal of the early years. So it’s definitely not the most original album you’ll hear from this list, but you can feel these guys are having fun and play what makes them headbang, and in the end the listeners as well !

Yes, you can feel the rawness of the production that fits well with the style of their music, and of course, the overall sound is rather on the low end. But even more than that, it’s been a long time I haven’t heard such a pounding bass sound, damn!!!

Raise your arm, do the horns, and swing your hair with Cripta Blue!

Octotanker is a mysterious bit of fusion music mixing influences of noise, post-punk, space, and stoner metal influences into one refined potion. The pace keeps on shifting, guitars violently roar and ring while the commanding vocals effortlessly add an element of hysteria or eerie comfort to the equation.

What is one of the album’s strengths is the constant melancholic emotion that it evokes with both its dynamic and the more reflective segments. The sense of open waters, hazy fields, or silent depths of space come to mind in particular when cruising through tracks like I Look Into The Sky or Conan The Astronaut 2 which are some of my favorite moments of the album.

But Octotanker holds many secrets that altogether form a cohesive trip into space, music, and time which is why it’s best perceived in its entirety and fits all so well with the gloomy Autumn days that have just fallen upon us.

Both The Body and Big|Brave are bands that have made quite a name for themselves by now. It seems fit that at some point they would look back on their influences and try to pay a proper homage to it. Leaving None But Small Birds is exactly that, two bands with lots in common, coming together to create something genuinely rooted in their souls.

Surprisingly though, with bands known more for their heaviness and thick atmosphere, the result is a beautiful ethereal blend of folk, country, and blues. That said, the emotion present in these tracks still resembles what they usually trigger in their listeners. You can also notice the plethora of details and the chiseled textures of the sounds, here again reminding of the bands’ usual compositions, along with the few droning moments here and there.

The Body and Big|Brave achieved exactly what they wanted, and put out one of the most heartfelt records I’ve heard this year, and these days are making the perfect timing for it, to go with the cold settling in outside.

Bogwife returned with The Passage Divine, a gargantuan follow-up to their captivating debut LP from 2020, Halls of Rebirth. Slow and heavy are the two primary principles guiding the way on this album as songs twist and wind under the influence of fuzz and howling vocals.

With each passing minute, Bogwife drags the listener deeper into the album where light gradually fades and the ground turns to sludge. There is a sense of scale and grandeur residing in between the chords and lyrics that is amplified by the relentlessly repetitive riffs and that makes it such an addictive listen.

Take up the morbid adventure and delve into The Passage Divine to witness this maddening sonic experience for yourself as Bogwife surely know their ways, and soon, so will you.

Agusa is one of the most unique bands from the Swedish prog & psychedelia scene in my opinion and En Annan Värld is their 5th album and the first one since 2017. The sound is full of variation and a flute adds a vibe of folk music mixed with their 70’s prog sound.

Here we get 2 songs over 20 minutes which never bores you because it flows so well through different vibes and tempos. And while not heavy, at times it can get briefly intense but this is really the type of music better suited for calm days on the couch when you really immerse yourself within the music itself.

En Annan Värld means “Another World”, which fits perfectly, and it’s a fantastic album in an already amazing discography.

The rest of these charts might be a bit soft or peaceful, so I guess it shouldn’t be surprising that the counterpart is that far from it. LLNN channels anger, filth, and suffocation into sound to crush you and any positive thoughts you might have in the next two weeks.

Musically at the crossroads of post-metal, sludge, and hardcore, the Danes use every tool at their disposal to craft the most overwhelmingly anxious horror soundtrack they can. The riffs are screaming with murder and the drums are mercilessly coming at you, with a distorted and tortured voice yelling with only little breaks (for us) to breathe, all that magnified and reinforced by enigmatic synths that distillate surreal apocalypse-like feelings.

This album is a distorted vision of our sick world, a tale about how technology and power are pushing ever faster, our society to its decadence, depriving our very existences of any meaning. Be sure to be ready for it, as it is one of the most intense sonic rides ever.

Kadabra was created during Pandemic times in the state of Washington, USA. The power trio released their first album “Ultra” on Heavy Psych Sounds (a label that usually knows what they’re doing) in September 2021 and it is definitely one of my favorite releases of that month.

Mixing heavy psych in the fashion of Dead Meadow (quoted by the band as their main influence) with some more bluesy outputs reminiscent of Graveyard, but with a heavier riffing, a darker ambient than those two bands, which will remind the listener of proto-doom like Pentagram and others. Kadabra fits the fuzz enthusiast checklist with lots of fuzzy riffing, a very groovy bass, but are not taking the easy route of delivering an album where all songs sound the same.

The album is quite varied for the genre, with more uplifting songs like Bean King and doomier ones like Death. Vocals are eerie and distant as the genre commands. Definitely a banger of a first album, and I will follow Kadabra closely.