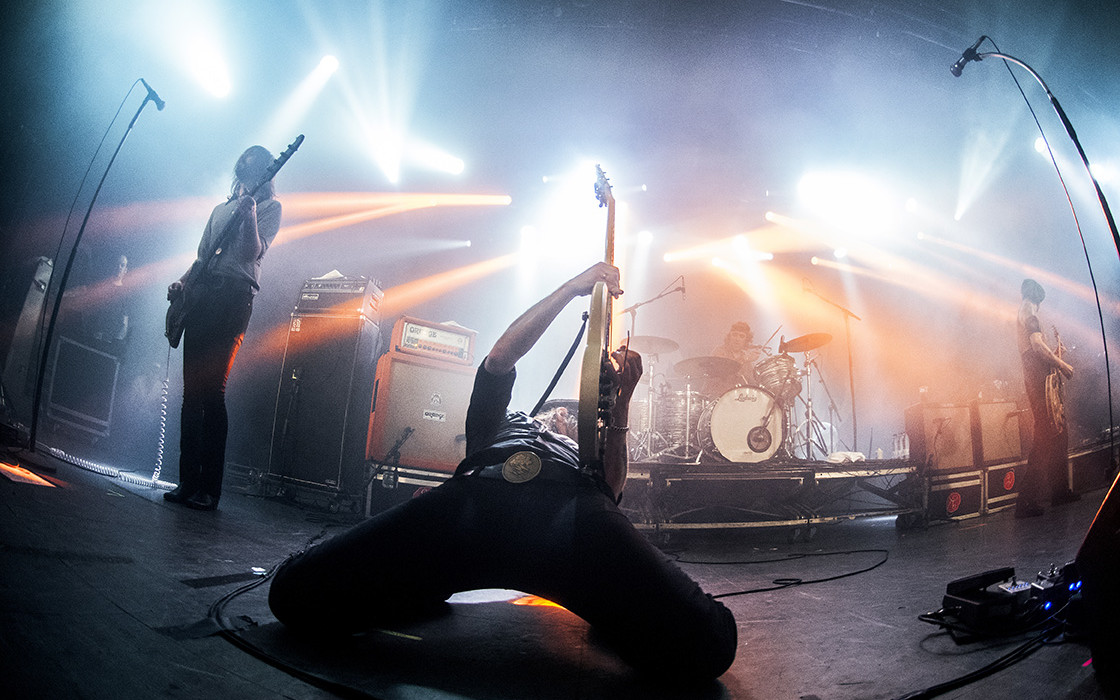 In the middle of the month with the highest gigs density in Madrid, there is an event marked in red by every fuzzer in Spain. Last weekend a new edition of Kristonfest took place in the center of the Spanish capital, moved three years ago from their previous location in Bilbao. This time, with a new format, counting to eight concerts on Friday and Saturday, instead of the six-shows marathon on Saturday of the last two years. This change was the first success of Kristonfest since it increased its musical offer meanwhile it reduced the physical tiredness of watching six shows in a row.

One of the very few downsides of the festival might be the early starting of the gigs on Friday at the Mon Live venue, in Moncloa. Probably the reason for less than half the hall attending to the first show of the festival, which is a pity given the level of the ritual Årabrot performed. Sobriety as their hallmark, classic formation of drums, bass, guitar and Mellotron (!) and a setlist blacker than squid ink in order to strike fear into our hearts. As they started to play “The Gospel”, one stands frozen trying to understand what these Norwegians have so hypnotizing and frightening. A little bit of black metal and a little bit of soul (kind of Zeal and Ardor but shadier), a little bit of avant-garde rock and a little bit of Americana (at least the amish clothes of their frontman Kjemil Nernes). A primitive sexual pulse in every chord, a thunderous voice, especially impressive once you know Nernes just passed a throat cancer, and an ominous atmosphere. To conclude, after amazing “The Dome” and an awesome cover of “Sinnerman”, “Story of Lot” finally overwhelmed us all. A hard to beat start.

This titanic task was put on the shoulders of Nick Oliveri and his Mondo Generator, a legend of the desert scene. To be honest: Oliveri’s messy past helps me to enjoy properly his stoner, accelerated hard rock. Like a Lemmy Kilmister on weed instead of speed, Oliveri got the unusual achievement of putting a crowd to air bass like crazy. Some Queens of the Stone Age and Kyuss covers completed a correct setlist, a little monotonous though. Or maybe it was just a blast of desert rock, and it is just that I was not into it.

To close the first day of Kristonfest, one of the biggest names of the line-up: Earthless, visiting Madrid for the first time. Which is to say one of the greatest bands of the growing Californian psych scene. Man, what a live show! One hour and a half of pure heat, no rest in between, split between six songs. From “Godspeed” and “Uluru Rock” until tracks from their last, much more straightforward record (“Gifted by the Wind”, “Electric Flame”, “Black Heaven”), and finishing with a “Cherry Red” cover, by the Groundhogs. Who were the perpetrators? Mario Rubalcaba, aka the mightiest drummer ever seen by me, and Isaiah Mitchell, guitarist in a trance from where he only got out to sing now and then. An impressive concert as big as the smiles in the faces of everyone who attended to it.

Church of the Cosmic Skull

Next day at the same time, the most appropriate band to start with: Church of the Cosmic Skull. This is certainly one of the most unique bands that have played at Kristonfest: five men and two women dressed all in white, with a violin, playing something between the occult-rock of Coven and a zeppelian version of ABBA. As weird as it may sound, but much more enjoyable. A surprisingly motivated audience lifted them to perform a tight, eye-catching show, with a somehow irregular setlist. Indisputable hits (“Black Slug”, Neil Young-ish “Go by the River”, “Evil in your Eye”) alternated with other flatter songs. All of them propelled by a hyperactive keyboardist whose keys are the main actor of this Church. Anyway, as it was clear in a stellar end with “Cold Sweat”, “Revolution Comes with an Act of Love” and a new, weaker track, Church of the Cosmic Skull are a bright and welcome surprise in psychedelic rock.

“The last time we played here, some of you weren’t even born”, said Fredrik Nordin at some point of his Dozer concert. Well, that is exaggerated since the average age of the attendants was probably around 40, but it is true that Dozer had been off the radar for a long time. That is why the great expectations for their show. Even though this hype usually is totally counterproductive, the Swedish are one of the pivotal bands of European stoner rock. I will tell you what they did with that hype: they knocked it out, threw it to the floor and ran over it like the bulldozer they are.

“Until Man Exists No More”, “Drawing Dead”, “Rising” and many more proved that Dozer is a perfectly smooth-running machine, designed to shoot devastating riffs, with an amazing voice and a dry, undeniable force. And that finale, with “Big Sky Theory” demonstrated that, nowadays, Dozer is the purest stoner experience available out there.

After that, Kadavar was supposed to play, but after waiting for ten minutes, three dressed in black demons with enviable beards appeared on stage. They had just one goal: to reduce La Riviera to ashes. Maybe in the past Kadavar were tagged as 70’s revival rock band, but the truth is the trio from Berlin is nowadays a doom metal steamroller. By just looking at their setlist, focused on their last and heaviest record, “Rough Times”, one can see the Berliners have chosen brute force, combining hits like “Doomsday Machine”, “Die Baby Die” or “The Old Man” with long jams. From the bass line of “Dragon” Bouteloup to the artillery of “Tiger” Bartelt in the drums (fan for showiness included) and the fantastic voice of “Lupus” Lindemann, Kadavar just plays in another division.

Frankly, even though I am quite young, I thought I had gone to a bunch of rock gigs in my life (around 300, according to my estimations). So you can imagine how surprised I was when I realized that the show of The Hellacopters was My First True Rock Gig. And I am not even a true fan.

From the moment the first chords in “Hopeless Case of a Kid in Denial” started to play until the ovation for “(Gotta Get Some Action) Now!” finished, La Riviera was Nicke Andersson’s playground. And in that playground, there were rollercoasters, water slides and bumper cars. In a fairer world, The Hellacopters and the Scandinavian rock wave they led would have been the natural relay for grunge. It was not the case, but they don’t mind at all, so two decades later the Swedish are back and ready. Twenty songs in an hour and a half, spread equitably between all their records, a decent sound, very few pauses, Dregen looking like a Jack Sparrow and Nick Royale nailing the vocals. Apart from a soundless harmonic, if the mark of a show was given relying on how many people crowdsurfed, The Hellacopters one was outstanding.

As could be expected given it was 2 a.m. and after the crater the helicopter had left behind, part of the audience left the venue. The ones who did not were lucky enough to witness an astronomical alignment. Turbowolf jumped onto the stage well aware that they had little to lose and much to gain. A classic bearded drummer, a guitarist who looked like a model, a bassist in an evening gown and Frank Zappa in a white suit formed a strange combination. And their sound is even stranger, between some amphetaminic Royal Blood and some punk, early Queens of the Stone Age. As a frontman, Chris Georgiadis, whose stage presence will be certainly remembered by all the witnesses.

In conclusion, an ideal crowning touch to avoid exhaustion after 7 hours of hard rock, bringing the 8th edition of Kristonfest to an end. We have one year ahead of us until the 9th, but I am not sure if it will be enough to recover from this one.