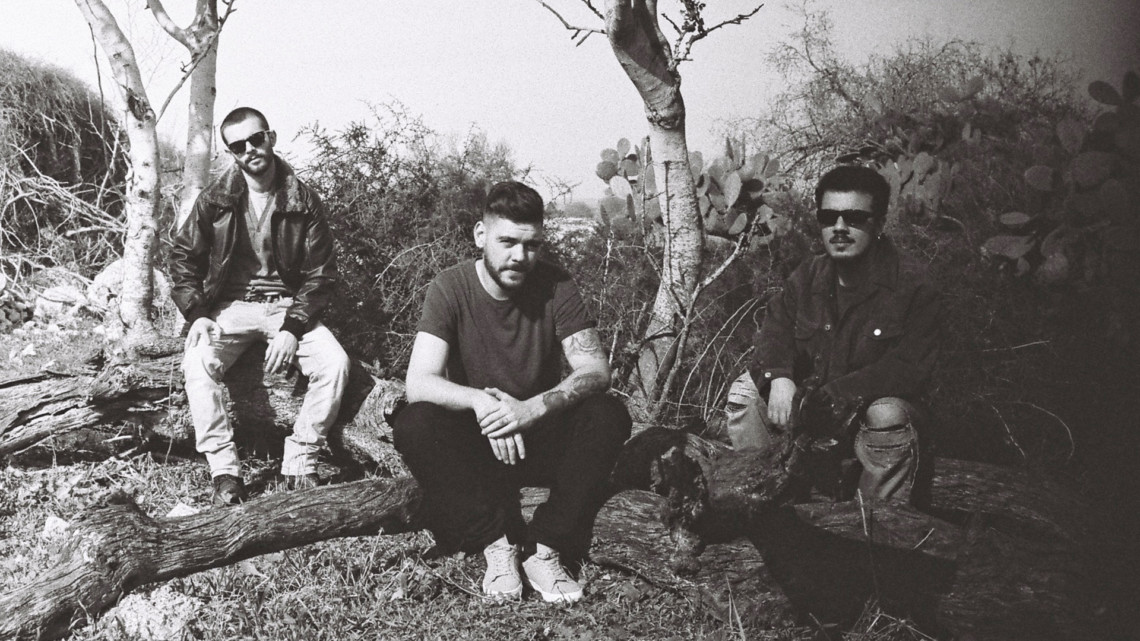 They have released their 3rd lp a couple of months ago. They ‘ve done their own release show in Athens (report here). They ‘ve released their second video. They just completed their “III Greek Spring Tour“. Last year, they have tour Europe in a 40 show run, and now they announced they will do it again! From the Eastern themes to African inspirations, to Jodorowsky-ian visual scapes and kraut/prog references the analog loving trio from Thessaloniki are presenting themselves here in More Fuzz for the very first time before the slow burning summer festivals…

Mr. Gagarin : Your name has eastern references if I stand correct. Do you have a fascination with eastern culture and religion music-wise?

Naxatras comes from the term Nakshatras, which is the name for the various phases of the moon (the lunar mansion) in Hindu astrology. Eastern philosophy and religion, which are really close, in contrary to the division which exists in the western world between the two, make a lot of sense to us as means of understanding reality. That being said, I wouldn’t say we are too deep into it, we chose the name mainly because it sounded cool and communicated the band’s sound in the best way possible.

Mr. Gagarin : In the covers of your three LPs we see mask. What’s the back story?

It all started when we asked Chris RW (our illustrator and very close friend) to design a tribal face with an ecstatic look for our first album. He took inspiration from various masks, from African to South American ones and came up with what you see on the cover. We used different incarnations of it for our next albums.

Mr. Gagarin : You also showcase your love for all things analog. Tell us about it!

We randomly found a card that said “Jesus I. Agnew – Analog Recording and Studio Engineering”. We called the number and there was Jesus talking about all this weird, nerdy stuff about the analog world. We took our chances and went to record a demo at Magnetic Fidelity (Jesus’ studio). It took two days to set up the sound and one day to record eight tracks, everything live on cassette tape. This became our first album. Because of the warm, organic sound, the vintage textures and the spontaneous procedure that comes with this type of recording, we fell in love with it. It’s all like a ritual, just being there in that moment, in that space and capturing the essence of the songs. For our next recordings we used reel-to-reel tape, but still it’s not multitrack, just two tracks, left and right.

Mr. Gagarin : If you were commissioned to work on the soundtrack or score of a movie, whose director would it be?

That’s a tough one! Something by Jodorowsky I guess…

Mr. Gagarin : What artists are you currently listening to?

It always changes. This year I listened to a lot of early ambient music, Brian Eno, Holger Czukay, Popol Vuh. John always listens to a lot of jazz and funk stuff, from James Brown to Miles Davis and so on. And Kostas is a big fan of Long Distance Calling, Yob and many post-rock/metal bands. But what we were listening to last time in the van was Iron Maiden’s ‘Somewhere In Time’ album.

Mr. Gagarin : What are the personal influences in your playing style?

John has a lot of blues references on the guitar, Peter Green, Gary Moore, Grandfunk Railroad, and of course the legends, such as Hendrix, Gilmour and Frusciante. As a bassist, my biggest inspirations are Geezer Butler, Paul McCartney, Steve Harris, Al Cisneros and Bootsy Collins. Kostas’ style is heavily influenced by the likes of Om and My Sleeping Karma.

Mr. Gagarin : In your last album beside your familiar sound, you also had the two closing songs (featuring additional rhythm guitar by Filon Geropooulos) which are beautiful ballads and structured in a typical manner (couplet –refrain). Does your songwriting process leaning in a more traditional way from your early jam based days?

In a way. We tend to approach songwriting in a mature way I think, to craft songs that can speak to the listener’s emotions and withstand the test of time. But I’m not only referring to the standard verse-chorus formula. You can play with the structure of a song in infinite ways, you can experiment on the form itself. Jamming is always a very important factor though, even if we have a pretty much formed idea, we still jam on it to see if it works and to come up with more stuff, like solos, basslines and grooves.

Mr. Gagarin : As the time goes, you evolve your light show and the visuals in your show. Do you imagine yourself evolving further your stage set up?

Definitely. The big dream is to have a huge stage construction, holographic lasers, exotic dancers, an orchestra and lots and lots of fireworks!

Mr. Gagarin : What is your motivation as artists to get up each morning and produce music?

Just the thing itself, writing and playing music is the main motivation because it is the coolest thing ever and it fills you in so many ways, emotionally, physically and mentally. We wouldn’t trade it for anything in the world.

Mr. Gagarin : Do you write something as we speak?

Mr. Gagarin : In my previous interview for More Fuzz with 1000mods‘ Labros, I asked him about a comment on the greek rock scene, and specifically what are the reasons that during this decade this scene is growing?

You could say it has to do with the very confused and delicate state that Greece was these last years. A lot of young people understood that, since the future is uncertain anyway, why not follow your dreams. And it’s also like an avalanche, people see that the music scene is growing, they are more supportive to artists and they attend a lot of gigs and festivals.

Mr. Gagarin : Finally, tell us about your future plans?

We have some festivals going on for summer, including Sonic Blast Moledo in Portugal, and, after that, our longest European tour to date. Then, back to the studio for writing stuff and jamming on them until it’s time to record them!