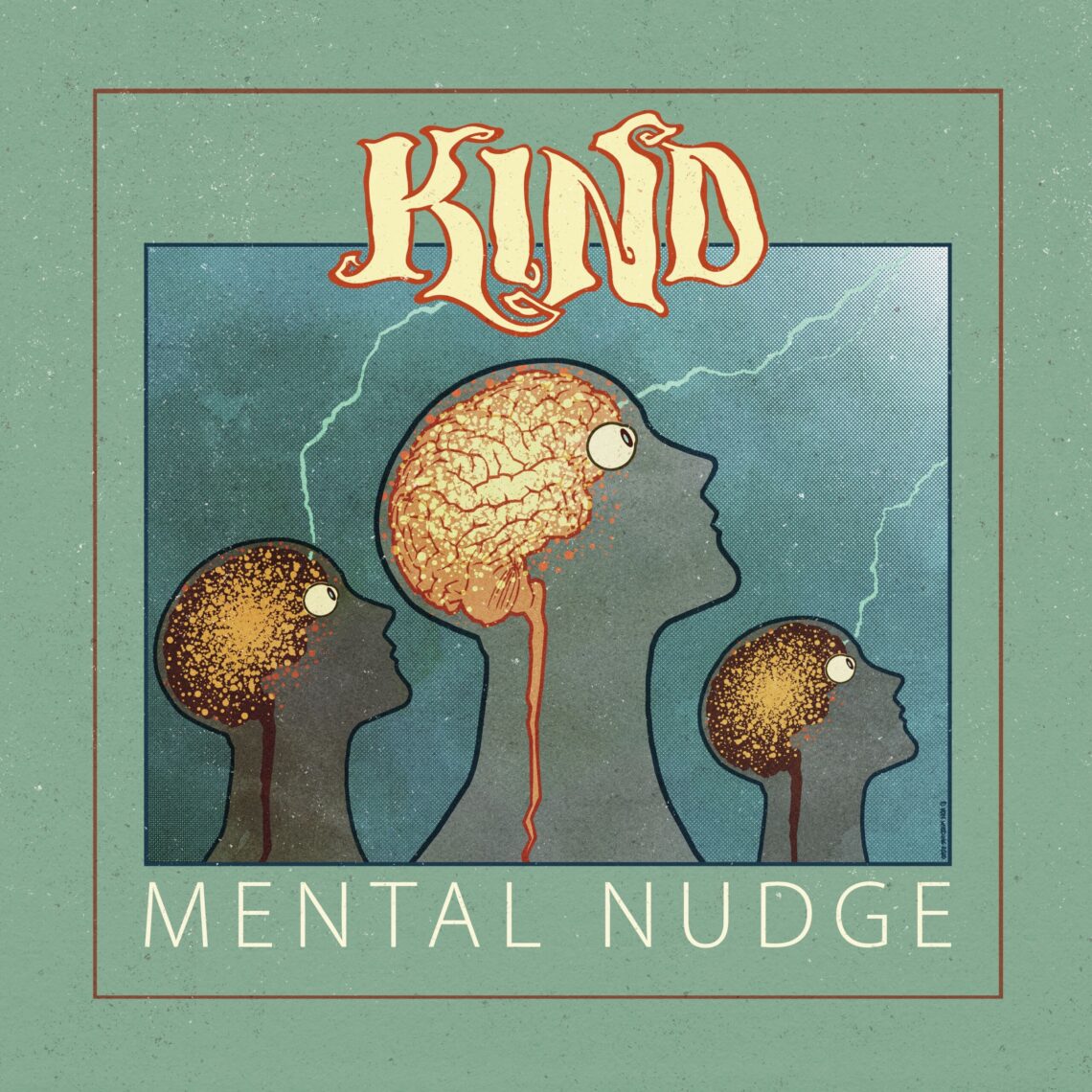 Boston's Supergroup is back with a killer Grungey Stoner/Doom LP!

Today we present you the album premiere of “Mental Nudge”, the second effort of the heavy-riffers KIND, from Boston. This Supergroup consists of Matt Couto (ex-Elder), Tom Corino (ex-Rozamov), Craig Riggs (Roadsaw) and Darryl Shepard (ex-Black Pyramid). Formed in 2013, they released their debut album “Rocket Science” on Ripple Music in 2015 and already left quite a mark with its kickass progressive heavy riffs, and crushing energy (read more in Mr. Smoke’s review here).

Since then, they toured mostly in the US, and made a notable appearance at Desertfest London in 2018. In January, they entered the studio again, at Mad Oak Studios with Alec Rodriguez (Lesser Glow, Forn, Chelsea Wolfe live sound) to record this new album, released tomorrow.

You can already listen to it in FULL, right here:

If you’ve liked their first album, you won’t be lost with Mental Nudge, but still probably intrigued. They kept their core recipe and made it evolve quite a lot, refining their specificities and bringing more into the melting pot along the way. The overall vibe stays in the Progressive Stoner/Doom territory, but the grunge and alternative influences, in the vocals, the sound and the dynamics, are really taking it further than just that. And it’s not only that simple, the Quatuor also brings lots of diversity throughout the whole album while keeping it tied together with this MASSIVE sound, Fuzzy, and Grungey at the same time.

It starts on burning wheels, “Broken Tweaker” reminds me of Lore-era Elder, with a killer progressive buildup, awesome soloing from Darryl Sheppard, amazing haunting vocals, lead and back (which wasn’t the case on their Debut I think), giving it a 90s twist already. This sets the mood perfectly for the whole album.

“Faster Number Two”, as its title suggests, cranks up the Temperature Level, straight-forward up-tempo riffing backed by kickass drumming from Matt Couto, rolling over whatever stands in the way.

After that, it calms down a bit, the atmosphere goes way darker, but also to higher spheres, with the bewitching “Bad Friend”. This song has a more ethereal feeling despite the heaviness of the bassline, thanks to the great vocals again, but also the guitar swirl starting around mid-song, taking you into spiraling winds before coming back to the riff. They speed-up a bit until the aerial singing returns, bringing back the aerial mood.

They’ll stay a bit longer in that field, “Helms” digs deeper into the 90s, with a strong Indie/Alternative rock feeling, once again mostly induced by the singing. Not as trippy as the previous song, the melodies are rooted in the progressive side of KIND and Tom Corino grants us with some sweet grooves on the bass.

“It’s Your Head” will probably stay stuck… in your head for a while 😉 This one actually sums up pretty well the album, with its super catchy riffs and chorus, cool grooves, and nifty drumming. Perfect blend of the diverse influences of the Bostoners, it takes its time with a great build-up, right-on-point almost-noisy break, rounding-up with gritty vocals.

Then comes the title track, with haunted grunge vocals and laid-back sound, before taking off with some wonderful guitar work to put us in orbit. The song is a kind of Grunge meets Doom meets Space anthem, and even if it may seem a bit weird at first, it’s easily growing and will definitely take you away.

The album closes up properly, with the slow and heavy “Trigger Happy”, an amazing mesmerizing daunting piece of doom. The vocals are more scorched than ever, with lyrics to go with it, the rhythm section crushing everything. It gets a bit more energetic when the guitar kicks in mid-song, bringing a lively riff to let the guitar burst into a spacey solo, only for a short time though, the gloomy and oppressive atmosphere coming back shortly to then dissolve slowly into a dark dreamy conclusion.

KIND definitely put the bar higher with their new album. They take us on a sublime tortured Doom trip, with Fuzz dripping amps, Grunge vibes, and trippy Noise spirals all over the place. Let yourself go with those wicked incantations and enjoy the ride!

Played LOUD as fuck, in your basement or on the highway in the middle of the night.