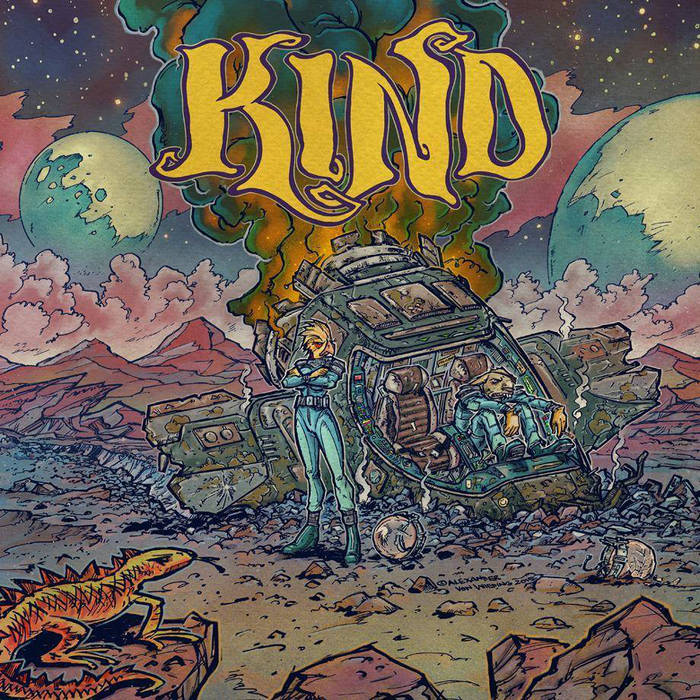 Kind is a supergroup that formed in 2013 consisting of drummer Matt Couto (Elder), guitarist Darryl Shepard (Black Pyramid, The Scimitar) and bassist Tom Corino (Rozamov). Roadsaw vocalist Craig Riggs later joined the trio to complete the sound. They released their first LP Rocket Science on December 11, 2015 through Ripple Music. It is offered as a digital download, CD, or vinyl (limited to 200).

What most obviously got me intrigued about this release is that it involves four outstanding musicians from the stoner/doom metal scene. On their first effort, the heavy psych supergroup show great promise in uniting their forces. Rocket Science is a soundscape, an experience, flowing flawlessly track after track. Kind spent a great deal of attention to varying dynamics and styles while they crafted their progressive masterpiece.

Thick, sludgy grooves are delivered effectively by cranked and fuzzed-out amplifiers. Some parts are very doomy, driven by heavy riffs and the haunting vocals of Craig Riggs, while some parts are more up-tempo, jammy and psychedelic. Blues and classic rock influences are also blended in.

One of the better parts of a debut release is the musicianship, especially from a stoner/doom supergroup. Black Pyramid guitarist Shepard shapes the sound with tight riffs and amazing psychedelic-style solos that bathe in wah. Riggs delivers haunting and powerful, yet somewhat distant vocals that add to the psychedelic haze. Couto proves once again his skills to sustain the groove on drums with his consistency and heavy cymbal use. Corino’s bass tone is exquisite and the grooves are solid, not unlike the crushing sounds of Rozamo.

This album should be played LOUD. The production is great, the amplifiers are defenitely cranked, every musician shines equally and the fuzz is monstrous. With 3 tracks that span over 7 minutes Rocket Science will take you on a fuzzer’s trip with its doomy, progressive and psychedelic sound. All four members of the supergroup have explored new territory and have created something really unique.

Played loud while smoking a doobie.

This release is a progressive stoner/doom masterpiece, the work of 4 skilled musicians united to form a supergroup. Gve it a thorough listen, you won’t be disappointed.