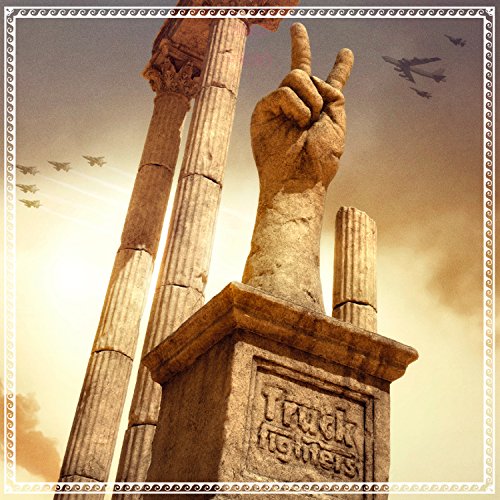 This car runs on a Tool and Soundgarden mixed gasoline, through the familiar fuzz filled desert!

As every fuzzer that respects him/herself knows Truckfighters are one of the pioneers in heavy rock / desert / fuzz / stoner scene in Europe and beyond. They made history 11 years ago with the genre-binding “Gravity X” featuring the anthem “Desert Cruiser” and since then they are the established force in our collective heavy rock subconscious.

4 LPs later, countless tours, and uncountable bands that they single-handedly and heavily influenced, they deliver their latest effort. Delving away from a typical desert rock sound, the final product is well balanced with a fuzzy foundation, Tool progressiveness, and US alternative/grunge rock while paying attention in vocal deliverance.

I love this album’s approach to desert rock genre they perfected in their previous efforts. We can hear the vocals high in the mix while guitars are sweeping everything in their way but in a new manner. Mr. Dango uses his trademark fuzzy guitar sound in a way that it not solely dominates the song but builds around it. Don’t get me wrong here we are talking about pure and thick fuzz but used smartly in a refreshing way and continuously invigorate the sonic flow. The “Calm Before The Storm” offers a standard sample of Truckfighters’ work with gigantic vocals, continually reinvented guitar melodies that drive you away.

Then listen to the middle part ( I need more cowbell baby!) of “Hawkshaw” with the mid-tempo swings and then again coming full (fuzz) force. One of the most compelling songs of the album is “The 1”, a nod to 90s grunge were it echoes Soundgarden (listen to Ozo’s voice) with stark drumming and constant riffing cementing every part of the song. Or “Gehenna” ‘s stomping rhythm with the pace changes drawing a straight line from Tool!

The progressives of Tool keeps coming along in bass-driven “The Contract” with Ozo’s well-placed vocals in terms of articulation. All of this results in a modern feeling because it adds fresh and new elements to the Swedes sonic palette. Again in the same manner that band followed from the 2014’s “Universe” but more evolved in a cohesive structure. In “Fiend” there is a constant fuzziness set in a gloomier tone. Closer “Storyline” again swings with a mix of 90s alternative rock melancholia and desert jamming.

Driving through a long road, or walking the streets of an urban scenery before sunset.