Down The Hill 2022 Playlists 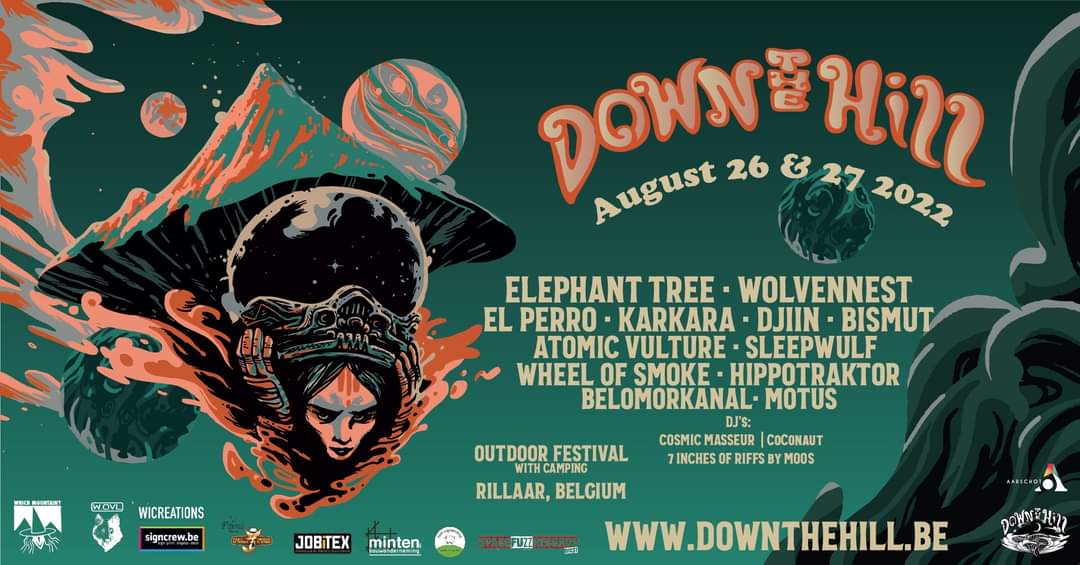 Today we’re in Portugal for the mighty Sonic Blast, but before we take off, we wanted to give you a taste of another killer festival happening in just a few weeks. Down the Hill might be smaller, but they still curated a super cool line-up. 🤩

As you might remember, we went there last year, a special 1 day only edition, given the circumstances, with already a strong line-up for this cosy intimate fest. This year, with things going back to kind of normal, so does Down the Hill, offering us the full 2-days festival experience and some super cool bands 😉

Wolvennest will bring their occult and mesmerising vibes to headline the Friday. The Belgian post-metal band Hippotraktor will prepare our tympans just before them, and after the heavy bluesy vibes of the promising Sleepwulf. The heavy task of opening the fest will lay on Atomic Vulture‘s shoulders with their instrumental heavy-psych.

The Saturday will be a bit more on the sunny side of the Fuzz, with Elephant Tree headlining (and they should bring their string section for some beautiful moments of bliss as we already witnessed at Sonic Whip). The genius Parker Griggs (Radio Moscow) will bring the burning grooves of his new project El Perro to close the fest 🤩🔥

The two bands before Elephant Tree might be familiar if you’re following the blog, as both are French and were both featured here before. Karkara will enchant us with their oriental psychedelic garage vibes, and Djiin will summon ancient powers with their crazy trippy blend of prog, fuzz and doom.

Before that we’ll enjoy the instrumental prog jams of Bismut, the heaviness of Belomorkanal, the trippy jams of Wheel of Smoke, and the newly formed jam band Motus. Quite the program and some super interesting discoveries!

So a few days after coming back from Portugal, I’ll hop in my car with Mrs. Rifffox so that we can bring you back some nice live streams, pictures, and report of it, so make sure to stay up to date with our socials! 👀

We compiled a nice Spotify playlist in the spirit of our usual festival tradition, with 2 tracks per band. The playlist order is following the running order, so you can get an impression of what kind of sonic experiences await you in Rillaar on August 26th & 27th.

Since two bands were not on Spotify, we also made a YouTube playlist, with only one video per band, but a few of those include 2 songs, so you should also get a proper feeling of what you’ll be in for then. 😉

There are some nice discoveries in there, as well as good old classics, a bit for everyone to find their happiness, and prepare for this glorious fuzzy weekend. 🔥

(hopefully) See you there Fuzzers!

You can’t make it? 🙁
Don’t worry follow us on social media and (almost) feel like you were there!