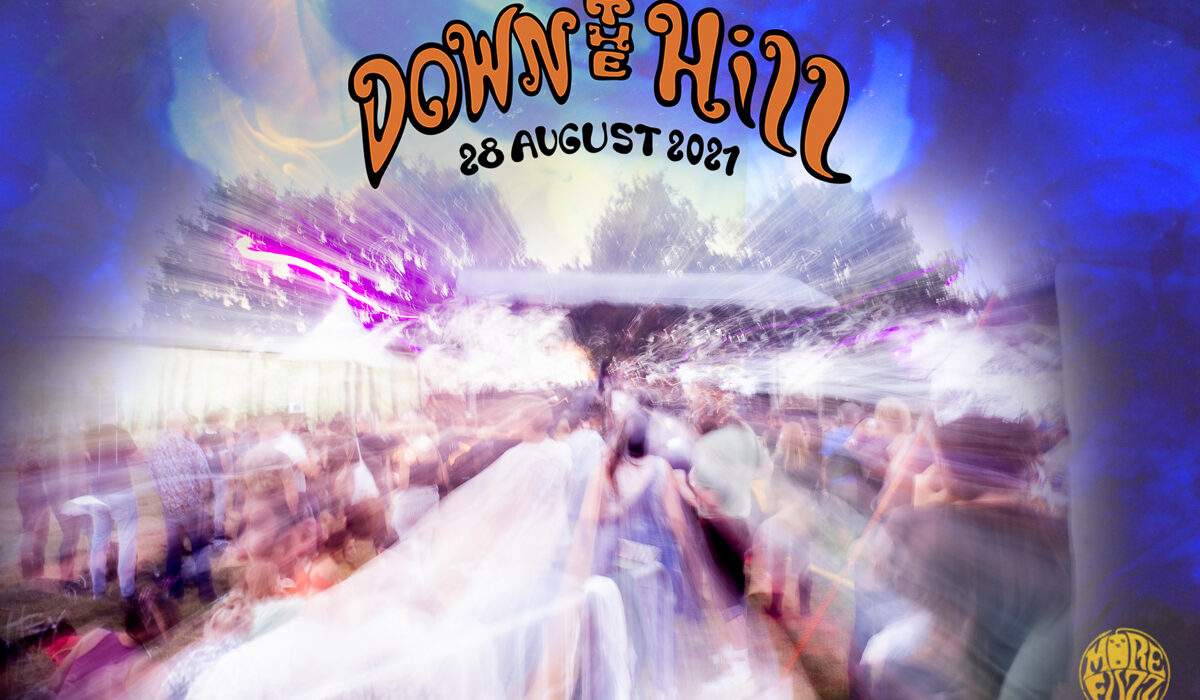 Down The Hill Festival 2021 report

Down the Hill Festival 2021

At the end of August, in the small village of Rillaar, something wonderful happened. With the numbers of Covid going down, and the restrictions loosening up, the small DIY festival of Down The Hill could take place, with only a few basic safety rules, and no social distancing. Finally, a glimpse of hope to a return of the natural order of things, music, gigs, and happenings as we used to know it, and love it, before the shit hit the fan in Spring last year.

With Mrs. Rifffox, we took our tickets as soon as the omens seemed to align for this cool festival to happen and we managed to bring you back some bits of it. I did a few lives on our Facebook page that you might have seen back then, Here is the full report.

But first, I want to thank deeply Dries, for keeping faith in this year’s edition of his festival, and for all he has done to make it happen. It was an amazing weekend and the perfect welcome back into some kind of normal life, which was more than missed. The festival was perfectly organized, and I think I can say for sure that all the people that were there that weekend, be it in the audience, the organization, or the bands, felt quite surreal, but above all grateful and incredibly happy to be able to share this moment.

Sadly the hellish weather on the road in Germany made us arrive a bit later than planned, and we only saw the last two songs of this local Retro Rock band. The four Flemish brought some fresh vibes under the sun, with a really bluesy sound, a gritty voice, groovy soli, some southern influences, and a hint of stoner on top. They assured a smooth warmup into this day with 6 promising bands still to come.

I really like Grotto, ever since the first time I saw them in Antwerp, I always make sure to catch them regularly (I even invited them to play for my birthday two years ago ^^). Musically, imagine if Elder were only doing 15-20min long instrumental tracks, and you will be quite close to it. The Flemish trio never fails to deliver top-notch progressive and psychedelic heaviness, as can be heard on each of their albums, building up their reputation with each release, culminating with the killer Lantern of Gius, released in October 2019.

I always find their music very visual, as if landscapes were flashing up before my eyes, animated by riffs and melodies, the long format of their tracks allows one to really lose track of where and when he stands. Grounded by the heaviness of the rhythm section, the guitar takes the time to explore, structuring the composition through ups and downs, unraveling a story for your mind to drift away on…

Temple Fang got announced a bit later than the rest of the line-up, a bit of a surprise kept secret until a few weeks before the fest. And what a surprise! Since their formation, and especially after getting knocked out of the galaxy after their show in Antwerp in ’19, I’m always overexcited about seeing those guys live. As you might have already read in the interview we made with them later that day, Temple Fang is a band that takes its true form on stage. So I was waiting impatiently for these four flying Dutchmen, who melt old school references in lengthy, groovy, and spacey jams.

I don’t know if it is the alchemy between them, their approach to music in this project, or the unusual elements they use here and there, but they sound quite original for a band in this niche and it’s so refreshing. They just changed their drummer, and played two jams they started with him on his audition, refined in the few weeks in between. The progression was amazing, starting smoothly, speeding up, taking a break to build some tension, and come back heavier and trippier… Those two super-long tracks took me somewhere else.

Temple Fang manages to make you travel, inside, with their calmer moments of contemplation, and to the outer edges of the galaxy when they dive full-throttle in their trippy thrusts. I can’t urge you enough to catch them live, as I couldn’t wait to see them again, in Antwerp (spoiler alert: it was amazing).

This trio was quite interesting, sadly with our interviews of Temple Fang and Monomyth coming up, we couldn’t stay so long. They brought some contrast to the stage of Down The Hill, shifting the atmosphere from the three shades of stoner we had before, into some more post-metal vibes for the next three. And Heisa was the perfect band to handle this transition, melting a kind of grunge/noise energy with post and prog elements, not shocking the audience but rather luring us in, with their intriguing sound and setup.

The bass player/singer also handled lots of effects, keys, samples, and loops to deepen and enrich the structure of their songs. The dynamics of the composition keep you hooked, building tension, making you wonder what will come next. I can only recommend you to check out their live session over Radio Rood, from last year, which should give you an idea of what that might be like. I dug a bit into their back catalog, and will for sure keep an eye out to be able to catch them in whole sometime soon, in a dark room.

Pothamus started playing while we were still interviewing Temple Fang, and ended while we were interviewing Sander Evans from Monomyth, so sadly we didn’t see any of it. I still wanted to mention it, since even from backstage, I could hear how heavy and good the Belgian trio was. Pothamus‘ sound seemed to be the result of a crash between sludge and post-rock, following the shift in sound started by Heisa to prepare the ground for Psychonaut after them. They put out a few releases since their formation in 2015 and I strongly recommend you throw an ear to some of them, especially their last LP, from December ’20, “Raya“.

Psychonaut is a band that takes its time, birthed in 2013, they released a few EPs in the next years, but they waited until 2020 to release their behemoth of a debut LP, after 3 years of composing and recording for a result of 70min of delightful heaviness! Though they didn’t needed so much time to conquer the Down The Hill Festival. The psychedelic Post-Metal Belgian trio was eagerly awaited by a good part of the crowd that Saturday. Climaxing the Post-Metal side of the festival after Heisa and Pothamus, the audience was more than warmed up to receive this juggernaut of a band. They sure delivered more than their fair share of neck-breaking riffs and haunted psychedelic atmospheres.

Their killer varied vocals and pachydermic grooves captivated the audience in the haziness of this late night. The composition is strongly rooted in prog, but it seemed so natural on stage, the rawness of the sound and performance hitting the crowd in the face, triggering instinctive reactions for the most energic gig of the day. For an intense hour, Psychonaut took us on a trip to another reality, warping our feeling of time, and soothing everyone’s need for heaviness, with simplicity, class, and brio.

The festival finished in style with the mesmerizing veterans from the Netherlands. Monomyth always manages to capture the attention of the audience, no matter where or when, and this wasn’t an exception. After the heavy vibes from the three previous bands, the Quintet took the stage, and us, on a trip to the stars and beyond. I was lucky enough to see them not so long ago, at the last edition of the Yellowstock in 2019, in the middle of the woods, already with their new guitar player. Since then, they released a new album, Orbis Quadrantis, and changed their bass player, deep changes, as evoked by their drummer, Sander Evers that we interviewed earlier that day. So I was really curious to witness what they had to offer after all that.

The result was in the continuity of their career, after all, you don’t stick around for so long without some kind of stability. That said, you could feel the evolution in the sound and composition, the band always pushing forward in their mastership of spacey psychedelia. Always meticulously crafted, their sound envelops you gently to make you travel smoothly inside and out of yourself. Despite the change of lineup and the complications they had in the last two years, they displayed the same class as usual. It’s always a delight to witness such talented musicians, united in their dynamic drive to weave an interstellar sonic highway.

This was the perfect conclusion for such an intense and amazing festival, lifting up our minds, relieving us of our bodily struggles, blissfully blowing our minds away, to dissolve in the starry night of the Belgian sky.

In between all those cool gigs and a bit after also, the party kept on going thanks to the groovy tunes of the DJs, Cosmic Masseur and Moos, bringing us quality tracks to make us stomp our feet and shake our asses. Sadly the sound had to stop at 1 AM, though the people stayed for a few hours more, enjoying the gorgeous warmth of the fire pit, and the feeling of finally being able to live again, after a year and a half of deprivation. You could feel the happiness in the air, from the first moment to the last, of all those music lovers, glad to meet again after such a long time, and to be able to come back to those precious moments that we all missed.

Down The Hill was the first festival to bring back some normality, and they did it outstandingly, providing a perfect organization and festival to a hungry crowd. Hats off to the organization, and see you next year!